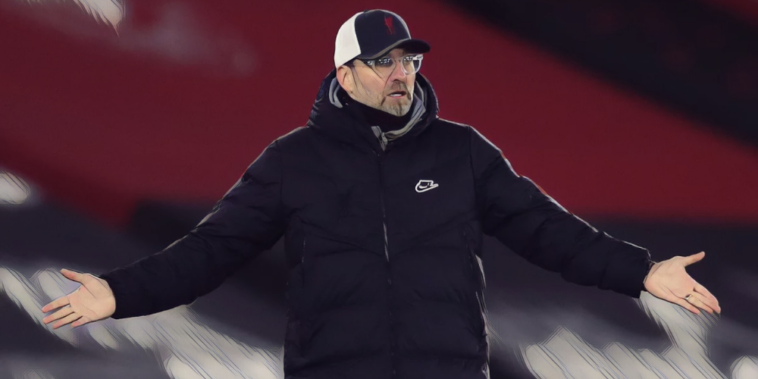 Despite scoring twice in a highly open FA Cup contest against Manchester United, Liverpool have struggled to score goals in recent Premier League fixtures. The Reds drew four blanks in games against Newcastle, Southampton, Manchester United, and Burnley despite being overwhelming favourites in three of the four fixtures.

They still have scored the most goals in the Premer League overall, and Liverpool will face few teams with the same collective identity as Southampton or who are as comfortable in a low-block as Burnley and Newcastle. Still, some are questioning whether Liverpool’s recent scoring woes could be symptomatic of deeper issues in Jurgen Klopp’s side that could hinder their ability to contest the title this campaign.

It would be remiss to analyze Liverpool at the moment without first considering their injuries. Diogo Jota’s absence has perhaps proved more costly than many initially suspected. The Portuguese international netted five times in his first nine top-flight appearances for Liverpool, but his significance to the team was arguably greater than his on-pitch contributions.

Teams have finite cycles of dominance, and some may argue that Liverpool’s current squad is approaching the end of theirs. The greatest dynasty builder in the Premier League, Sir Alex Ferguson, often attributes the longevity of his success to his willingness to constantly rebuild his squads.

But Klopp is a different type of coach, one who prizes cohesion and continuity in his playing squads. Even if he wanted to make large-scale changes to his team, COVID-19 has made the potential suitors for Liverpool’s incredibly expensive players minimal.

In light of those circumstances, purchasing someone like Jota was sensible. It rejuvenated an attacking triumvirate that threatened to go stale after years of stasis and gave Liverpool a better chance of extending their cycle of dominance without upheaving the status quo of the Reds’ squad in the way a marquee signing would. With Jota gone, though, Liverpool are left with no consistent alternative who can challenge and provide a different option to the front three in the same way.

Their defensive injuries have had more of an impact on their attack than one might assume. Without the ball-playing prowess of Virgil Van Djik, Liverpool’s fullbacks often have to drop deeper to help with the progression of possession.

Alternatively, their central midfielders will have to come deeper, which hinders their ability to generate the necessary numerical superiority further up the pitch to create chances. In the phases of play which they allow the midfielders and fullbacks to push higher, the likes of Nat Phillips or Rhys Williams haven’t proved to be steady distributors of the ball and often turn to aimless long balls when under pressure.

This is one of the reasons why Klopp has decided to use midfielders like Fabinho and Jordan Henderson in central defense. However, this creates other issues. For one, Thiago has to be used as a sole number six.

While he played in a deeper role for Bayern Munich at times, it was usually alongside another anchoring midfielder like Joshua Kimmich or Javi Martinez. Using Thiago higher up the pitch could also have been one potential solution for Klopp to unlock deeper sitting defenses.

More importantly, playing Henderson and Fabinho as centre-backs reduces the efficacy of Liverpool’s pressing by depriving them of their best ball-winning presences in midfield. This both makes it harder for the champions to sustain attacks and limits the counter-attacking opportunities they can create when they turn over possession — something that has been a hallmark of Liverpool’s attacking approach since Klopp took over. Consequently, opposition teams find it easier to maintain a solid defensive structure as Liverpool’s attacks are markedly less relentless.

Given all of this, many of Liverpool’s offensive woes can rightly be attributed to their injuries. While it’s sometimes appealing to ignore such seemingly simple explanations in the pursuit of a grander narrative, that doesn’t mean that leads to an accurate assessment of a team.

There is one significant non-injury related factor that’s worth considering, though: Trent Alexander Arnold’s dropoff in performance. He and Andrew Robertson have established themselves as the primary creators in Klopp’s team, but judging from the numbers, the former has not been producing at the same rate as last year.

He’s averaging half the expected assists per 90 he was last season, while also averaging fewer key passes and shot-creating actions per 90. Alexander-Arnold is also completing fewer switch passes, which are passes that travel at least 40 yards across the width of the pitch. These types of passes were one of the key ways Liverpool looked to stretch opposing defenses and create chances last season, so Alexander-Arnold’s lesser completion of these diagnols is exacerbating Liverpool’s offensive struggles.

Alexander-Arnold can be performing worse for a number of reasons. Fatigue, lack of confidence, a run of poor form, or something else entirely could be contributing to it. He’s also not the only Liverpool player who is not performing at the same level as last season. His centrality to and role in the Liverpool attack, though, is quite unique. As such, should Klopp be able to return Trent to his usual performance levels, he will go a long way in resolving their attacking deficiencies.

But what’s most striking about Liverpool’s recent scoring drop-off is that they are still — even with all the issues mentioned earlier — creating more than enough chances to score plenty of goals.

Against Newcastle, Southampton, Manchester United, and Burnley, Liverpool have missed 8 big chances and have had an xG of 7.1. That they’ve scored 0 goals is genuinely astounding. Data analyst Dan Kennett showed through a series of simulations that based on the shots they’ve taken, there was a less than 1% chance that Liverpool failed to score in their last four games.

In fact, it was more likely that they would have scored 10 goals in that time than 0 based on the shots they took. This suggests that Liverpool’s goal-scoring will soon return as it’s extremely unlikely that they will keep missing as many high-quality chances as they currently are.

They may not be creating an incredibly high volume of chances, in large part to issues we already discussed, but they are still attacking effectively enough to be scoring much more than they currently are.

From both the qualitative and quantitative perspective, Liverpool’s goal-scoring issues are likely temporary. Whether or not they will last long enough to rule them out of a title charge remains to be seen.