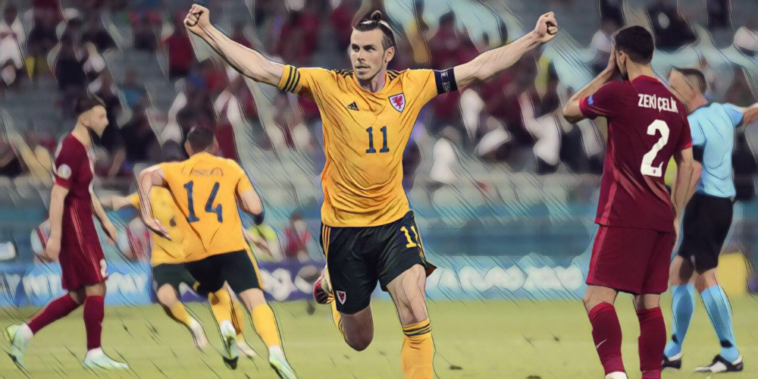 Much like they did in 2016, Wales have exceeded expectations in Euro 2020. They emerged second from a group featuring Italy, Turkey, and Switzerland despite having the least number of established players in the European top-flight among those sides.

They are yet to concede a goal from open play in the tournament and will feel that they have more than a puncher’s chance against Denmark in the first knockout round.

In their first two games against Switzerland and Turkey, Rob Page set Wales up as a 4-3-3 which at times became a 4-1-4-1, ditching the back five setup he had used prior to the tournament until the game against Italy, where he reinstated the 5-2-3. Both systems are predicated on a solid defensive shape that serves as the foundation for their attack.

When in a back four, Wales defend in a fairly passive 4-1-4-1 mid-block that only presses high up the pitch in certain situations. Usually, this press is triggered by left-winger Daniel James. The Manchester United attacker has the energy and work rate to quickly apply pressure to his opposite man when the ball is moved wide, and if the opposition then passes backward, the rest of the Wales frontline will push up to try and cut off passing lanes and force the team in possession to go long.

When the press isn’t engaged, the four players behind Kieffer Moore will instead shift across to whichever flank the opposition team is trying to play down to better compress the space they can play into and cut off available passing lanes.

As the ball moves deeper in their own half, Wales fall back into a 4-3-3 low block which is narrower, and try to block the middle of the pitch. Joe Rodon and Chris Mepham are both disciplined centre-backs who have the concentration and endurance to consistently make clearances and blocks in the penalty area.

Both are good in the air as well, meaning Wales can deal with crosses from deep relatively comfortably. Mepham and Rodon are also quite aggressive, and Page gives them license to push out of central defence and intercept as and when they see fit.

This was especially noticeable with Mepham against Turkey, who stepped out frequently to deal with Burak Yilmaz’s dropping off into Turkey’s left half-space. When this occurs, one of Joe Allen or Joe Morrell will drop from midfield into the space vacated by Mepham or Rodon, ensuring that Wales retain their back four.

Wales defend with the same general principles in the back five, using a similarly passive 5-2-3 mid-block and then falling into a 5-1-4 or 5-4-1 low block. The extra defender in the backline makes them more able to track runners from wide or from midfield. This is perhaps why Page went to this system against Italy, who play with significant fluidity and use midfielders such as Manuel Locatelli and Nicolo Barella as late-arriving goal-threats.

At times, though, Wales can find themselves defending too deep in the 5-4-1, ceding too much territory in front of the penalty area without having a clear outlet to relieve the pressure.

Wales’ attacking strategy varies more depending on their system. In the 5-2-3, the team morphs into a 3-4-3 in possession and tries to build patiently from the back. Rather than building through the middle, Wales will try to play through one flank before quickly switching it to the other and attacking the available space.

In the final third, they play without a recognised striker and instead field three of Harry Wilson, Ramsey, James, and Bale in a fluid attacking triumvirate. The goal of playing this fluid front three is to create overloads in between the lines to confuse defences and create space for quick passing combinations.

Against Italy, Aaron Ramsey served as the primary creator of this front three, dropping off to collect the ball and play in Gareth Bale and James in behind, although it is worth noting Bale and Ramsey can swap roles as provider and runner. It didn’t prove an especially effective ploy to create chances against the Azzurri, mainly because Wales had such little of the ball. Additionally, the lack of a traditional number nine meant the Dragons were without a player who could hold up the ball and relieve pressure from their backline.

In the 4-1-4-1, Kieffer Moore is brought in to play as a lone striker. The Cardiff City forward is a prototypical target man, whose aggression and aerial ability allow him to be serviced by crosses and long balls. Yet he is not by any means a limited player. His control and first touch are excellent, allowing him to link attacking moves as well as make long balls stick.

When Moore starts up front, Wales tend to go long to him rather than building out from the back. In the final third, much of their chance creation comes from finding James and Bale in wide areas and feeding Moore with crosses. Against Switzerland, this made the Dragons quite predictable and easy to defend against, especially when the fullbacks Ben Davies and Connor Roberts didn’t overlap.

Against Turkey, though, Page struck the right balance between attacking fluidity and retaining a focal point in the final third. Through his physical presence, Moore was able to occupy the Turkish centre-backs and drag them across the box through his movement. This created space in the box for Ramsey to exploit with his trademark late-arriving runs.

These runs were also facilitated by Bale’s unique role. Rather than holding the width or cutting inside to attack the penalty area as most modern wingers would, the Welsh captain dropped very deep to pick up the ball in the right half-space to do one of two things. The first was using direct switches of play to find James on the other flank, who was able to get into several one-on-one situations that resulted in crosses, fouls, or winning corners.

The second was playing lofted through-balls for Joe Allen or, more regularly, Ramsey from midfield. It was this type of pass that led to the Juventus midfielder’s goal against Turkey. Bale’s superb technique and vision make him a reliable creator from these deeper areas, and they make Wales a more varied and potent attacking force.

A piece of absolute brilliance from Bale and Ramsey!

The last key thing to mention about the Welsh attack is their threat from set-pieces. Two of the three goals they scored in the group came from corners, with their combination of aerially dominant players and effective routines proving useful as a mode for chance creation.

Wales also have four players with six of more fouls, more than any other nation in Euro 2020, so they will consistently be able to exploit these opportunities even against better opposition. It’s a testament to Rob Page that he’s clearly worked on this aspect of Wales’ play to make them a more effective side.

Wales are not without their issues. As mentioned earlier, they are sometimes either too reliant on Moore as a focal point or entirely absent of one in attack. Their deep, defensive system can also make it difficult to create opportunities from open play. On the occasions they do, Moore and Ramsey in particular are prone to missing opportunities through poor finishing, and so Wales may find it increasingly difficult to score as the tournament progresses.

But with an extremely well-drilled defensive unit, individual attacking players of supreme quality, and a coach willing to adapt his tactics when required, Wales are a formidable side in this tournament. While it’s unlikely that they will repeat their sensational semi-final run from Euro 2016, Wales are and may continue to be a surprise package in Euro 2020.