Manchester United’s loss to West Ham in the opening round of the Carabao Cup followed a familiar script. A well-drilled, deep sitting, defensive block forcing United into having possession for the majority of the game and punishing them on the counter-attack whenever possible.

Its a formula that’s led to too many losses under Ole Gunnar Solskjaer’s watch, the names: Everton, Crystal Palace, Newcastle, Sheffield United, and Villareal in the Europa League final are just a smattering. Each one elicits the same question: is Solskjaer really the right man for United?

Posing that doubt doesn’t discredit all the good he has done for Manchester United. He’s overseen improvements in the club’s recruitment, academy, and scouting facilities as well as rehabilitating individual players such as Harry Maguire and Luke Shaw and the collective dynamic of the squad.

But to win Premier League and Champions League titles — which has to be United’s aim given their spending during the past few windows — that may not be enough. Solskjaer needs to give the team a clearer attacking structure, automatisms and methods with which they can unsettle deep-sitting defenses. The evidence from his two full seasons in charge does little to inspire confidence.

The below table shows data from Manchester United’s Premier League games in which they had 60% possession or more during Solskjaer’s two full seasons in charge (excluding the 9-0 win against Southampton since it’s an outlier).

Four losses from seven games with more than 70% possession is an abysmal return for a team of United’s quality and reflects the exact issues they have when they’re unable to rely on transitional attacks to create chances.

They conceded almost double the number of goals one would expect from the quality of chances they gave up (shown by their xGA), but from an attacking sense, they performed just as well as the expected goals suggest.

Their performance in games with 60-69% possession is significantly better from both an attacking and defensive perspective. That makes sense to an extent: it may be that they only have 70% possession when opposition teams are extremely effective defensively and force United to circulate the ball aimlessly, and in other games, United are better able to use possession effectively to create chances. Yet that doesn’t tell the full story.

The below tables use the same data but breaks it up into before and after Bruno Fernandes’ arrival at Old Trafford.

Unsurprisingly, we see a significant improvement in results and underlying numbers after the Portuguese’s integration into the team. However, what we see is that the number of goals United score per game is significantly more than their xG.

That suggests that United’s results have improved in games with a vast majority of possession, they’ve outperformed their xG by an even higher degree than before. That isn’t entirely negative: it shows United’s players are consistently good enough to outperform their xG. In Fernandes specifically, they found a player capable of directing almost all phases of the attack single-handedly, compensating for their lack of structure.

However, it does show that rather than improving clearly in their attacking methods, United have simply improved their playing squad to the point where they can convert more low-quality chances. One can see this when analyzing the types of goals Manchester United score when they have a vast majority of possession. 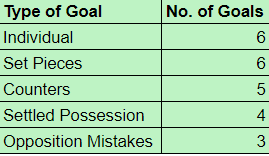 This is a breakdown of the 24 goals United scored in games with 60% or more. Opposition mistakes included miscued clearances, spilled goalkeeper claims, and heavy deflections while set pieces included penalties, corners, and free kicks.

The “individual” goals include three shots from outside the box, two volleys, and Rashford’s goal in a 3-1 win over Newcastle where he drove with the ball from just ahead of the halfway line to score by himself. Goals in the “other” category came from settled position from one deep cross, two driven crosses, and one neatly worked one-two that lead to Aaron Wan-Bissaka’s first and only Man United goal to date against Newcastle in 4-1.

Through these goals, it’s difficult to assess any clear patterns or strengths which United routinely fall back on other than counter-attacks, which by virtue of their possession in these fixtures, cannot be relied upon consistently. Most title-winning teams, from Pep Guardiola’s City to Antonio Conte’s Inter have specific rotations or passing sequences to create space in congested defenses.

There is no one way to get to that point — anyone can tell you that Conte and Guardiola have very different tactical systems — but some type of structure needs to be achieved. Manchester United simply don’t have that to the extent that truly elite teams do.

It’s arguable that, by further improving the squad this summer and by hiring Eric Ramsay as a set-piece coach, United can make enough incremental gains in their attacking play to score enough goals against low blocks. The return of Diogo Dalot could also aide United in having more offensive thrust from right-back.

But that’s a gamble, and with the caliber of squad United have, that shouldn’t be their predicament. The club are entrusting their best squad of the post-Ferguson era with a coach who has failed to show he has the necessary tactical acumen to elevate the team from a good, top-four team to a title-winning squad.

Solskjaer’s tenure as Manchester United manager hasn’t been without its positives, but into his third-full season in charge, their attacking play remains too reliant on individual players.