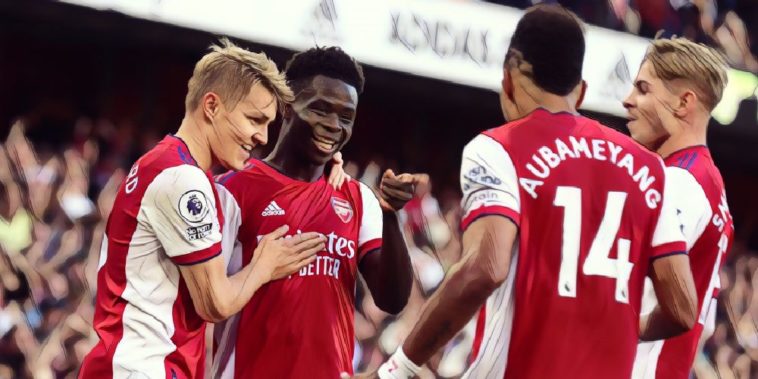 Arsenal put in an impressive first-half display as they ran out 3-1 winners in the north London derby, with Bukayo Saka and Emile Smith Rowe taking starring roles.

The two sides came into the game in totally contrasting veins of form, Spurs winning their opening three games without conceding while Arsenal lost theirs without scoring. Since then though, the tides have to totally turned, with the Gunners winning their last two outings 1-0, while their rivals had suffered back-to-back 3-0 losses in London derbies.

It would be the side in red who started by far the brighter of the two, dominating possession and looking far more composed on the ball, and they would make their early domination count after just 12 minutes. Martin Odegaard drove the ball forward and fed it into Bukayo Saka down the right, the England international taking on his man before finding fellow academy graduate Emile Smith Rowe unmarked 12 yards from goal, who kept his first-time effort down to beat Hugo Lloris.

Arsenal were dominant and they doubled their advantage just before the half-hour mark through a scintillating counter-attack – playing out of the back before Kieran Tierney fed the ball up to Pierre-Emerick Aubameyang who held off his man and flicked the ball into the path of Smith Rowe. The Arsenal number 10 raced away down the left, before looking up and cutting the ball back into the path of Aubameyang who fired home smartly with his left to register his second goal of the season.

Seven minutes later and it was three, the Gunners again countering after dispossessing Harry Kane in their defensive third, before Smith Rowe picked out a pass to find Saka in acres of space down the right. The 20-year-old drove towards the box, and just as it looked as though he had run into traffic, Kane’s attempted challenge saw the ball fall kindly back to him, the youngster making no mistake as he fired low to Lloris’ right to send the Emirates into dreamland and some Spurs fans to the exits.

Spurs saw a little more of the ball in the early passages of the second half, but rarely looked like actually posing a threat to their nearest rivals as Arsenal kept them at arms distance.

They would pull a goal back with 11 minutes remaining, Heung Min Son meeting a low Sergio Reguilon cross from the left, ‘keeper Aaron Ramsdale getting a hand to the South Korean’s effort but being unable to keep it out.

2020 – Arsenal will end today above Tottenham Hotspur in the Premier League table for the first time since October 25th 2020. Superiority. pic.twitter.com/Lw5tYv6epQ

They were, however, unable to build up any kind of momentum in those final minutes with a 20 yard effort from Lucas Moura that was tipped over by Ramsdale the closest they came to closing adding a second.

Speaking after the game, Mikel Arteta dedicated the win to the fans after their start to the season had seen them bottom of the league after three games.

“This win is for the fans. They were there when we needed their support,” he told Sky Sports.

“We started really strongly and were determined. In the second half we had to do what we had to do.”

Asked what he liked the most about the performance, the Spaniard said: “The determination, the conviction and connection with our people.

“We just need to keep everyone healthy because we are going to need everyone. It was the exact mix we needed with the senior players and then the youth.

“It’s a special day. Today is one example of what we want to do. But we have to be consistent.”