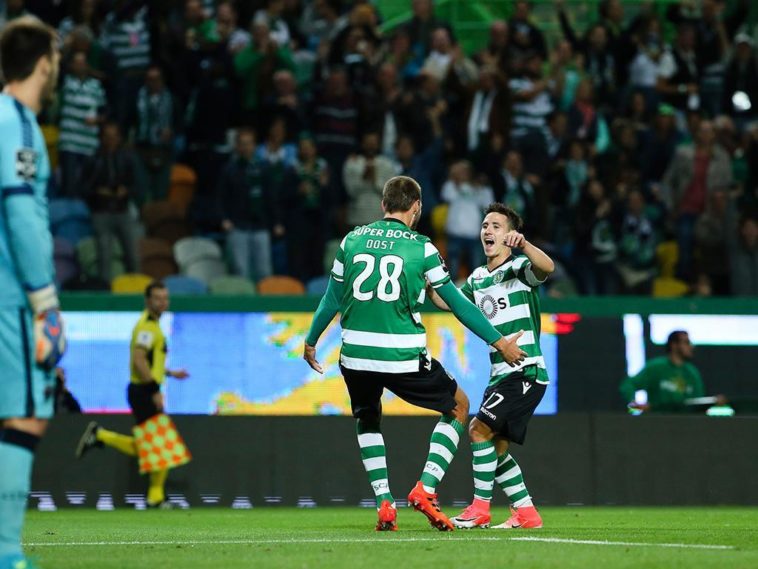 Sporting returned to their winning ways in the best way possible after thrashing Chaves at home. The Lisbon club, after a last-minute loss against Juventus, needed a powerful motivator to keep going and it was excellently delivered.

As the match started, Sporting immediately looked to take control of the game and it proved efficent as they instantly found the back of the net.

Dost finally found the back of net after a six game goal drought.

A corner awarded to Sporting saw Bruno Fernandes cross the ball towards the near post. Dost zoomed forward and brilliantly finished it off with a powerful header into the bottom right corner of the goal. The striker finally managed to score after a 6-game goal drought.

It wasn’t long after that the Lions struck again.

From the half-way line, Piccini conjured up a long through pass towards Podence, who sped up the right wing. With the ball in midair, he sent it skyrocketing towards Bas Dost who, once again, launched forward to head it in.

Chaves looked to get back in the game and for the next 15 minutes, the match was played evenly between both sides. Each team was rewarded with a goal chance during that time, although both failed. With Perdigão sending the ball way over the crossbar, and then Acuña rocketing it just past the left post, the scoreline remained intact.

In the 38th an enormous goal opportunity was wasted by Sporting. Podence, who was holding up the ball, suddenly turned and scooped it over the defenders right on the edge of the box. The keeper charged forward but so did Dost, who arrived first to tap it over Ricardo. Miraculously the ball, instead of finding itself in the back of the net, grazed past the right post to go out.

It wasn’t even a minute later though when they actually managed to score. Dost received the ball and quickly sent it straight past the defenders to be caught by Gelson Martins. It was him and Acuña versus the keeper, and the Portuguese unselfishly handed it to his teammate who just had to tap it in to make it 3-0.

Chaves seemed lost in the game but just before halftime, they attempted a frighteningly close chance at scoring.

Djavan entered the opposing penalty area and after whizzing past the remaining defenders, he let off a well-placed shot towards the bottom left corner, saved nicely by Rui Patrício.

The first half ended and Sporting were dominating a comfortable home win, while Chaves hoped to get the best result they could at that moment.

Surprisingly the first dangerous shot came from the losing side when Platiny raced past the defence and the keeper before Patrício got up and just managed to block the player’s shot.

The home team answered back swiftly, and Acuña equalled Dost’s goal tally. Piccini stole the ball from an opposing throw-in and then quickly dribbled his way towards the penalty are before passing to Dost. The Dutchman rolled it slowly towards Acuña who charged forward and firing an excellently stuck shot from the outside of the box, resulting in an excellent goal.

The Verdes e Brancos showed no mercy and finished Chaves off with their fifth and final goal. Gelson Martins darted forward with the ball all the way up the pitch before leaving it to Piccini. The Italian rushed forward on the right wing and, just before it went out, scooped the ball magnificently to cross it towards the far post. Bas Dost shone once more, pushing the ball into the back of the net and, therefore, completing a headed hat-trick.

A few minutes later, Bruno Fernandes appeared, receiving the ball from an incomplete clearance, before winding up a powerful shot from outside the area which just went over the crossbar.

Despite everything, Chaves achieved a motivating, yet insignificant, last-minute goal. Davidson received the ball coming into the box and after dribbling efficiently past two defenders, proceeded to chip it delicately over the keeper. A great goal that, unfortunately for the player, did nothing more than to annoy the home team.

The referee finally blew to end the match and Sporting felt proud of their massive win, while Chaves hoped to move on and continue to try and achieve good results in the future.

As all podium-placed teams won this weekend, the league table remains the same. Porto leads by two points, while Sporting remains three points of rival Benfica in second place.