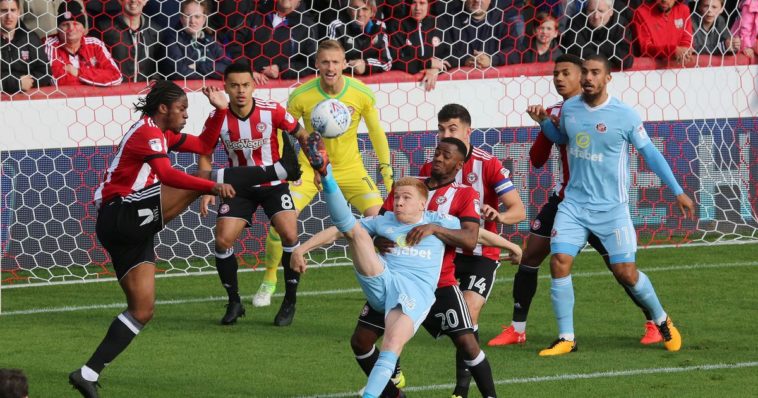 It was a an entertaining 3-3 draw at Griffin Park on Saturday as Dean Smith’s Brentford hosted Simon Grayson’s struggling Sunderland.

Grayson made a few changes to the side held by QPR last weekeend; including Laminé Koné returning from injury, replacing tge injured Ty Browning. Billy Jones started at his preferred position of right back over Welshman Adam Matthews. Lewis Grabban started as the lone striker over the out of form James Vaughan. Lasse Vibe lead the line for the Bees with Sergi Canos on the bench.

It was the home side that took the lead when Brentford rattled the post. Winger Florian Jozefoon managed to knock the ball into the path of the arriving Yennaris who tapped into the empty net eight minutes in.

Sunderland looked dangerous going forward and a clearance found on loan Bournemouth striker Lewis Grabban. The Sunderland man outpaced two of the Brentford defence and the as cool as you like curled it past Daniel Bentley to make it all square.

Very few chances arose between Sunderland equalising and taking the lead. Jason Steele had the away support on edge with some shaky goalkeeping and failing to hold onto simple shots. Sunderland took the lead eventually, a few good corner deliveries from Aiden McGeady and Bryan Oviedo lead to the visitors going in front. Oviedo’s corner was too close to goalkeeper Daniel Bentley who caught it but couldn’t hold on and dropped it into his own net, giving Sunderland fans something to cheer about.

Then in injury time Watmore broke away on the counter and was pulled back by Henrik Dalsgaard in the area and the referee Darren England pointed to the spot. Lewis Grabban stepped up, hoping for his brace. Grabban converted from 12 yards on the opening day of the season at home to Derby. Grabban made no mistake and sent Bentley the wrong way, putting it top left, getting his brace.

With the Black Cats firmly in front, it would’ve been clever to keep hold of the ball and dictate play and possession. Instead, just two minutes into the second period, Didier Ndong made a needless tackle on the edge of the area and gave away a free kick in a dangerous position. Florian Jozefoon struck the free kick into the top right past the poorly positioned Steele at the keeper’s side.Brentford were in the ascendancy and looked like they could attack all day. An equaliser was definitely coming as the Bees looked confident and far too good for a tired Sunderland defence. Billy Jones failed to stop crosses and Oviedo was far more interested in attacking, whilst O’Shea looked like he could barely keep going with the constant flurry of chances. Koné still looked uninterested and looks like he’s only playing to put himself in the shop window.

The home side were eventually rewarded for their dominance when Jozefoon caused even more problems at the back for Sunderland. His darting run from the right wing into the centre was completely unchallenged and was then allowed a free shot from the edge of the area. The Dutchman’s effort deflected off substitute striker Neal Maupay’s foot and wrong footed Steele.

Apart from a few half chances for Sunderland the visitors never looked a threat second half. Aiden McGeady hit a shot at the near post when he should’ve really went across. Vaughan headed wide but nothing dangerous arose for the Brentford defence.

If it was anyone who was going to win it was the confident looking home side. The bees had a few more half chances which Steele nearly fumbled; his speed of distribution allowed Brentford to get back and stopped the counter as well as slowing down the play, something Sunderland could’ve done without.

On the back foot

Ultimately, Simon Grayson’s tactics cost the game. Lewis Grabban was clearly tired by the hour mark but stayed on the field until 84 minutes when James Vaughan replaced him. Watmore was still clearly not 100% fit, yet he was kept on longer than he should’ve been. Again Honeyman was running around like a headless chicken but somehow managed a full game, McGeady also looked tired by the end when he was replaced by Lynden Gooch. However, it was too little too late for the substitutes. If they were to make an impact thet needed to be on earlier. Poor decision making cost the visitors three points. In my opinion, fans have got to lay the blame at Grayson’s door, 3-1 up and then draw the game is poor tactically and considering Sunderland nearly ended up losing is pretty poor. The Black Cats managed to just cling onto a draw and Brentford could’ve easily took all three points.