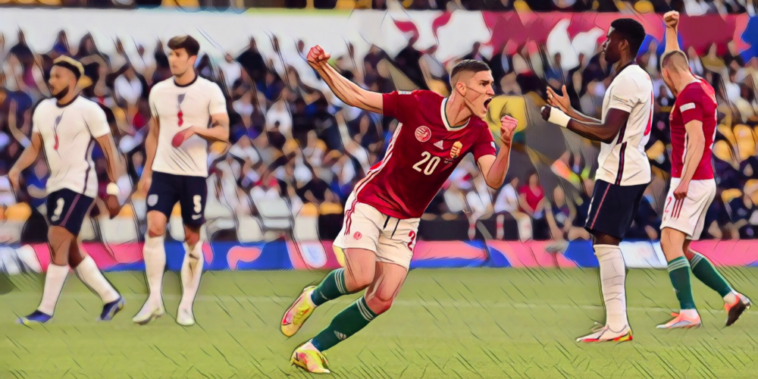 Gareth Southgate has reacted to a ‘chastening’ night for England after the Three Lions’ miserable UEFA Nations League campaign continued with a 4-0 defeat to Hungary at Molineux.

England fell to their heaviest home defeat since 1928 after a punishing performance from Hungary, with the loss extending the winless run of Southgate’s side to four games in the Nations League.

The Three Lions’ have failed to score from open play in each of their last four games in a worrying build-up to the World Cup in November and Southgate has admitted the emphatic loss to the Hungarians was a ‘very painful’ experience for his side.

“It’s a chastening night,” Southgate said. “We’ve not lost many matches and when you lose so heavily with England it’s going to be very, very painful.

“I feel for [the players] because, in the two Hungary games in particular, I picked teams where I tried to balance the squad, give young players opportunities, and I didn’t get the balance right for then to perform at the level they needed to win those matches.”

Southgate shouldered some of the blame for the loss after making nine changes from the team that drew with Italy at the weekend, with only Reece James and Aaron Ramsdale retaining their places from the goalless draw with the European champions.

“The players have been fantastic,” the Three Lions boss said. “The responsibility lies with me. It was very difficult to put the strongest team out in every game so we used it to prepare for Qatar. But of course a night like tonight is very difficult and it’s important to take that off their shoulders because it’s totally down to me.”

England’s performance earned criticism and jeers from the home crowd with chants of “You don’t know what you’re doing” directed towards Southgate.

The Three Lions boss admits he will have to deal with the ‘flak’ that comes his way but insists that each of his predecessors have endured difficult moments in the role.

“I’ve got to accept that the next period will be unpleasant and uncomfortable, but you’re never going to have six years like we’ve had and not have difficult nights,” he said.

“I knew the role before I took it. I would say [the change in tone] has happened over 10 days, not 11 months, but I saw all my predecessors go through that and I know great people like Sir Bobby Robson, what he had to go through and how he was viewed in the end on getting the team to a World Cup semi-final.

“Football is emotional, people pay to come and watch, will give an opinion. The team weren’t able to deliver tonight, that’s my responsibility so if the flak comes my way I have to deal with that.”