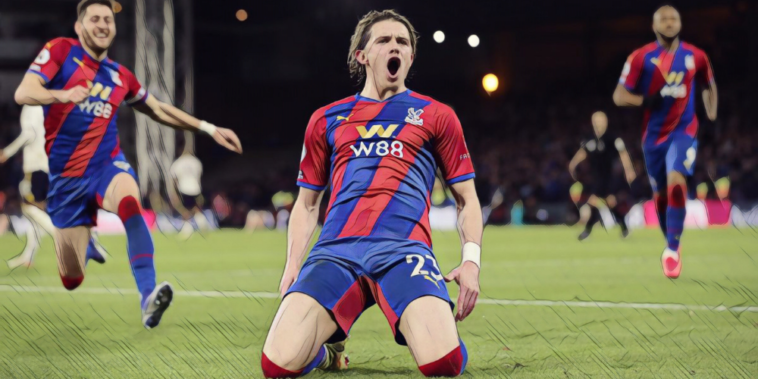 Conor Gallagher is a man in demand after a breakthrough season in the Premier League, with the Chelsea midfielder having excelled during a season-long loan at Crystal Palace.

Gallagher was nominated for the PFA Young Player of the Year award after an impressive campaign at Selhurst Park, in which he was named as the Eagles’ Player of the Season and broke into the senior England team.

Competition for midfield places remains fierce at Chelsea and he will be hoping to break into Thomas Tuchel’s plans in pre-season, though there is a whole host of Premier League rivals waiting in the wings should he fail to do so.

Predicting where a talented Premier League player will end up at the end of a transfer window is a lottery for which you’ll need to best Lotto Agent. So with that in mind, here are the five favourites to sign Conor Gallagher from Chelsea.

Newcastle are expected to invest once agin this summer after a January splurge on new additions, with Eddie Howe keen to build on a positive start to his reign at St James’ Park.

The club’s fine end-of-season form and new billionaire ownership have raised optimism in the North East and plans are underway to strengthen and improve ahead of the 2022/23 campaign.

Gallagher could be viewed as a long-term part of the club’s plans moving forward and would add even greater dynamism to a midfield already containing Bruno Guimarães and Joelinton.

Priorities appear elsewhere at present with a centre-back and centre-forward on Howe’s agenda, but Newcastle are a side with the resources and project to convince Gallagher should he seek a Chelsea exit.

Fulham are hoping to make a better bid at Premier League survival this season as the Cottagers look to continue the momentum of their Championship title and end a recent yo-yo existence between the divisions.

Marco Silva is set to receive significant backing with ambitious moves for Bernd Leno and Manor Solomon rumoured in recent weeks and a deal for Gallagher would be another show of intent from Fulham.

A move to Craven Cottage would allow the midfielder to remain in west London, whilst Gallagher’s arrival would address a need in Silva’s side.

Fabio Carvalho’s move to Liverpool has reduced Fulham’s creativity and goal threat from midfield with the teenager having scored 10 goals and provided eight assists in the Championship last season.

West Ham could be in the market for midfield additions this summer, with Mark Noble having called time on his one-club career with the Hammers and Alex Kral having failed to impress during a loan spell form Spartak Moscow.

Gallagher appears an ideal compliment to Tomas Soucek and Declan Rice in the West Ham engine room, with each possessing energy and drive in abundance.

Is this the best of Conor Gallagher's 8️⃣ #PL goals this season? 💥#GoalOfTheDay | @CPFC pic.twitter.com/UDbZJRlMzf

A move to the London Stadium would also allow Gallagher to remain in the capital and play European football, after David Moyes’ side secured Europa Conference League qualification for 2022/23.

Frank Lampard is understood to be an admirer of Gallagher’s talents and has been linked with a raid on his former side for the Chelsea midfielder.

Gallagher has earned stylistic comparisons to Lampard for his ability to ghost forward and score goals, having netted eight times in the Premier League during a successful season at Selhurst Park.

Lampard will be looking to overhaul an Everton team who performed below expectations to find themselves in a relegation dogfight last season, with midfield a particular focus following the disappointing January arrivals of Donny van de Beek and Dele Alli.

Tottenham are rumoured to be interested in signing Richarlison this summer and the sale of the Brazilian could free up vital funds for Lampard’s rebuild at Goodison Park.

Crystal Palace are the favourites to sign Gallagher from Chelsea, following the success of his stint with the Eagles last season.

Patrick Vieira has made no secret of his desire to bring the 22-year-old back to the club, admitting his ‘love’ for the midfielder following Palace’s 1-0 win over Manchester United on the final day of the season.

Speaking at his post-match press conference, Vieira said: “Yes I think the fans love him. I love him. The players in the dressing room respect and love him.

“Now we wish him good luck and we wait and see what will happen. But we may have a player in the squad already who can replace him.

“It’s been unreal – I’ve loved every minute of it,” he said on the Selhurst Park pitch, as per football.london, after the win over United.

“Of course, there’s been ups and downs, but I’ve developed a lot as a player and as a person. I can’t thank the Palace fans enough and obviously the players at Palace. It’s just been brilliant and I’ve just felt at home since the very first day.

“I’m speechless just because I’ve loved it so much,” he added. “It’s just going to be a great memory and I’m so happy that I was able to play for Palace this season, I’ve just loved it.”