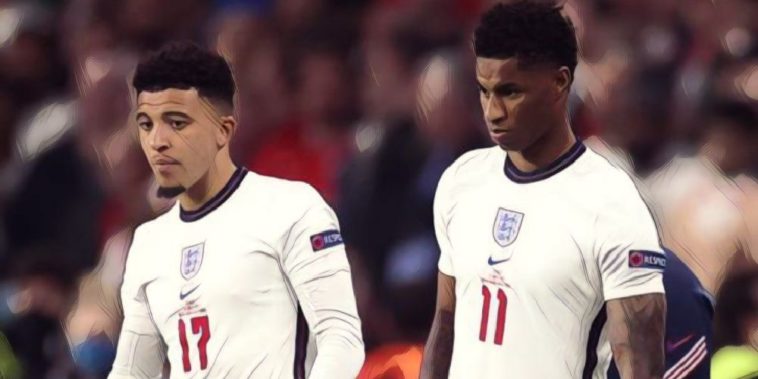 Ole Gunnar Solskjaer has vowed to protect his star duo of Jadon Sancho and Marcus Rashford, following recent chants by Manchester City and Leeds fans regarding the two players.

The return of capacity crowds has largely been a huge positive for football as a whole after almost 18 months of behind-closed-doors fixtures, although that’s not prevented some of the returning support from slipping into old habits.

Following England’s Euro 2020 final defeat to Italy on penalties, the three members of Gareth Southgate’s squad to miss their spot-kicks in the shootout – Sancho, Rashford and Arsenal’s Bukayo Saka – were subjected to vile racist abuse on social media.

While there has rightly been a large swell of support for those three individuals since, the return of supporters has seen them come under fire once again, with Leeds and City fans being filmed singing ‘Sancho and Rashford let the country down.’

Despite those chants in the early weeks of the season, Manchester United boss Solskjaer believes that it won’t be a common occurrence throughout the campaign, with most recognising the trio’s bravery in stepping up to take a penalty.

“I don’t expect that to happen with too many away fans, or other fans,” Solskjær said at his pre-match press conference. “More of them are more respectful and support their country more. You see other clubs’ fans show their support to the players who’ve been brave enough to step up for their country.”

The Norwegian was likely referencing the Brentford reaction towards Saka during the Bees’ clash with Arsenal last weekend, the teenager handed a standing ovation as he entered the fray as a substitute, having also received a similar reception in a pre-season friendly with rivals Tottenham.

Solskjaer also has experience with a teammate suffering an intense backlash due to a major tournament display for England, having been part of the United squad when David Beckham became public enemy number one following his red card and England’s subsequent elimination against Argentina at the World Cup in 1998.

Having seen his former boss Sir Alex Ferguson deal with that situation, the 48-year-old has insisted he will act in a similar manner and ‘protect’ his two ‘strong’ young stars.

“The way the manager dealt with the Becks situation was just the right prototype,” he said. “Jadon and Marcus are strong characters; that won’t be an issue. We will protect them; I will protect them.”

“It’s not just because you’ve done something wrong, it’s also because they’re afraid of you,” he added. “That’s probably the case with Becks. He dealt with it in his own way: ‘I’ll show you, I will show character, I’ll prove how good I am.’

He went on to praise both Sancho and Rashford for actually having the courage to step up to take a penalty, despite the eventual outcome.

“The old Theodore Roosevelt ‘man in the arena’ [speech] resonates for me in this situation,” Solskjaer added.

The former US president’s notable speech of 1910 talks up those who are willing to put themselves in the ‘arena’ or the spotlight, even though there is a chance of failure.

“The credit belongs to the man who is actually in the arena, whose face is marred by dust and sweat and blood; who strives valiantly; and who at the worst, if he fails, at least fails while daring greatly.”

While Rashford is currently sidelined until October following successful shoulder surgery, summer signing Sancho could make his first start for the club against Southampton on Sunday.