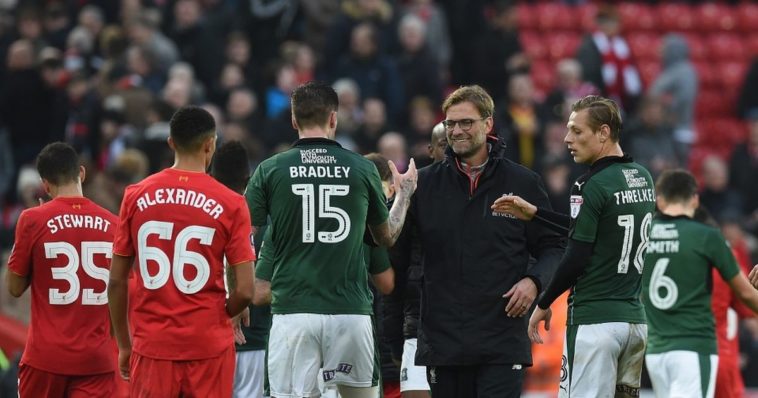 Liverpool travel to Plymouth this week for the FA Cup Replay at Home Park, which they could quite honestly have done without as Klopp`s team have had a busy schedule recently.

Klopp made a lot of changes for the home tie with Plymouth and fielded a side with Liverpool`s youngest team ever, where the average age was 21 years 296 days.

The 0-0 draw frustrated the majority of fans and there have been many debates about the team selection that day, why we played so many new faces and why even with the team that played couldn’t we beat League 2 Plymouth.

I can see both sides to this and absolutely yes we should have beaten Plymouth with any team selected, and we also had home advantage, but Plymouth came to Anfield with a job to do and they did it as they got exactly what they wanted – a replay at their place and a nice financial cash boost, which may turn out to be priceless if they manage to get promotion at the end of this season with the help maybe of a new player or two later this month. Who could blame them, and I think we would all do the same in their position.

Liverpool`s pressing game couldn’t be utilised against Plymouth as for this tactic to be successful you need the opposing team to be pushing forward and wanting the ball themselves. Whereas Plymouth quite clearly didn’t want the ball and allowed Liverpool to have so much possession,  and it turned out to be like a training passing session in the first half in particular.

Although Liverpool fielded a young side we need to remember that the line up also included some first team regulars, Can, Moreno, Origi and Lucas, plus Sturridge, Lallana and Firmino also made appearances from the substitute’s bench, so quite a lot of experience on the field. Perhaps Plymouth should be given a lot more credit for the tactics on the day, rather than debates on why we played such a young team?

Apart from staying in the competition there is no real measure on how successful a tactic to play so many young players in the one game, but who knows in the future one of these players could be a first team regular and a world beater, here`s hoping to that.

Since the draw at Anfield, Liverpool have lost away at Southampton in the first leg of the EFL Cup semi-final, they lost 1-0 but it could so easily have been more, and a 1-1 draw at Old Trafford on Sunday which was a hard fought game.

As to the team Klopp selects for Wednesday`s replay with Plymouth, who knows, but he may rest a few regulars with Swansea in mind next Saturday, but I`ve a feeling that Henderson and Coutinho will play as they have been well missed recently and we can get through to the next round with another home tie against Wolverhampton Wanderers.

Plymouth may play the same way again try to frustrate Liverpool and rely themselves on a breakaway or a penalty and if Moreno starts again a penalty is a distinct possibility.