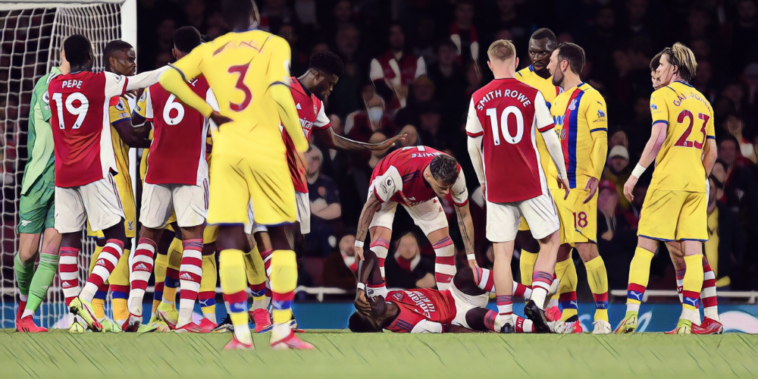 Arsenal have been handed a boost after Bukayo Saka was cleared to feature against Aston Villa, after limping off during Monday’s 2-2 draw with Crystal Palace.

Saka was on the receiving end of a wild hack from James McCarthur during the draw at the Emirates, with the England international unable to continue after the half-time interval.

McCarthur’s challenge was greeted with widespread criticism with the 34-year-old fortunate not to receive a red card, referee Mike Dean brandishing only a yellow card despite consultation with VAR.

Arsenal had feared that Saka faced an extended spell on the sidelines, but the Sun are reporting that the 20-year-old has now been cleared to return to training and is available for tomorrow evening’s clash against Aston Villa.

The north London side dropped to 12th in the division following the draw with Crystal Palace, a fixture which saw Alexandre Lacazette’s stoppage-time goal rescue a point for the Gunners.

Mikel Arteta will be hoping for an improved showing from his side at The Emirates, as Arsenal look to stretch their unbeaten Premier League run to six fixtures.