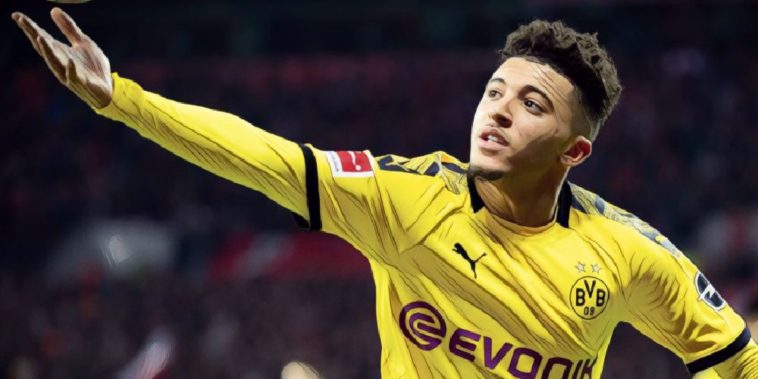 Cole Palmer made headlines after coming off the bench to score in Manchester City’s 5-1 thrashing of Club Brugge on Tuesday, the talented teenager netting his first Champions League goal for the club.

Palmer’s goal comes just weeks after netting his first senior goal for City in the Carabao Cup and hopes are high that the 19-year-old academy graduate can continue his rise under Pep Guardiola.

The midfielder joins an exclusive group of English teenagers to have scored in the competition and following his effort we’ve looked at the six youngest English players to score a Champions League goal.

Jack Wilshere came through the academy system at Arsenal and was hailed as the future of both club and country, a gifted technical midfielder with the ability to make an immediate impact whilst still in his teenage years.

Wilshere became the youngest league debutant in the history of the North London side and swiftly established himself in the first-team, scoring his first Champions League goal during a rout of Shakhtar Donetsk in 2010.

Arsenal ran riot in a convincing group stage victory over their Ukrainian visitors at the Emirates, an 18-year-old Wilshere netting their fourth in a 5-1 victory with a clipped finish.

It was a highlight in a career-best season that saw the midfielder named as the PFA Young Player of the Year, injuries since sadly decimating much of his career and robbing Wilshere of that initial youthful spark.

Phil Foden is the fourth youngest English player to score a Champions League goal, netting his first goal in the competition during Manchester City’s victory over Schalke in March 2019.

Pep Guardiola’s side headed into the second leg of their last-16 tie in possession of a 3-2 lead from the first clash in Germany, but there was nothing close about the scoreline in the return as they cruised into the last eight.

City scored seven times without reply on a humiliating evening for Schalke in Manchester, Foden netting the host’s sixth with his first goal in continental competition.

The Stockport-born teenager collected a pass from the irresistible Leroy Sane before confidently rounding the goalkeeper and slotting home, becoming the youngest ever English goalscorer in a knockout stage tie.

The teenager started upfront alongside Emmanuel Adebayor and scored twice as the Gunners closed in on a place in the knockout stages with a 7-0 victory at the Emirates, equalling the record for biggest winning margin in a Champions League fixture at that time.

Walcott’s goals were just his second and third in an Arsenal shirt since signing from Southampton, helping seal a 12th successive win for the North London outfit – equalling their best ever run under the management of Wenger.

Jadon Sancho left Manchester City for Borussia Dortmund in search of regular first-team football in 2017, the winger convinced he was ready to play at the highest level.

After being given a handful of appearances in his debut season he burst into life during the 2018/19 campaign, including scoring his first Champions League goal during a 4-0 thrashing of Atletico Madrid.

Sancho came off the bench to tap home from Achraf Hakimi’s cross following a lightning counter-attack from Dortmund, who inflicted the heaviest loss of Diego Simeone’s Atletico reign.

Sancho’s goal was the first of five he has scored in the Champions League to date and the winger will hope to increase that total after a summer move to Manchester United.

Alex Oxlade-Chamberlain is England’s second-youngest Champions League goalscorer, after finding the net for Arsenal against Olympiakos just a little more than a month after his 18th birthday.

Oxlade-Chamberlain signed for the North London side from Southampton in 2011 and quickly made an impression at the Emirates, scoring on his Champions League debut in a 2-1 victory against the Greek side in September.

The midfielder spent a further six seasons at Arsenal before moving to Liverpool, forming part of the squad which reached successive Champions League finals in 2018 and 2019.

The latter of those saw the Reds crowned champions of Europe for a sixth time after defeating Tottenham in only the second all-English final, making Oxlade-Chamberlain the only player in this feature with a winners’ medal.

Jude Bellingham followed in the footsteps of Jadon Sancho after swapping England for the Bundesliga, the midfielder signing for Borussia Dortmund after an impressive emergence at Championship side Birmingham City.

Any suggestions that the teenager would take time to handle the step up were soon removed following a thrilling debut season at the Westfalenstadion, being named as the Bundesliga’s Newcomer of the Season after making 46 appearances in all competitions for Dortmund.

Bellingham’s performances also saw him break into the senior England squad, becoming the Three Lions’ third-youngest debutant of all-time behind only Theo Walcott and Wayne Rooney, before being named in Gareth Southgate’s squad for Euro 2020.

What a finish from Jude Bellingham! 🎯

That's his first #UCL goal and it's so composed for a 17-year-old… 📈 pic.twitter.com/vMoYMmWcXJ

He netted his first Champions League goal – becoming the youngest ever English goalscorer in the competition – during a quarter-final clash against Manchester City last season, opening the scoring in the second leg with a fine finish.

Bellingham also became the second-youngest player to score in a UEFA Champions League knockout game, after Bojan for Barcelona against Schalke in April 2008.