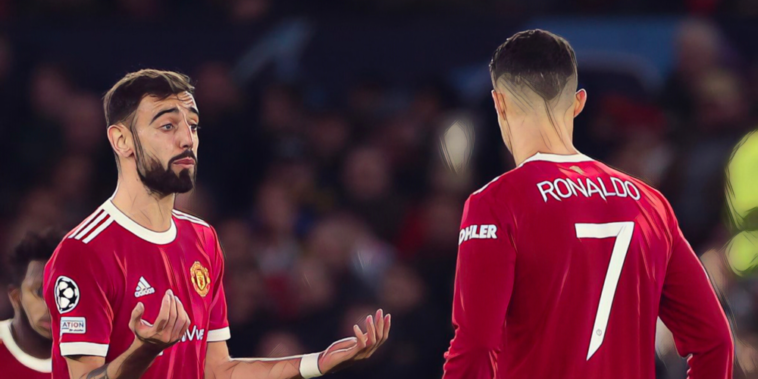 Champions League matchwinner Cristiano Ronaldo is said to have blasted his Manchester United teammates at half-time in the win over Atalanta, while Bruno Fernandes also urged Ole Gunnar Solskjaer to change tactics prior to the midweek turnaround.

United went into Wednesday’s game in desperate need of both a positive result and a positive performance, having already slipped up in the group stage against Young Boys and been dismantled by Leicester City in the Premier League at the weekend.

Some shaky defending looked to set pile even more misery on Solskjaer’s men as they went into the break 2-0 down, before a stirring second-half comeback saw them run our narrow winners, as goals from Marcus Rashford, Harry Maguire and a late Ronaldo header claimed a pivotal victory in their bid to reach the knockout stages.

United’s first half performance saw them booed off the pitch at the interval, with the Sun reporting that the Portuguese duo of Ronaldo and Fernandes both played their part in sparking an improved second-half display.

The report claims that five-time Champions League winner Ronaldo ‘blasted’ his Manchester United teammates as he questioned whether they were ‘ashamed’ by their first-half showing, while he also stressed the importance of securing the win to help get out of the group stage.

The 36-year-old has himself had come under scrutiny after failing to really make an impact in recent games, yet he looked much brighter against Gian Piero Gasperini’s side and made a notable intervention to clinch a late winner with an expertly taken header.

His international colleague Fernandes is also claimed to have told Solskjaer that he needed to drop deeper in order to get on the ball more, with the former Sporting man going on to lay on the assists for both Rashford and Maguire to help get the Red Devils back into the game.

The playmaker had been far from his best in the first-half, having squandered possession far too often – registering a passing accuracy of just 68% in the first period – yet looked much improved after the break with the reported tactical tweak seemingly having paid off.

As for Solskjaer, the United boss is believed to have insisted that the game was still there to be won despite a difficult opening period, with the Norwegian ultimately proved right as he saw his side run out 3-2 winners to move to the top of Group F.

The Old Trafford outfit will be hoping to build on that momentum as they take on bitter rivals Liverpool at home on Sunday in the Premier League.