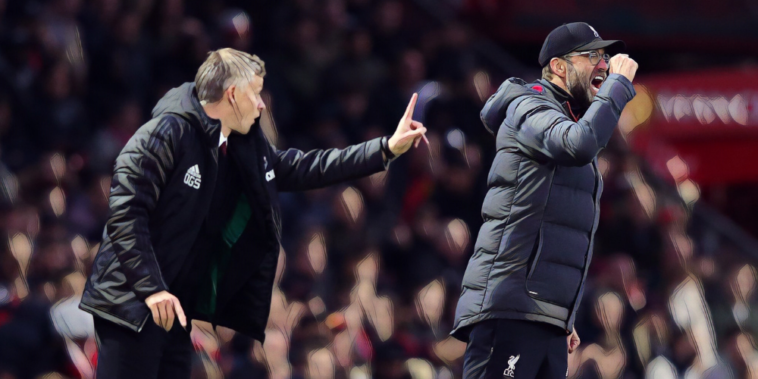 Manchester United face Liverpool in the biggest fixture of the Premier League’s ninth round of fixtures, as English football’s most successful sides renew rivalries at Old Trafford.

Chelsea will be hoping to maintain their lead at the top ahead of the visit of struggling Norwich, whilst Manchester City travel to face a Brighton side who will no doubt provide awkward opposition.

Elsewhere West Ham and Tottenham meet in the capital, whilst Friday Night Football should prove a fascinating watch as Arsenal host Aston Villa at the Emirates.

Can Arsenal learn to win ‘dirty’?

Mikel Arteta this week spoke on his desire to Arsenal to learn how to win ‘dirty’, in the wake of Jurgen Klopp’s comments following Liverpool’s hard-fought win at Atletico Madrid in midweek.

The Gunners have seen their recent momentum stall following some fortuitous back-to-back draws with Brighton and Crystal Palace respectively, but remain unbeaten in five Premier League fixtures ahead of Aston Villa’s arrival at the Emirates this evening.

Dean Smith’s side should provide a stern test of Arsenal’s credentials, with Villa having already shown during visits to Chelsea and Manchester United this season that they are prepared to play on the front-foot and their approach should lead to an entertaining encounter.

Danny Ings and Ollie Watkins have the potential to cause problems for the Gunners’ new-look defence and will no doubt have their moments. Arteta will need his side to weather a storm at times if Arsenal – currently 12th in the division – are to secure three points and begin moving back in the right direction.

Brendan Rodgers has one almighty selection headache, with Leicester’s embarrassment of attacking riches a welcome dilemma for the Foxes’ boss.

Jamie Vardy has been in electric mood this season and has scored in each of his past four games, leading the race for the Premier League’s Golden Boot alongside Liverpool’s Mohamed Salah.

The evergreen forward remains the leading light for Leicester, but Rodgers’ plans have been complicated following the form of Kelechi Iheanacho and Patson Daka in midweek.

Daka produced a scintillating showing to score four goals against Spartak Moscow on Wednesday evening, whilst Iheanacho has a goal and three assists since returning to the starting side for the past three fixtures.

Add in James Maddison, Harvey Barnes and Ayoze Perez to the mix and Rodgers has some task keeping his compliment of quality attacking options content.

Thomas Tuchel’s decision to select Romelu Lukaku in midweek has been proved the wrong one in hindsight, the forward sustaining an ankle injury in comfortable Champions League win over Malmo.

Chelsea would have no doubt eased past the Swedish side even in the absence of the Belgian forward, who is now expected to miss around a month of action for the European champions.

Timo Werner also sustained a hamstring problem in that clash, leaving the Blues without a recognised centre-forward option for this week’s clash with Norwich and the foreseeable future.

Kai Havertz will be expected to reprise his role as a false nine and the onus will be on the Germany international to shoulder the goalscoring burden in the coming weeks, as Chelsea look to maintain their lead at the top of the division.

Brighton’s acid test against the champions

Brighton sit inside the Premier League’s top four ahead of the division’s ninth round of fixtures, with Graham Potter’s side having been rewarded for their positive performances with results this season.

The Seagulls boast the fourth-best defensive record in the division in terms of expected goals against (xGA) this season and will need to be at their solid best as Manchester City rock up at the Amex Stadium this weekend.

Brighton’s haul of eight goals in eight games will need to be improved if the club are to mount a sustained challenge for the European places, and this weekend’s showdown with the champions provides Potter’s side with a benchmark to test themselves against.

The penultimate fixture of last season saw Brighton come from two goals down to win 3-2 in May and the Seagulls will need similar resolve against a City side in ominous form in midweek.

The axe finally fell on Steve Bruce this week as the Newcastle manager finally made his expected exit from St James’ Park, the unpopular head coach leaving by ‘mutual consent’ as the new ownership prepare for sweeping changes.

Paulo Fonseca has been strongly linked with filling the vacant position, though it will be first-team coach Graeme Jones who will take charge as the Magpies travel to face Crystal Palace this weekend.

Defeat to Spurs last time out highlighted that there is huge work to do before the Newcastle fans can genuinely dare to dream, their side currently 19th in the division and without a win in eight games.

No side has conceded more than Newcastle’s 19 goals so far this season and the onus will be on Jones to galvanise a struggling side as he attempts to provide the incoming manager with a platform to build on.

Broja can take chance in battle of goal-shy sides

Armando Broja marked his first Premier League start with a goal as Southampton earned their first win of the season against Leeds last weekend, the Chelsea loanee producing an impressive performance after being handed his opportunity under Ralph Hasenhuttl.

Much of the talk regarding Danny Ings’ replacement was that of Adam Armstrong, but the summer signing from Blackburn has failed to find the goals his performances have deserved so far this season.

Broja’s showing last weekend was an encouraging one and the 20-year-old certainly proved to be a handful, with the Albania international hopeful of maintaining his place after demonstrating an understanding with Nathan Redmond.

Norwich are the only side to have scored less goals than Southampton and Burnley who meet this weekend, and the result will hinge on which side’s forward options can make the most of their chances at St Mary’s.

Kane edging back to his best?

It’s been a slow start to the season for Harry Kane, whose struggles have been attributed to the distraction of the summer transfer speculation surrounding his Tottenham future.

Having seen a desired move away from the club fail to materialise, the England captain failed to find the net in his opening six league appearances of the campaign, before getting off the mark at Newcastle last weekend.

Kane’s goal was an excellent finish after beating the offside trap, whilst he also recorded his first assist of the campaign in a sign he is getting back to his best.

An in-form Kane could prove all the difference in Spurs‘ pursuit of a top-four finish this season and the 28-year-old will hope to continue his fine recent record against West Ham this weekend, having netted 11 goals in his past 12 appearances against the Hammers.

Salah to pile the pressure on Solskjaer?

Arguably the most anticipated fixture on the English football calendar, Manchester United take on Liverpool this weekend with the stakes high at Old Trafford.

Both sides head into the contest after midweek Champions League wins, though the Red Devils’ stirring comeback against Atalanta merely papered over the cracks of their concerning recent form.

The pressure will be on Ole Gunnar Solskjaer who is without a win in three league games, and defeat this weekend would represent a major setback in United’s hopes of challenging the division’s best sides.

Key to securing a positive result will be containing Mohamed Salah, whose form has been nothing short of extraordinary over the campaign’s opening months.

The counterattack 👏
The finish 🔥
The celebration 😍@MoSalah sealing the 𝐖 at Old Trafford last season ⚽ pic.twitter.com/Si5ZQjoH7n

The Egyptian scored twice and for a club-record ninth consecutive game as Liverpool won at Atletico Madrid on Tuesday evening, and will no doubt be relishing the chance to take on a Red Devils side without a clean sheet in their past 12 home games in all competitions.