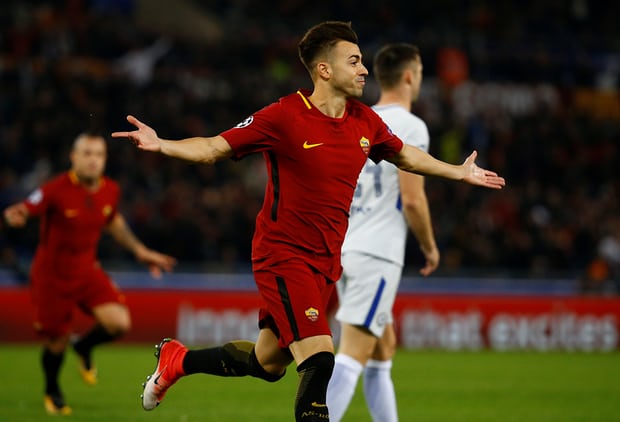 Antonio Conte was embarrassed on his return to Italy as AS Roma humbled Chelsea in the Champions League.

A fortnight ago, the reverse tie was a cracker. Chelsea were 2-0 up before Roma made a remarkable comeback to lead 3-2 until Chelsea, courtesy of an Eden Hazard header, equalised. A huge atmosphere expected at the Stadio Olimpico with the winner potentially determining the outcome of the group.

The match did not start disappointingly. Inside the first minute Chelsea’s Pedro played in (only for the goalkeeper to collect) and a right footed rocket from El Shaarawy. 1-0 inside 40 seconds. The Champions League in all it’s glory. The ball was played forward by Kolarov and whether the knock down from Dzeko was intentional or not, El Shaarawy was quicker than Alonso to react.  He caught the ball on the outside of his boot to rifled home. The stadium erupted.

The next 20 minutes saw Hazard try his best to carve out an equaliser. Those jinking runs, those take and turns, he was showing all the qualities of a world class player without making a breakthrough. His few shots on target were all saved by the keeper. The biggest opportunity for Chelsea to level things came from a Kolarov mistake (who otherwise was excellent on the night). He went to clear the ball but it ricocheted off Pedro and fell kindly to Morata just in front of goal. Remarkably, the Spanish International who started off his Chelsea career so well, skied it.

Despite Chelsea’s threat, Roma always looked like they had more goals in them. 37 minutes in, Nainggolan played a ball forward, Rudiger was ball watching and presumably didn’t see the run of El Shaarawy behind him and thought the ball would run straight through to Courtois. However, El Shaarawy again reacted first and coolly put it past the Chelsea keeper. Chelsea still pushed for a goal in that first half, with the pick of the bunch being Alonso cutting in only for his shot to be palmed out of play by Alisson.

The second half saw a deflated Chelsea, they offered very little in terms of clear cut chances. Roma did most of the probing. Just like with Alonso in the first half, Perotti was given the ball and cut inside, unlike Alonso, he beat the keeper. 3-0 Roma, game surely over 63 minutes in.

A talking point in this match was the comical Chelsea defending that last season looked so solid. Dzeko was running with the ball and all three of Rudiger, Azpilicueta and David Luiz surrounded him, the striker turned and played in Perotti who was left with only the goal keeper to beat, somehow it blazed high. Nainggolan also had a strike saved and a header from Mandalas was somehow tipped over by Courtois.

Very poor performance from Chelsea and an excellent one from Roma. It really could have and should have been 6-0 tonight. Good news for both teams, Qarabag held Atletico for a second consecutive draw, nearly all but putting them down into the Europa League.