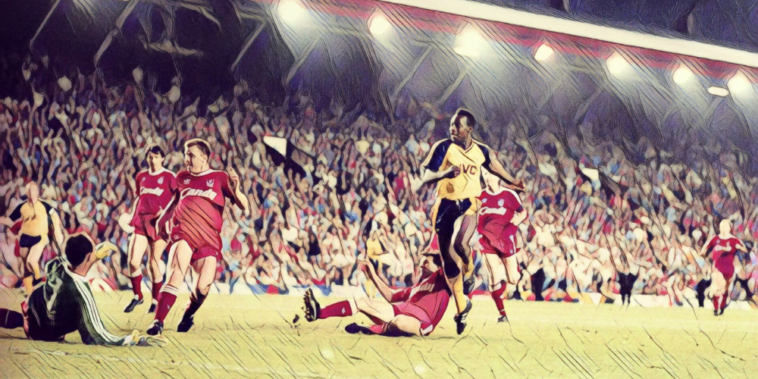 Manchester City’s last-gasp title triumph in 2012 is often noted as the most dramatic conclusion to a league campaign, although that victory pales in comparison to Arsenal’s final day heroics against title rivals Liverpool at Anfield in 1989.

The hosts headed into the then-First Division title decider with a three-point cushion over the North London side, knowing that only a two-goal margin of victory would be enough for the Gunners to finish the season at the summit.

Already an eagerly-anticipated encounter, the fact that the game was forced to be rescheduled only served to heighten the excitement, with the clash taking place a week after the rest of the division had come to an end – the Hillsborough tragedy having forced the original fixture to be postponed.

League leaders Liverpool were the undoubted favourites, having already clinched the FA Cup just a few days earlier, while they also hadn’t lost at home by two or more goals for over three years.

As it was, George Graham’s side managed to upset the apple cart in a frantic climax, as Alan Smith netted early in the second half, before Michael Thomas’ stoppage-time strike clinched the three points and the desired 2-0 scoreline to wrap up the title for the visitors.

Here’s a look then at Arsenal’s triumphant starting XI on that thrilling Friday night encounter on Merseyside in May 1989:

An ever-present in that remarkable campaign, John Lukic has perhaps become a forgotten name in Arsenal’s illustrious history, somewhat falling by the wayside at a club famed for its impressive goalkeepers, notably Pat Jennings and David Seaman.

The Englishman began his career at Leeds United before joining the Gunners in 1983, spending the next seven seasons at Highbury and playing every single minute of the club’s 1988/89 title triumph.

He departed the following season to return to Elland Road and won the title once more in 1992, before returning to north London four years later, spending five seasons as deputy to David Seaman.

That return to Arsenal also saw him become one of just a handful of players to feature in the top-flight across four decades, featuring three times in the 2000/01 campaign prior to his retirement.

Much of the success on the night was down to manager George Graham’s decision to include David O’Leary in a sweeper role – as he had done on occasion that season – with the tactical shake-up paying off as Arsenal repelled the likes of Ian Rush, John Barnes and John Aldridge.

An iconic figure in the club’s history, the former Republic of Ireland international remains the Gunners’ record appearance maker (772), having spent eighteen years at the club after making his senior debut in 1975.

The central defender won two League Cups, two FA Cups and two league titles during his time in north London, adding to the success in ’89 with another league title two years later, before making the move to Leeds United in 1993.

After a brief stint in Yorkshire as a player, he later took charge at Elland Road in 1998, notably guiding the club to the semi-finals of the Champions League in 2001.

Lee Dixon enjoyed a 14-year stint at the club after joining from Stoke City in January 1988, with his first full season in north London ending in triumph at Anfield.

The right-back made 33 league appearances that season and 616 in total across his career with the Gunners, remaining the club’s first-choice right-back for well over a decade, despite only featuring 22 times at international level for England.

After also playing his part in the 1991 title success, Dixon featured heavily during the early seasons of Arsene Wenger’s reign, winning a domestic double in 1998, before playing a more sporadic role as the club repeated the feat in 2002 in his final season before retirement.

Tony Adams was the leader and captain of this victorious Arsenal side, the Englishman amongst finest central defenders the country has produced and a one-club man having spent his entire playing career in north London.

Having made his debut as a 17-year-old in 1983, he was named skipper at the age of just 21, ending his first season with the armband as a title winner, with the club’s rock solid defence integral to their success under Graham.

Despite struggling with alcoholism during his time at the club, he remained an integral asset into Wenger’s early years, becoming the first player in history to captain title-winning sides across three different decades, after doing so during the 2001/02 campaign.

His hugely successful playing career – which also included 66 caps for his country – would come to an end at the end of that season after lifting the Premier League trophy, calling time on his stint at the club with only O’Leary having made more than his 674 appearances across all competitions.

Partnering Adams for much of his time at the club was Steve Bould, the centre-back following former Stoke teammate Dixon to Arsenal in June 1988 and featuring 30 times in the league during his title-winning debut campaign.

Bould spent the next 11 years in north London in a playing capacity, before returning in 2001 for a role in the youth set-up, after ending his playing career with a solitary season at Sunderland.

Since then he has held a variety of roles at the club, stepping up as Wenger’s assistant in 2012 while also becoming manager of the under-23 side in 2019, before being relieved of his duties at the end of last season.

Completing an iconic backline is left-back Nigel Winterburn, who joined Arsenal from Wimbledon in 1987 and went on to spend 13 years at the club, winning three league titles, two FA Cups, a League Cup and a European Cup Winners’ Cup.

Originally deployed as a makeshift right-back, the Englishman eventually solidified his place on the opposite flank prior to the 1988/89 season and remained as first-choice for more than a decade, with both Graham and then Wenger using that settled and talented defence as a bedrock for success.

Winterburn – who left the Gunners for West Ham United in 2000 – also made his mark in an attacking sense in the win over Liverpool to help clinch the title, curling in the free-kick that was headed home by Alan Smith to make it 1-0.

The man to enjoy the original Sergio Aguero moment, Michael Thomas’ etched his name into Arsenal and football folklore with his last-gasp strike at Anfield, his strike proving the difference in a nail-biting title decider.

Seeking another goal to topple the champions after Alan Smith’s opener, up stepped the midfielder to defy the odds and wrestle the title away from the Merseysiders, Thomas latching onto a Smith flick-on and evading the sliding Steve Nicol before poking home past the onrushing Bruce Grobbelaar.

Ironically, following that headline-grabbing, game-winning moment, the Gunners youth product would sign for Liverpool two seasons later at the end of another title-winning season in north London, spending seven years on Merseyside, before ending his career in 2001 after brief stints at Middlesbrough, Benfica and Wimbledon.

A legendary figure among Arsenal supporters, David Rocastle – or ‘Rocky’ – rose through the youth ranks to become a key player for the club, his speed and trickery setting him apart as one of the most gifted members of this side and of his era.

After making his debut as a teenager in 1985, the midfielder spent the next seven years as a vital player under Don Howe and Graham, before being surprisingly moved on to Leeds in 1992 despite his own opposition to the move, as well as that of the club’s supporters.

In truth, the former England international failed to rediscover his previous form at Elland Road, spending just a solitary season at the club before brief, unsuccessful stints at both Manchester City and Chelsea.

Kevin Richardson was one of the few players to have tasted title success prior to his move to north London, winning the FA Cup, UEFA Cup Winners’ Cup and the First Division title during his six-year stint at Everton under Howard Kendall, before joining Watford in 1986.

After a solitary season with the Hornets, the Newcastle-born midfielder was snapped up by Arsenal and went on to make 121 appearances for the club over the following seasons, before signing for La Liga side  Real Sociedad in 1990.

He made a telling impact in the closing stages on that day at Anfield, winning the ball back from John Barnes in stoppage time in the build-up to Arsenal’s pivotal second.

It’s perhaps forgotten just how good of a player Paul Merson was, the now TV pundit having spent 12 impressive seasons in the Arsenal first-team, after rising through the youth ranks to make his debut in 1985.

A gifted midfielder, capable of playing through the middle or on either flank, the former England international truly made his mark in that glorious 1988/89 season, netting ten times in the league to win the PFA Young Player of the Year award.

He netted a further 13 goals as the Gunners won the league title once again in 1990/91, before making a surprise switch to second-tier Middlesbrough in 1997, earning a place at the 1998 World Cup despite not playing in the top-flight.

A move to Aston Villa followed that summer, before spending solitary season at Portsmouth in the 2002/03 campaign, helping fire the club to promotion to the Premier League. He retired from professional football in 2006 after a spell at Walsall.

Alan Smith proved to be the difference-maker in that final day title decider, with his 53rd-minute header and late assist proving pivotal, as he capped what had been a fine campaign in which he finished as the division’s top scorer with 23 goals.

The centre-forward had joined from Leicester City in 1987 and spent eight years with the Gunners, scoring 115 goals in 347 games, including bagging another Golden Boot following the 1990/91 title-winning season with 22 league goals.

A key component in those two title wins, Smith also netted the only goal in the 1994 European Cup Winners’ Cup final victory over Parma, before calling time on his career a year later.

Martin Hayes entered the fray as a 73rd-minute replacement for Paul Merson, having made the majority of his appearances that season off the bench after failing to build on his early promise.

The left-winger had scored 24 goals in all competitions during the 1986/87 season after making his debut as a 19-year-old in 1985, but was never able to replicate that form with both his goals and his minutes dwindling in the years that followed.

Hayes was sold to Celtic in 1990, although only made seven league appearances in three years at the club, spending the remainder of his career in the lower divisions of English football.

Perry Groves was brought on just minutes later in an attacking move by George Graham, the Scotsman substituting centre-back Steve Bould in favour of the forward as Arsenal sought a late second.

Formerly of Colchester, Groves joined Arsenal in 1986 as the first signing of the Graham era, developing into something of a cult figure across the next six seasons, albeit with much of his impact in the 89/90 season having come from the bench.

A move to Southampton followed in 1992, although after making just 15 league appearances at the club he was forced to cut his career short at the age of just 28, due to injury.