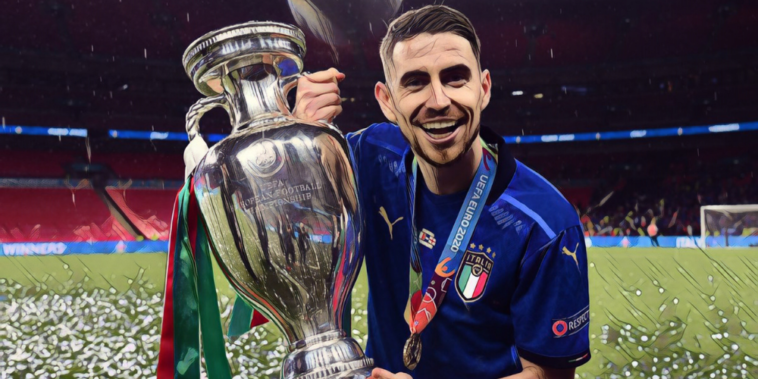 Lionel Messi has been named as winner of the Ballon d’Or for 2021, the Argentine genius coronated as the world’s finest footballer for a record-extending seventh time.

Messi has dominated the honours in recent years and was rewarded with another accolade at the awards in Paris, having inspired Argentina to a first major tournament success in 28 years during the summer’s Copa America.

Robert Lewandowski finished as runner-up following his prolific exploits at Bayern Munich, whilst there was Premier League representation on the podium as Jorginho finished third, the Chelsea midfielder having won both the Champions League and Euro 2020 during a memorable year.

Despite the Premier League’s standing in the global game, Ballon d’Or recognition has been a rarity with just two players having taken the prestigious gong whilst playing in the division.

Several notable names have finished near the top of the rankings without the ultimate success, and following Jorginho’s third-place finish we’ve decided to look back at the past Premier League players to podium in the Ballon d’Or.

Eric Cantona finished third in the voting for the 1993 accolade, having proven the inspiration behind Manchester United’s drought-breaking title success in the Premier League’s inaugural season.

Cantona began the campaign with Leeds before a mid-season switch changed the course of English football history, with the Frenchman scoring 15 goals and providing a league-leading 16 assists as Sir Alex Ferguson’s side were crowned champions.

The forward finished a distant third when it came to the Ballon d’Or, however, with Roberto Baggio named European Footballer of the Year by a large margin.

Dennis Bergkamp was runner-up, the future Arsenal forward having enjoyed a prolific campaign with Ajax before signing for Inter Milan.

Alan Shearer was recognised at the 1996 Ballon d’Or awards, finishing third in the voting following a summer that saw the forward fire host nation England to the semi-finals of Euro ’96.

Shearer had finished as the Premier League’s leading scorer for a second successive season at Blackburn, before winning the European Championship’s Golden Boot as the Three Lions reached the last four.

That summer also saw Shearer complete a world-record transfer to Newcastle, where he claimed a third divisional Golden Boot in succession during his first season at St James’ Park.

Having formed part of Manchester United’s treble-winning side, David Beckham finished as runner-up for both the Ballon d’Or and FIFA World Player of the Year Awards in 1999.

Beckham bounced back from his role in England’s exit at the 1998 World Cup to enjoy a season of stunning success for the Red Devils, scoring nine goals and providing 17 assists across all competitions.

Eight of those assists came during United’s run to Champions League success, though it was not enough to see the midfielder beat Barcelona superstar Rivaldo to club football’s biggest individual awards.

Michael Owen became the first Premier League footballer to win the Ballon d’Or in 2001, the forward acknowledged for his role in a season of huge silverware success for Liverpool.

It is perhaps inconceivable that a star operating outside the Champions League could claim the accolade, but Owen’s 28 goals as Liverpool won a UEFA Cup, FA Cup and League Cup treble saw him beat Raul and Oliver Kahn to the Ballon d’Or.

Michael Owen won the Ballon d'Or four days after his 22nd birthday and it doesn't get spoken about enough 🏆 pic.twitter.com/Ay2xHrxXfE

He also scored a stunning hat-trick as England thrashed Germany 5-1 in World Cup qualification, to become the second-youngest winner of the Ballon d’Or being Brazil’s Ronaldo Nazario.

He is also one of just four Englishman to have won the honour, following Sir Stanley Matthews, Sir Bobby Charlton and Kevin Keegan.

Thierry Henry can count himself hugely unfortunate to have never received the Ballon d’Or, having twice finishing inside the top three of voting, in addition to a fourth-place finish in 2004.

Henry finished as runner-up to Pavel Nedved in 2003, despite a season in which he scored 24 goals and provided 20 assists for Arsenal, with only Lionel Messi having since reached 20+ for each metric in a single season in one of Europe’s top five leagues.

Henry was again on the podium three seasons later, having reached the finals of both the Champions League and World Cup – in addition to winning a fourth Premier League Golden Boot – with Arsenal and France respectively.

Steven Gerrard was one of two Premier League players inside the top three of the 2005 voting, having starred during Liverpool’s shock run to Champions League success under Rafael Benitez.

Gerrard was named as UEFA’s Club Footballer of the Year following his performances in Europe, which included the first goal in the Reds’ comeback from three-goals down against AC Milan in Istanbul.

Despite his presence on the podium, however, he finished a huge margin adrift of eventual winner Ronaldinho, who became the third Brazilian to win the award after Ronaldo (1997) and Rivaldo (1999).

Frank Lampard pipped his England teammate in the 2005 voting to finish second, having played an instrumental role in Chelsea’s first league title success in half a century.

Lampard scored 19 goals in all competitions as Jose Mourinho’s side won the Premier League with a then-record points total, with the midfielder named as FWA Footballer of the Year in 2004/05.

Ronaldinho’s votes (562) dwarfed those of his nearest challengers in Lampard (42) and Gerrard (39), however, in what proved a successful season for Premier League players with three names inside the top four of the voting.

Cristiano Ronaldo became the second Premier League player to win the Ballon d’Or in 2008, having finished as runner-up to Kaka for the accolade the previous season following a true breakthrough campaign.

Ronaldo’s first coronation as winner of the Ballon d’Or came after inspiring Manchester United to Premier League and Champions League success in 2007/08, scoring 42 goals in all competitions including scoring against Chelsea in the latter final.

The Portugal international spent a further season with the Red Devils before joining Real Madrid in a world-record deal, winning a further four Champions League trophies and four Ballon d’Or awards during his time at the Bernabeu.

Lionel Messi is the only player (7) to have won more Ballon d’Ors than Ronaldo (5), who has failed to finish inside the top three of the voting just twice in the past 14 editions, in 2010 and 2021 respectively.

Fernando Torres joined Ronaldo on the podium in 2008, finishing behind the Portuguese superstar and Messi in the voting.

Torres had enjoyed an excellent debut season at Liverpool to score 33 goals in all competitions, breaking the record for league goals scored by a foreign player in their first Premier League season.

The Spanish forward then helped La Roja end decades of underachievement to win Euro 2008, scoring the final winner as Germany were beaten 1-0 in Vienna.

More than a decade passed before a Premier League footballer was next recognised on the global stage, with Liverpool’s Virgil van Dijk named as runner-up in 2019.

Defenders have notoriously found it difficult to earn individual accolades with just three – Franz Beckenbauer, Mattias Sammer and Fabio Cannavaro – having won the Ballon d’Or, though the Dutchman lost a narrow result by just seven votes (0.4%) to Lionel Messi.

Van Dijk’s claim came after being named as PFA Player of the Year in England, having starred during Liverpool’s run to Champions League success under Jurgen Klopp.

Jorginho became the 11th Premier League player to finish in the top three of the Ballon d’Or voting, capping a remarkable turnaround in his fortunes after a difficult start to his Chelsea career.

The midfielder has become a central figure for both club and country and enjoyed an unforgettable 2021, winning both the Champions League and Euro 2020.

Jorginho’s role in the west Londoner’s European success saw him named as UEFA Men’s Player of the Year, whilst he became the first Italian to end on the Ballon d’Or podium since Fabio Cannavaro and Gianluigi Buffon finished as the top two in 2006.