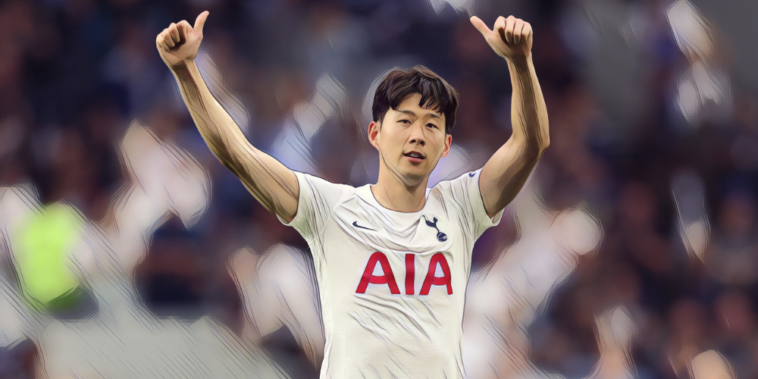 Arsenal face Tottenham this weekend as North London rivalries are resumed at the Emirates, both sides in need of a positive result to boost their faltering fortunes.

The Gunners have bounced back from the worst start to a season in their history with successive wins, but remain some way adrift of the division’s leading sides as Mikel Arteta’s team seek a return to Europe next season.

Spurs started strongly but have suffered back-to-back losses to drop to seventh, and could even fall behind their capital rivals should they suffer defeat by two or more goals on Sunday.

Ahead of a huge clash, we pick our Arsenal and Tottenham combined XI.

Hugo Lloris has remained Spurs number one this season despite the summer arrival Pierluigi Gollini, with the veteran’s experience and quality ensuring he starts in our combined side.

Lloris has kept three clean sheets in five league fixtures so far this season, despite his 18 saves being the second-highest figure of any goalkeeper in the Premier League this term.

Lloris has been a fine servant to Spurs and is the leader of this side, with the World Cup winner earning the nod over Arsenal duo Bernd Leno and Aaron Ramsdale.

It’s early days in the Premier League career of Takehiro Tomiyasu, but the Japan international’s first performances for Arsenal will have been hugely encouraging for Mikel Arteta.

The summer signing has helped the Gunners to consecutive clean sheets, winning 11/12 aerial duels and impressing with his tenacity and competitiveness at right-back.

Takehiro Tomiyasu for Arsenal against Burnley:

Japhet Tanganga has endured a mixed start to the season for Spurs at right-back, though hopes are high that Emerson Royal can prove to be the solution to a problem position for the north Londoners.

Ben White is still the same player who won plaudits and admirers at Brighton last season, but perceptions have shifted following a move to Arsenal and the accompaniment of a £50m price-tag.

The 23-year-old remains a footballer with much to learn, but has the attributes to be a key figure for a new-look Arsenal with his comfortability in possession and ability to progress the ball forward.

White is not the domineering defender some would like, but he’s a talented footballer who will thrive alongside the right partner at the heart of the Gunners’ defence.

Including an all-Arsenal centre-back pairing would have been deemed foolish just a few weeks ago, but the return to fitness of Gabriel has provided the Gunners with increased assurance in recent weeks.

The Brazilian faded following a superb start last season and will be hoping to rediscover his best form this season, with the 23-year-old excellent as Arsenal ground out an uncharacteristic battling win at Burnley last weekend.

Arsenal have now won each of the last seven league games Gabriel has started and kept five clean sheets in that time, as opposed to a win percentage of just 14% in the last seven Premier League game he has missed.

Cristian Romero’s lack of minutes this season prevents his inclusion, whilst both Eric Dier and Davinson Sanchez can be hit and miss in a difficult selection at centre-back.

Arguably the most competitive position on our North London team sheet, we’ve sided for Sergio Reguilon in the left-back toss-up with Kieran Tierney.

The latter has become a fans’ favourite at the Emirates for his sheer will-to-win and exemplary attitude, whilst he leads Reguilon for chances created and crosses attempted so far this season.

However, Reguilon betters his counterpart for crossing accuracy, forward passes, ground and aerial duels won, and interceptions per 90 during the 2021/22 campaign to date.

Tottenham’s midfield enforcer, the arrival of Hojbjerg last summer was a shrewd piece of business from Spurs as the club capitalised on the midfielder’s contract situation at Southampton.

Since then the Denmark international has been a leader and integral figure in the side, leading the Premier League for pressures, tackles and tackles won in 2020/21.

Arsenal’s mini-revival has coincided with Thomas Partey’s return to fitness, with the midfielder having endured a frustrating period since arriving from Atletico Madrid in 2020.

The Ghana international is capable of dominating engine rooms for the Gunners and produced a fine performance in the win over Burnley last time out, anchoring the midfield and providing much-needed cover ahead of the centre-back duo.

Partey’s presence and dynamism can provide Mikel Arteta’s side with a huge lift this season, provided he can remain clear of the injury issues that have impacted his time in North London to date.

Emile Smith Rowe’s emergence was the silver lining in an otherwise gloomy season for Arsenal last term, the academy graduate making an impact after being handed his opportunity in the senior side.

Inventive, technical and comfortable playing predominantly with one and two touch, Smith Rowe has shown he can speed up the tempo of games in advanced areas of the pitch.

After scoring seven goals and providing seven assists last term, the 21-year-old will hope to improve on those numbers this time around as Arsenal hunt continental qualification.

Another product of the system at Arsenal, Bukayo Saka’s performances for England at Euro 2020 showcased just what he can provide when given an opportunity to flourish.

The 20-year-old has demonstrated his quality after flourishing in multiple roles for club and country, starring at full-back and further forward and proving comfortable on either flank.

Saka’s speed and direct approach troubles defenders and Arsenal will have been pleased to see the youngster produce an impressive Carabao Cup cameo in midweek, ahead of Sunday’s showdown with Spurs.

Spurs’ hopes of a successful season are largely pinned on their forward firepower, with Son Heung-Min amongst the elite wide forwards in the Premier League.

The South Korean combines speed, skill and a clinical touch with a desire to run himself into the ground for the cause, his signing of a new long-term contract earlier this year a huge boost for the North Londoners.

Son has scored 109 goals in all competitions since signing for Spurs in 2015, including a career-best haul of 17 in the Premier League last term – his fifth consecutive campaign hitting double digits.

The all-time record goalscorer in North London derbies will have another opportunity to add to his haul this weekend, Kane ready to make a difference having seen a summer move to Manchester City fail to materialise.

Kane has been one of the greatest goalscorers of his generation since emerging from Spurs’ academy ranks, winning three Premier League Golden Boots and rising to seventh amongst the division’s all-time leading scorers.

Last season saw the 28-year-old lead the Premier League for assists alongside his third Golden Boot – Kane a forward capable of it all and amongst the best number nines on the planet at present.

Romero not being in this is embarrassing