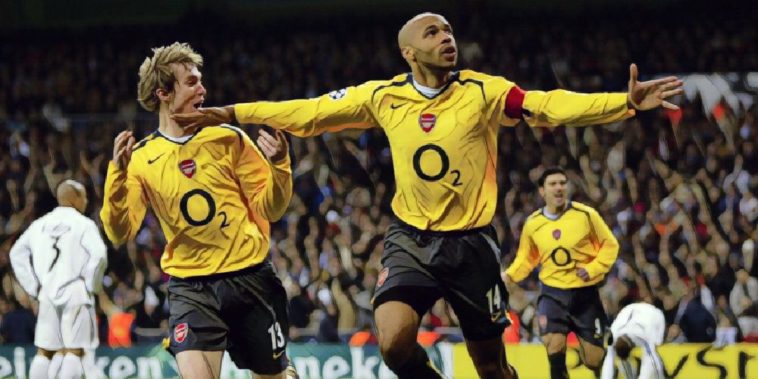 The new Champions League season is now well underway following match day two and Manchester City, Liverpool, Chelsea and Tottenham are the English club’s looking for European success this season, each with their own hopes of lifting the ultimate prize.

English football’s leading sides showed their class in European competition last season, with all-Premier League finals in both of the continent’s major tournaments.

Throughout the Champions League era we’ve seen some iconic performances from English side’s and we’ve decided to look back at some of the players who made those happen for England’s top sides.

Regarded by many as the club’s greatest ever player, the French forward ultimately had to leave North London to fulfil his ambition of winning Europe’s biggest prize.

In a glittering Arsenal career, Henry would make 78 Champions League appearances for Arsene Wenger’s side, scoring 35 goals and producing some memorable performances.

His scintillating performance in a 5-1 win at Inter Milan remains one of his finest in an Arsenal shirt, whilst he captained the side to the 2006 final scoring that winning goal against Real Madrid at the Bernabeu on the way.

Defeat in that 2006 final would ultimately be the closest Arsenal have come to lifting the prize, though Henry would finally secure himself a winners medal following his move to Barcelona in 2009.

The seventh-highest goalscorer in the competitions history, Henry made his mark during his 78 appearances in the red of Arsenal.

The iconic captain is Chelsea‘s highest appearance maker in the Champions League, having been a cornerstone of the team which became regulars in the competition following Roman Abramovich’s takeover of the club in 2003.

Having seen his side agonisingly defeated at the semi-final stage in 2004, 2005 and 2007, Terry would eventually lead his side to a maiden final in 2008, only for the showpiece in Moscow to finish in heartbreaking fashion for the former England defender.

A 1-1 draw with Premier League rivals Manchester United saw the final head to a shoot-out, and after Cristiano Ronaldo’s miss, Terry had the opportunity to win the trophy for his boyhood side. Terry’s now infamous slip in the Russian rain handed the momentum back to Manchester United, who sealed the trophy at Chelsea’s expense.

Four years later Chelsea would have the opportunity for redemption, though in a cruel twist of fate, a red card for Terry in the last four saw him suspended for the final. Chelsea would go on to become the first London side to be crowned champions of Europe, sparking a fully kitted Terry to join in the exuberant celebrations.

Whilst the tournament deciders may not always have been fair to the former England captain, he was undoubtedly a key figure in the club’s finest European campaigns.

Only Ian Callaghan has made more appearances for the Merseyside club than local lad Jamie Carragher, with 91 of the defender’s 737 appearances coming in the Champions League.

He made his debut for the club under Gerard Houllier during their run to the quarter-finals in 2001/02, before being a foundation for some of Liverpool‘s great European nights under the stewardship of Rafael Benitez.

One of the heroes of their improbable Istanbul triumph in 2005, the image of an exhausted Carragher stricken with cramp remains vivid from what was one of the most memorable finals of all-time.

A committed and old-fashioned centre-back, Carragher would also be part of the side which reached the final in Athens in 2007, though AC Milan exorcised the demons of two years prior with victory in Greece.

Manchester City have not quite exerted their influence on Europe’s biggest stage since their billionaire takeover as of yet, though that is not without the trying of their all-time appearance maker in the competition.

Argentine forward Aguero has scored 32 goals in just 70 Champions League appearances during his time at the Etihad, with a hat-trick in the 3-2 comeback win over Bayern Munich a particular highlight. Aguero would score twice in the final five minutes to seal a win and keep City’s hopes of qualifying to the knock-out stages alive

He would also confirm himself as the greatest goalscorer in the club’s history on another European night, his 178th for City coming in an away fixture at Napoli, an iconic moment as he went past Eric Brook as the club’s all-time record goalscorer.

An unsurprising inclusion on this list, the Welsh international’s career spanned more than two decades as he became the most decorated footballer in the history of British football.

Handed his debut as a 17-year-old under Sir Alex Ferguson in 1991, Giggs would feature in an incredible 20 Champions League campaigns for Manchester United, reaching four finals and winning the competition twice.

Part of the side which secured that late, late comeback against Bayern Munich to seal the treble in 1999, he would also score in the shoot-out defeat of Chelsea as United were crowned champions of Europe once again in Moscow in 2008.

His 141 appearances in Europe’s premier competition are the fifth highest in history, behind only Iker Casillas, Cristiano Ronaldo, Xavi and Raul.

Having captained France to World Cup glory 12 months before, Lloris will have hoped to be lifting club football’s biggest prize last season, as Tottenham made a surprise run to the final in Madrid.

The French goalkeeper has been virtually an ever-present during Spurs’ emergence as Champions League regulars under Mauricio Pochettino, and played a key role in their run to last season’s showpiece.

Their memorable run would ultimately end in heartbreaking fashion with defeat to Premier League rivals Liverpool, though now in their fourth successive season in the tournament they will be confident of success once again.

Central to their fortunes is likely to be leader Lloris, who has the experience of performing in some of football’s biggest contests, though he does have a habit of producing the odd howler now and then.