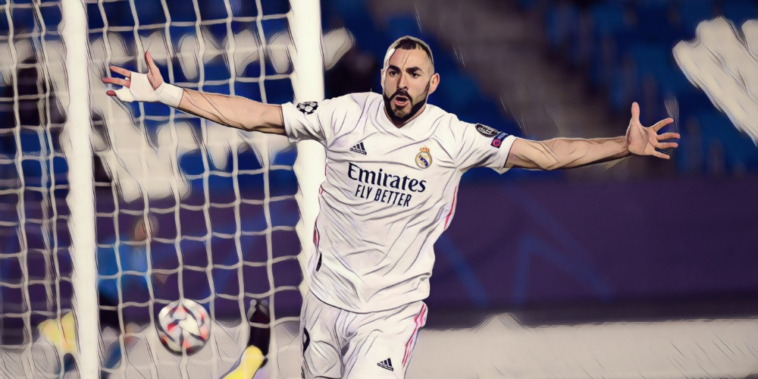 Real Madrid host Chelsea in the first leg of their Champions League semi-final on Tuesday, both sides seeking a positive result as they bid to progress to the showpiece in Istanbul.

The Spanish champions are seeking to reach the final for the fifth time in just eight seasons, having enjoyed a period of huge success on this stage including becoming the first team to defend the trophy in the Champions League era – winning three consecutively between 2016 and 2018.

Chelsea are into the last four for the first time since 2014 and are seeking a second title, confidence having increased in recent weeks following a strong start to Thomas Tuchel’s reign at Stamford Bridge.

Ahead of tomorrow’s clash in Spain, we assess both squads and compile our best combined side.

One of two notable former Chelsea players amongst Real Madrid’s options this week, Thibaut Courtois has continued to enhance his reputation as one of the world’s best since swapping Stamford Bridge for the Bernabeu.

Courtois won two league titles amongst four major honours with Chelsea before moving to Spain, where he has overcome a difficult start to become one of the very best in the division.

The Belgium international was excellent as Real were crowned Spanish champions last season and has continued to maintain his high standards this time around, ranking second for clean sheets and leading all La Liga goalkeepers on save percentage in 2020/21.

Dani Carvajal’s season has been wrecked by injury so far, but the full-back has returned to the side in recent league games and will hope to play a part in Real’s pursuit of La Liga and the Champions League.

The 29-year-old remains one of the most reliable right-backs in European football and registered eight assists during the 2019/20 season, his lengthy spells on the sidelines this season having left Zinedine Zidane without one of his most trusted assets.

Carvajal’s quality and experience places him above Reece James in our combined side, with Cesar Azpilicueta’s best recent performances coming as one of three central defenders.

Sergio Ramos’ absence allows Antonio Rudiger to squeeze his way into our side, the Germany international having enjoyed a fine renaissance since the arrival of Thomas Tuchel at Chelsea.

Having fallen out of favour under Frank Lampard the centre-back is now a mainstay of the Blues side and has contributed to a brilliant defensive record under Tuchel, Chelsea keeping 15 clean sheets in just 20 games under the German.

Rudiger’s domineering style of defending will be crucial to Chelsea’s hopes of reaching the final, having kept shut-outs in three of the four Champions League knockout games played under Tuchel so far.

Real Madrid progressed to the semi-finals despite the absence of Raphael Varane in the last eight, the France international regarded as one of the best centre-backs in world football.

Varane has spent a decade with the club and enjoyed huge success, forming part of three title-winning sides and winning the Champions League on four occasions.

Commanding and composed as the heart of the Spanish champion’s defence, Varane often appears to make defending at the highest level seem effortless – an indication of the quality the 28-year-old possesses.

Replacing Marcelo at Real Madrid was a daunting prospect for any left-back at the Bernabeu, but Ferland Mendy has handled the pressure seamlessly to deem the decorated Brazilian a bit-part player.

Defensively strong, athletic and possessing quality when venturing forward from deep, Mendy is the quintessential modern full-back and has all the ingredients to star for the Spaniards for several seasons.

The France international’s speed – both offensively and defensively – are a vital weapon in Real’s armoury and the 25-year-old wins his battle with Ben Chilwell for a place in our XI.

Tuesday’s clash will see two of the game’s best defensive midfielders go head-to-head in the Spanish capital, the powerhouse of Casemiro against the indefatigable talents of N’Golo Kante.

Kante has appeared back to his best since the arrival of Thomas Tuchel and anchors our combined midfield, his ability to regain and recycle possession second to none amongst the world’s finest defensive screens.

Kante was imperious as Chelsea defeated Atletico Madrid in the last-16 and will need to be at the top of his game once more as the west Londoners seek to pile more misery on Spanish opposition.

Any suggestions that Real Madrid’s ageing midfield was in need of a revamp were ended in emphatic fashion against Liverpool in the last eight, the possession carousel involving Luka Modric and Toni Kroos utterly dominant in the first leg in Spain.

Despite reaching 35-years-old the former remains one of the world’s most talented midfielders, an ever-present in the Spaniard’s engine room and a player who combines lung-busting energy with technical brilliance.

Passing and moving remains the fundamental key to winning the midfield battle and there are few players of this – or any – generation who have mastered it better than the Croatian schemer.

The leading light of the club’s quarter-final win over Liverpool, the first leg in Spain saw ‘Kroos control’ exerted as the Germany international controlled proceedings.

Kroos was brilliant in that clash and showcased his full repertoire of talents, completing more than 90% of his passes and providing a wonderful assist with an exquisite long ball into the path of the rampaging Vinicius Junior.

Shutting down the 31-year-old will be crucial to Chelsea’s hopes of reaching the final if, of course, they can get within five yards of him.

Stationed on the right side of our 4-3-2-1 formation is Mason Mount, who has surely cemented his status as Chelsea’s most influential player this season.

Mount has been a revelation during the current campaign and has normalised consistent excellence, ranking amongst the Premier League’s leading players for expected assists, key passes and shot-creating actions.

The 22-year-old’s creative qualities are mixed with his willingness to put in the hard yards out of possession, with Mount evolving into one of the most complete midfield players in English football.

Scorer of a crucial goal against Porto in the quarter-finals, he will be looked to once again for inspiration in the last four.

Eden Hazard’s career with Real Madrid has been undoubtedly disappointing to date, the winger’s struggles for form and fitness paling in comparison to the player who lit up the Premier League at Chelsea.

At his best however, there are few more captivating players to watch in full flow than Hazard, an attacking talent who combines a low-centre of gravity with an effortless ability to glide past challenges.

The 30-year-old may not be heading into this tie as Real Madrid’s leading light, but ask any Chelsea fan if they would swap their current wide-player contingent for the Belgian international and there would likely be just one answer.

Real Madrid’s talisman continues to be amongst Europe’s best even into the latter stages of a storied career, Benzema having hit 27 goals in just 39 appearances across all competitions this season.

It’s the third consecutive campaign the 33-year-old has hit 27+ for the Spanish champions, part of an overall haul of 276 goals since swapping Lyon for the famed all-white colours of Real Madrid.

Benzema – who has won three league titles and four Champions League trophies with Real – has been a fine servant for over a decade, but has enjoyed arguably the best period of his career since stepping out of Cristiano Ronaldo’s shadow following the five-time Ballon d’Or winner’s move to Juventus.

Just three players have ever scored more Champions League goals than the Frenchman who has thrived amid the added goalscoring responsibility, Benzema one of the best forwards of his generation.