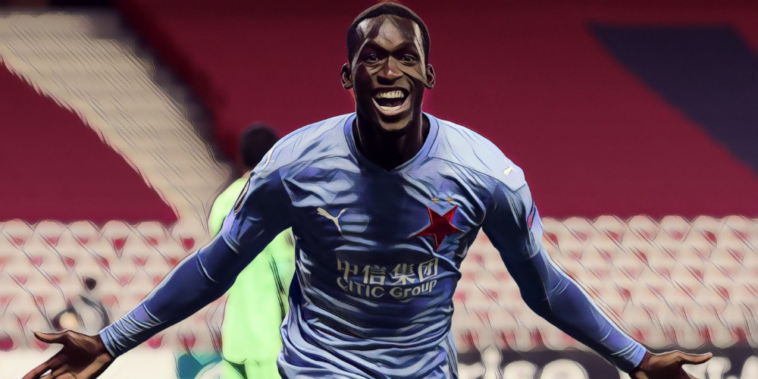 Sima has enjoyed an excellent campaign for Slavia and impressed during the club’s run to the Europa League quarter-finals, the 19-year-old having scored 11 league goals in just 15 starts with a further four coming in his side’s European campaign.

The forward’s performances saw him called into the Senegal squad for the first time last month, winning his first cap against the Democratic Republic of Congo and the youngster is now attracting interest from the Premier League.

The Manchester Evening News are reporting that Sima is the latest young player to be targeted by the Red Devils as part of a new recruitment strategy to sign emerging young talent, with Ole Gunnar Solskjaer’s side have secured deals for teenagers Facundo Pellstri and Amad Diallo in recent windows.

Sima signed for Slavia last summer and has made an immediate impact in the senior side, with the club one game away from completing the entire league season without defeat.

The teenager has played predominantly from the right but his future is viewed at centre-forward, whilst the report says the player would be eligible for a governing body endorsement, which must be obtained by the Football Association in order to play for an English side.

United have been linked with a number of right-sided forwards, in recent months, most notably Jadon Sancho, while they are also keen on signing a centre-forward with Edinson Cavani increasingly expected to leave after just one season, the Red Devils having been linked with Erling Haaland and Harry Kane.