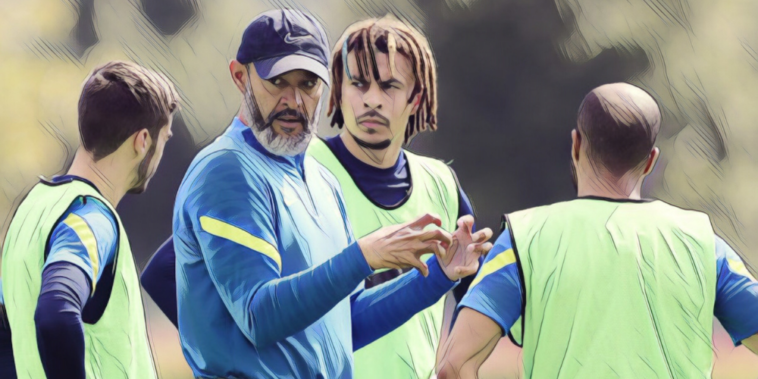 The forthcoming Premier League season will bring plenty of changes as sides bid to improve on the previous campaign’s fortunes, not least in the dugout where four clubs are seeking fresh impetus.

Tottenham, Everton, Crystal Palace and Wolves have all made managerial changes this summer, but which of the quartet of new managers faces the most challenging task ahead?

We’ve assed the difficulty in each new manager’s job ahead of the 2021/22 Premier League campaign.

Tottenham’s protracted pursuit of a Jose Mourinho replacement saw the north London side finally land on Nuno Espirito Santo, the former Wolves manager available after mutually agreeing to leave Molineux following the conclusion of the 2020/21 season.

Whilst not Spurs’ lead target following a succession of failed talks with managerial candidates, the Portuguese at least offers an experienced Premier League option having overseen Wolves’ return to the top-flight and consolidation as a competitive outfit.

The 47-year-old inherits a talented squad that underperformed last season to finish seventh, despite the presence of Golden Boot and Playmaker Award winner Harry Kane amongst their ranks.

Sorting Kane’s future is the first major problem Nuno faces in north London, with the England captain having expressed an interest in leaving this summer in search of silverware, amid strong interest from Manchester City.

The task facing the Portuguese will be made more difficult should Kane depart, though the presence of Daniel Levy as chairman – in addition to the three years remaining on Kane’s contract – places the club in a position of strength.

Reinforcements in forward areas are required following the return of loanees Gareth Bale and Carlo Vinicius to Real Madrid and Benfica respectively, with Danny Ings reported as a potential target after entering the final year of his contract at Southampton.

Additions are also needed in central defence with Spurs’ options at centre-back unconvincing, talks continuing over a deal for versatile Japan international Takehiro Tomiyasu, whilst names including Jannick Vestergaard and Joachim Andersen have also been linked with multiple defensive additions possible.

Strengthening at either end of the pitch will be crucial to Nuno’s hopes of a positive season, as he bids to win over supporters concerned over a perceived pragmatic approach and close the gap to England’s elite.

Spurs made huge progress under Mauricio Pochettino before Jose Mourinho’s indifferent reign, but with both Manchester clubs, Liverpool and Chelsea all anticipated to be strong, returning to the Champions League stage looks a tough ask at present.

Rafael Benitez’s faces arguably the most difficult initial job in winning over his new side’s supporters, the Spaniard’s previous links to Liverpool making him an unpopular appointment amongst sections of the Toffees’ support.

Everton’s recent history has included its fair share of false dawns, with significant investment from ambitious ownership having so far failed to result in tangible progress.

For much of last season, the Merseyside club looked in contention to secure European football, but a poor run of just three wins from their final 12 fixtures saw Carlo Ancelotti’s charges drop to tenth.

A woeful home record – winning just six of their 19 league fixtures at Goodison Park – contributed to their downfall and establishing Goodison as a difficult place to visit will be key to Benitez’s hopes of success.

Benitez has often favoured a methodical 4-2-3-1 system and has moved quickly to strengthen his wide options, though whilst the impending arrivals of Demarai Gray and Andros Townsend add much-needed depth and pace, the duo are hardly calibre of arrival Everton fans were hoping for as a new era is ushered in.

After splashing out on names such as Abdoulaye Doucoure and Allan last summer, the purse strings appear to have been tightened as Everton bid to comply with Financial Fair Play rulings following some excessive and misguided spending in recent seasons.

Benitez has the credentials to get Everton competing higher up the division, but a strong start may be needed if he is to win over a divided fanbase.

Patrick Vieira has returned to the Premier League this summer, with the former Arsenal captain appointed as the new manager at Crystal Palace.

Vieira has earned his coaching stripes with Manchester City’s development side, MLS outfit New York City and French side Nice, before being named as Roy Hodgson’s successor at Selhurst Park.

The 45-year-old faces a huge rebuilding job with an Eagles side who have lacked changes in personnel in recent years, though his squad will need a major overhaul during the summer window following a mass exodus of experienced players.

Andros Townsend, Patrick van Aanholt, Mamadou Sakho and James McCarthy headlined out-of-contract names who have left on free transfers this summer, with Vieira needing to inject some youth and vibrance into what was an ageing squad.

The Frenchman has moved swiftly to make changes, including the eye-catching arrival of 19-year-old winger Michael Olise from Reading. The teenager is raw and inexperienced but has huge promise, having scored seven goals and provided 12 assists in the Championship last term.

Olise will hope to follow in the footsteps of Eberechi Eze, who enjoyed a productive first season in the Premier League last term, helping alleviate the pressure on Wilfried Zaha in attack.

Marc Guehi has also completed an £18m move from Chelsea after impressing during a loan spell in the Championship with Swansea and the 21-year-old will add both speed and youth to the Palace backline.

Vieira retains an admirable faith in young players, but the new Eagles boss must strike the right balance between youth and experience this season following a summer of mass changes.

Wolves will head in a new direction this summer following Nuno Espirito Santo’s departure by mutual consent, the Midlands outfit having failed to continue their recent momentum during an underwhelming 2020/21.

Former Benfica coach Bruno Lage has arrived as the club’s new manager and the supporters will hope the Portuguese can stamp a more attractive brand of football on the side, with predecessor Nuno having overseen a successful if uninspiring style of play.

Lage won the Portuguese league title with Benfica in 2019 and has previous experience of England, spending time on the coaching staff at Sheffield Wednesday and Swansea under Carlo Carvajal before moving into senior management in his own right.

Lage took charge of Benfica mid-way through their 2018/19 success, winning 18 and drawing one of his 19 fixtures – including a record-breaking 10-0 win against Nacional – as the title was secured with a huge 103 goals scored.

The return of Raul Jimenez – who featured for the first time since fracturing his skull in November against Crewe last weekend – will be a welcome boost to Lage’s hopes of success with the Mexican providing Wolves with a focal point they sorely lacked last season.

The loss of Rui Patricio and expected departure of Ruben Neves will see Wolves lose both quality and experience and much may depend on how Lage’s signings hit the ground running, having secured deals for Jose Sa, Yerson Mosquera and Barcelona winger Franciso Trincao.