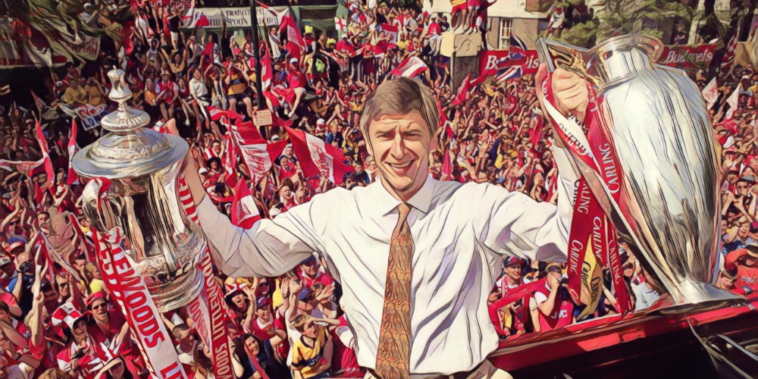 Patrick Vieira has been appointed as the new manager of Crystal Palace this summer, with the former Arsenal captain named as the successor to Roy Hodgson at Selhurst Park.

Vieira brings a wealth of experience having won three Premier League titles as a player at Arsenal, before taking his first steps into coaching at Manchester City, before senior management roles at  New York City and Nice.

Vieira becomes just the eighth Frenchman to take the reins at a Premier League club and it’s fair to say that coaches from across the channel have endured mixed fortunes in English football.

Here are our ratings of every French manager in Premier League history.

The benchmark for French managers in the Premier League, Arsene Wenger arrived at Arsenal as a relative unknown during the mid-nineties before overseeing a revolution in north London.

Wenger’s advocation of innovative sports science methods and knowledge of foreign markets helped transform Arsenal into one of England’s best sides, the Gunners enjoying an intense rivalry with Manchester United as the two sides contested for major trophies across the turn of the millennium.

Wenger then led Arsenal’s famed ‘Invincibles’ side to an incredible undefeated title-winning season in 2003/04, a feat last accomplished by Preston North End a huge 115 years previously.

That season formed part of a record-breaking 49 top-flight games unbeaten for the Gunners, with Wenger responsible for the signings of compatriots including Thierry Henry and Robert Pires – players who helped take the club to a new level.

Wenger’s latter years proved less successful – including a nine-year trophy drought – as Arsenal struggled to compete with new financial superpowers including Chelsea and Manchester City, but he retired as the club’s longest-serving and most successful manager after winning three league titles and record seven FA Cups.

Gerard Houllier was appointed in a bizarre joint-management role at Liverpool alongside Roy Evans in 1998, before taking the position singlehandedly as the Merseyside club looked to emerge from a bleak decade.

The nineties had seen the Reds fall greatly from their position as England’s dominant force in the two decades that proceeded it, but Houllier helped Liverpool compete for prizes once again.

The Frenchman spent six seasons at Anfield and helped Liverpool secure Champions League qualification for the first time, whilst the zenith of his time in charge proved a storied 2000/01 season.

Houllier led Liverpool to UEFA Cup, FA Cup and League Cup success in addition to a top-three finish to secure Champions League football, with the Reds playing every single possible fixture during a marathon campaign of success.

The UEFA Super Cup and Community Shield were added to make it five trophies inside a calendar year, before a second League Cup followed after beating Manchester United in the 2003 final in Cardiff.

Despite a second-place finish in 2001/02, Houllier was unable to guide Liverpool to the title and was sacked in 2004 following two seasons of decline.

He later had a single season spell at Aston Villa, but stepped down by mutual consent following medical advice.

A surprise choice as Fulham manager following his appointment at Craven Cottage, Tigana – a key part of France’s victorious Euro ’84 winning side – moved to the second-tier west London side in 2000.

Tigana had guided Monaco to the Ligue 1 title in the late nineties and made an immediate impact at an ambitious Fulham side, leading the club to promotion to the Premier League as Division One winners.

Tigana led Fulham to a respectable 13th-place finish during their first top-flight campaign in three decades, whilst the club also reached the FA Cup semi-finals, a feat which led to subsequent Intertoto Cup and UEFA Cup qualification.

The Frenchman brought in a number of eye-catching arrivals including Edwin van der Sar and Steed Malbranque, though was surprisingly sacked during his second season despite Fulham being clear of relegation worries.

Tottenham had hoped the appointment of Jaques Santini could take the club to new heights, but the arrival of the highly-respected French coach proved a short-lived and ill-fated experiment.

Santini stood down from his position as France manager to take charge of Spurs after Euro 2004, but after just five months he was gone – citing ‘personal problems’ for his resignation after just 13 games in charge.

A bright start faded fast and after three consecutive losses Portsmouth, Bolton and Fulham in October, Santini stepped down amid rumours of a strained relationship with sporting director Frank Arnesen.

Another blink and you’ll miss him appointment, Alain Perrin took charge of Portsmouth mid-way through the 2004/05 season as the club drifted dangerously above the relegation places.

He guided Portsmouth to safety – including a memorable 4-1 derby thrashing of Southampton which helped condemn the Saints and former manager Harry Redknapp to relegation – but was sacked just months into the following season.

Perrin was accused of losing the dressing room and endured fractious relationships with Portsmouth stalwarts including Arjan De Zeeuw, Steve Stone and Shaka Hislop, his departure coming after winning just four of his 21 fixtures in charge.

Remi Garde lasted just 147 days in charge of Aston Villa during the 2015/16 season, winning just two of 20 league games during a dismal time in charge.

The former Arsenal player had replaced Tim Sherwood on a three-and-a-half-year deal, but his mid-season appointment failed to have the desired effect as Villa plummeted towards relegation during his four-month tenure.

He departed with seven games of the season remaining and after six consecutive defeats, with Villa a huge 12 points adrift of safety.

Claude Puel was named as Ronald Koeman’s successor at Southampton in 2016, but lasted just a single season on the South Coast despite guiding the club to an eighth-place finish and the League Cup final.

Puel’s negative tactics made him an unpopular appointment, whilst Southampton’s eighth-place finish came despite losing 16 games and accumulating 17 fewer points than the previous season.

The Saints scored just one goal in their final six fixtures of the season and managed just one win in eight during the Premier League run-in.

Leicester handed Puel a second opportunity in the Premier League in 2017, but his spell at the King Power Stadium lasted just 16 months.

He guided the Foxes to a ninth-place finish during his first campaign in charge, but an indifferent run of form – including four consecutive home losses – saw Puel sacked during his second campaign.