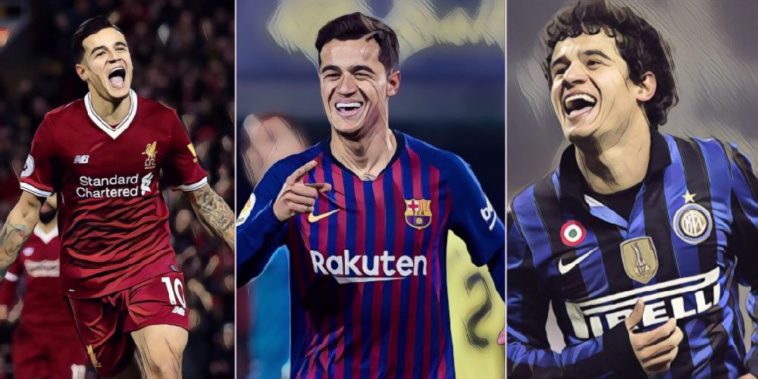 The career of Philippe Coutinho appears at a crossroads following his failure to reignite his fortunes during a season’s loan at Bayern Munich, the Brazilian seemingly set to be on the move once more this summer.

Unwanted in Bavaria or at parent club Barcelona, talks have suggested the 28-year-old playmaker could make a Premier League return with a host of England’s top clubs reportedly eyeing a move for a player who should be at the peak of his powers.

It’s been a sorry period for a player who once starred as one of the finest talents in European football, and we’ve decided to revisit the career of the samba star so far.

Here are our ratings of Philippe Coutinho’s impact at the six clubs he’s played for:

Coutinho’s career began in his native Brazil with Vasco de Gama and flourished in the club’s youth system, the performances of the diminutive star soon attracting attention from across Europe.

Inter Milan won the race for the 16-year-old street footballer and secured his services in a deal worth €4m, before loaning the playmaker back to the Brazilian side given FIFA’s rulings on international transfers for minors.

The teenager became a regular in the first-team over the course of the next two seasons, helping Vasco to promotion after winning the Serie B title. He made 31 appearances and scored five goals, before heading to Italy following his 18th birthday.

Much was expected of the talented youngster following his arrival in Milan with president Massimo Moratti boldly declaring that Coutinho was ‘the future of Inter’.

The lightweight physique of the Brazilian saw him struggle to cope with the demands of Italy’s top tier, however, whilst his game time proved limited for the Nerazzurri. Coutinho also struggled with the off-pitch changes after crossing the Atlantic, despite the presence of his parents and girlfriend in Milan.

He was sent on-loan to Spanish side Espanyol to continue his development, but despite an impressive stint in La Liga failed to establish himself as a key figure upon his return to the San Siro.

His time at the club saw glimpses of his quality but was during a period of managerial upheaval – Inter having six managers in three years during his time in Serie A – which contributed to the youngster’s lack of both rhythm and progress.

It is perhaps that aforementioned loan move to Espanyol which proved the making of the talented teenager, Coutinho thriving in an attack-orientated side under the guidance of Mauricio Pochettino.

The Argentine manager gave his fellow South American a platform to roam and utilise his creativity, the playmaker responding with five goals over the second half of the season.

Espanyol provided the consistency the youngster needed to develop his evident talents, his confidence increasing as he produced a full repertoire of tricks and flicks, including a Ronaldinho-esque under the wall free-kick against Malaga.

Coutinho later became the most expensive signing in the history of Barcelona, but the formative foundations for that move were arguably built on the opposite side of the city.

Liverpool gambled on Coutinho’s creative talents following his failure to force his way into Inter’s plans, beating Southampton – then managed by former Espanyol boss Pochettino – to his signature in the January transfer window of 2013.

The star’s diminutive stature and style initially didn’t seem suited to the often rigorous demands of the Premier League, but the £8.5m fee soon proved to be a bargain as the youngster blossomed under the guidance of Brendan Rodgers.

Coutinho played a key role during the club’s pursuit of the title under the Northern Irishman, forming a fine understanding with Luis Suarez and providing the ammunition for the Uruguayan and strike partner Daniel Sturridge.

The departure of Suarez saw the playmaker continue to grow in importance and he became a talismanic figure for the Merseyside club, Liverpool often looking to the player for inspiration and Coutinho regularly delivering.

The arrival of Jurgen Klopp as manager continued to elevate the player’s game to new heights, whilst he was twice named as the club’s Player of the Season during a five-year spell at Anfield.

Often the metronome of the side whether cutting in from the left or from a more central role, he scored 41 league goals and provided a further 35 assists during his time in the Premier League.

Few players can match his highlight reel of stunning goals from distance, the Brazilian bursting with belief in an exciting Liverpool side before his record departure to Barcelona in 2018.

The dream move which sadly turned into a nightmare for the former Liverpool favourite, Coutinho having spoken of how Barcelona were the only club in world football capable of tempting him away from Anfield.

Such was the Catalan’s interest in the playmaker they were prepared to pay a club record fee to take him to the Camp Nou, Coutinho becoming the third most expensive footballer of all-time when heading to Spain.

It seemed the perfect fit on paper, Coutinho a phenomenal technician and a player capable of moments of genius, but more importantly prepared to sacrifice for the good of the team.

Hopes were high that he could be the long-term replacement for club legend Andres Iniesta, whilst Lionel Messi and former Liverpool teammate Suarez were sold on his abilities to help Barcelona to major silverware.

Coutinho had long looked like a Barcelona player during his time in English football, but rarely having made his hugely anticipated move to Spain’s top tier.

The centre-piece of an effervescent Liverpool side, Coutinho’s time in Barcelona saw him struggle to find his role, his performances indifferent amid a lack of the responsibility he once held on Merseyside.

He made 76 appearances in all competitions and scored 21 goals – winning back-to-back league titles – but after an initial bright start became an increasingly peripheral figure before being deemed surplus to requirements.

Coutinho’s exclusion at Barcelona saw Bayern Munich come calling with the offer of a season-long loan deal, the Brazilian heading to the Bundesliga in a bid to reinvigorate his flagging fortunes.

His time in German football has proven mixed, however, failing to find his role in the Bavarian’s side.

Coutinho lacks the dynamism and pace Bayern often seek in wide areas, whilst Thomas Muller’s sensational form under Hansi Flick – setting a new record for most assists in a Bundesliga season – has seen the forward preferred in a central role behind Robert Lewandowski.

The loanee has shown moments of his quality, scoring eight league goals including a hat-trick in a thrashing of Werder Bremen in December, but has largely struggled to cement his position in the side.

Bayern boss Flick suggested in February that the pressures of Coutinho’s struggles have led to the player often making the wrong decisions in recent fixtures, a telling assessment of a player whose most memorable moments have largely proven instinctive.

His current predicament comes after Bayern opted against an option to sign the player on a permanent basis, which perhaps is the greatest indication of his time in Germany’s top-flight.

Read – Five of best Brazilians to play for Barcelona