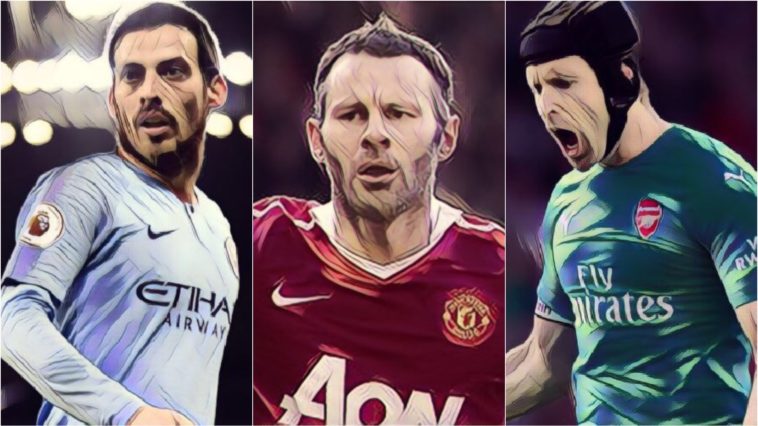 David Silva secured his 200th Premier League win with Man City over Everton last weekend, reaching the milestone quicker than any other player.

The Spanish midfielder became the 25th player to reach 200 wins in his career, giving him more victories than legends such as Denis Irwin, Teddy Sheringham, Shay Given, Didier Drogba and loads more.

Silva is one of only two current Premier League players with 200 or more wins, joining Liverpool‘s James Milner, who has 256.

Wayne Rooney (DC United) and Cesc Fabregas (Monaco) are the only other players still active, albeit abroad, to do so having accumulated 284 and 200 wins respectively.

A four-time entrant in the PFA Team of the Year, a three-time Premier League winner and one of the Invincibles. Yeah, Ashley Cole has won a game or two in his time.

The full-back has garnered his fair share of bad publicity over the course of his career, but the former England international had a career most footballers could only dream of, achieving incredible success at Arsenal and Chelsea. Cole reached the double century in a handy 3-0 win for the Blues over Wolves in November 2011.

The Welsh wing wizard was there for the birth of the Premier League and spent many glorious years winning matches and league titles with Manchester United.

Giggs’ 200th victory came in 2002 with a 2-0 win over Arsenal, just a week after beating Liverpool at Anfield, on their way to an eighth league title. The left-winger finished his career with 407 league wins, more than any other player since 1992.

A stalwart of Chelsea’s staunch defence in the noughties and beyond, the Czech goalkeeper could claim to have been the world’s best player between the sticks for many years – and who would argue with him.

Although the head injury he suffered as a result of a collision with Stephen Hunt in 2006 diminished his powers, Cech was still a tremendous goalie, helping the club win four Premier League titles and the Champions League.

He moved to Arsenal in 2015, where he played for four seasons before retiring from the game. In a cruel twist of irony, his final game was a 4-1 drubbing at the hands of his former club in the Europa League final.

One of the key members of the most successful Chelsea side of all-time, John Terry reached 200 victories in the English top-flight with a huge win over Man United at Old Trafford in April 2010.

Holding the record for almost a decade, the England defender finished his career at the club with 311 league wins in 492 games after claiming multiple trophies, before dropping down to the Championship to play for Aston Villa.

The Spaniard reached the 200 win milestone in lightning quick time, taking just 289 appearances to get there. The remarkable thing about it is that he has failed to win just 89 of them; everyone else who reached that figure had lost at least 100 games before then.

It’s hardly surprising given that Silva has been at Manchester City for a decade, playing a key role in the Pep Guardiola sides that rack up 197 points over the course of back-to-back title-winning campaigns. The diminutive playmaker has been there since the start of the Sky Blue era, so it’s only fitting that he should hold this record.