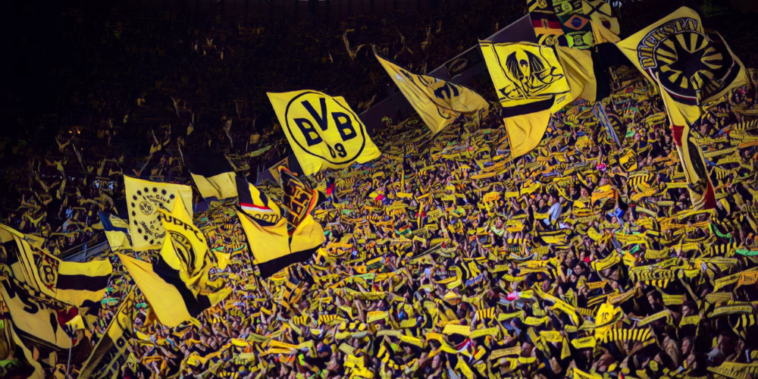 Fans are the lifeblood of the game and each week thousands upon thousands of supporters pack into the ground across Europe’s top five leagues.

A ferocious home support can offer a huge advantage to clubs and we’ve decided to rank the ten teams in Europe with the highest average attendance so far this season.

Tottenham moved into their state-of-the-art Tottenham Hotspur Stadium in April 2019, with its list of features having seen the north London cub’s ground billed as the best in world football.

Spurs’ stadium includes a retractable artificial pitch that is stored below the South Stand, one that holds more than 17,000 fans and is the UK’s biggest single-tier stand.

Seeing the Tottenham Hotspur Stadium transform will never not be cool 🏟 📽 @NFLUKpic.twitter.com/ZOp1n0DeJp

The ground has provided Spurs with a venue to match any in the game and the club’s upgrade from the 36,284-capacity White Hart Lane has been justified, with an average attendance of 61,530 fans so far this season.

Schalke remain one of the best-supported clubs in European football, despite falling on some tough times in recent campaigns.

The club’s financial issues saw Schalke relegated to the second tier of German football for the first time since 1988 in 2020/21, but the Gelsenkirchen club bounced back at the first attempt with the goals of Simon Terodde – who hit 30 in just 30 league appearances – crowning the club champions of the 2. Bundesliga last season.

Since returning to the top tier attendances have increased with the club’s 62,194 average attendance the third-highest in Germany and ninth-highest in Europe.

West Ham are the second Premier League team to feature in the top ten, having had an average of 62,447 fans at the London Stadium this season.

That support makes the Hammers the best-supported club in London so far this season and ranks David Moyes’ team second across the whole of the Premier League for attendance.

The Stade Vélodrome can be an intimidating venue when at maximum capacity and Marseille have leaned on a strong support this season.

Igor Tudor’s side have had the highest attendance in Ligue 1 so far this season with an average of 62,877 fans attending the French side’s fixtures.

There’s reason for optimism at Marseille after a return to the Champions League this season, while Les Olympiens are unbeaten in eight league games in 2022/23.

The San Siro is in its final stages with proposals to demolish and rebuild the famous old ground, as Inter Milan and rivals AC Milan look to build a stadium that can compete with modern football’s finest.

Inter have had an average attendance of 70,365 fans for home fixtures this season, down from the 80,018 capacity of the San Siro, also known as the Stadio Giuseppe Meazza.

The plans for the new stadium will reduce the capacity to around 60,000 fans, though the proposals are for state-of-the-art facilities that will make Milan’s newest monument the ‘greatest ground in Europe’

Milan edge out their rivals for attendance figures, with an average of 72,169 fans having turned up for the Rossoneri’s games in the stadium that the two clubs share.

Stefano Pioli’s side were crowned as champions in Italy last season, securing a first Scudetto triumph since the 2010/11 campaign. Milan will be aiming for back-to-back titles this season in what promises to be a thrillingly competitive Serie A season.

Manchester United have the highest attendance figures in the Premier League, with Old Trafford having welcomed an average of 74,674 fans to home fixtures this season.

There has been criticism over how the ownership have allowed the stadium to fall behind rivals both in the Premier League and wider Europe, but the Red Devils’ support remains unwavering and their fanbase populous.

A strong run of form under new manager Erik ten Hag has seen the atmosphere improve in recent weeks.

Bayern Munich rank third for average attendance in Europe this season, narrowly ahead of Manchester United at 75,000 fans.

The Allianz Arena has seen some fine football since Bayern began hosting Bundesliga fixtures at the venue ahead of the 2005/06 campaign, with the Bavarians having had an unprecedented period of domestic dominance.

Despite a stuttering start this season, Bayern will be aiming for an 11th consecutive top-flight crown in 2022/23.

Borussia Dortmund’s fanatical support is well-known across Europe, with the club’s ‘Yellow Wall’ one of the game’s most captivating sights.

The south stand of Dortmund’s Signal Iduna Park packs in almost 25,000 fans for each home game, in a spectacle of colour and sound.

#Bundesliga nights with the Yellow Wall are beyond spectacular. 🟨🌃

What was your greatest visit to @BlackYellow's Signal Iduna Park? 🏟️🙌 pic.twitter.com/JVllbCS7eK

The south stand originally held 12,000 fans, but was doubled in size soon after Dortmund’s 1997 Champions League success. It contributes to an overall capacity of 81,000, the largest in German football and one almost filled each game so far this season.

Barcelona lead the way for attendance in Europe so far this season, having hosted an average of 83,383 fans for home fixtures in 2022/23.

The Camp Nou is a cathedral among football venues, with a capacity of almost 100,000. The Spanish stadium could do with some modern renovations, but it remains one of the most iconic grounds in the game.