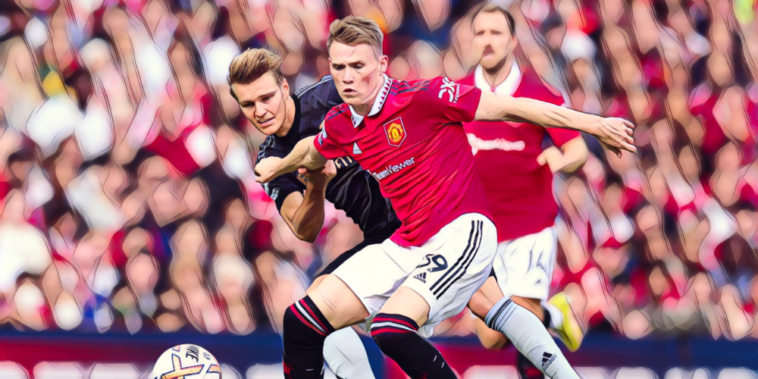 Manchester United appear to be on the rise under Erik ten Hag after a challenging start to the season, with several shoots of recovery on show in recent weeks.

United have won four straight Premier League games and five of their past six in all competitions. The Red Devils are showing signs of progress as the club continue to adapt to Ten Hag’s methods and a number of names have rediscovered their best form in recent weeks.

Here are five Manchester United players who have rediscovered their best form under Erik ten Hag.

United were linked with signing a right-back during the summer transfer window, but the club’s failure to do so has provided a lifeline to Diogo Dalot.

The 23-year-old has cemented his place in the team with Aaron Wan-Bissaka restricted to just four minutes of Premier League football and has been among the most improved players at Old Trafford this season.

Dalot arrived at the club billed as the best young full-back in Europe by Jose Mourinho in 2018, but has since struggled to live up to those expectations. However, there have been positive signs from the defender this season, with improvements in his runs, positioning and defending.

Dalot’s development defensively has been notable, adding to the attacking threat he has long carried. His cross for Bruno Fernandes’ winner at Southampton was a highlight, but perhaps more pleasing was his celebratory reaction to a recovery challenge at Leicester.

Fight for every ball 👊

Dalot roared with celebration after preventing a corner kick at the King Power Stadium, emphasising his improved desire for defending.

Wan-Bissaka’s arrival, a failed pursuit of Kieran Trippier and a loan spell at AC Milan were all moments which pointed towards the end of Dalot’s time with the club. He has bounced back to make himself undroppable at present and will hope to nail down the right-back role for the long term.

If, just a few weeks ago, you had told Manchester United fans that Scott McTominay would keep five-time Champions League winner Casemiro out of their team, you would have soon been surrounded by men in white coats.

Manchester United’s midfield malaise has been a regular talking point during the club’s decline and McTominay has received more than his fair share of the criticism. His engine room axis with Fred has seen the duo share scapegoat status, despite winning the trust of multiple managers.

Casemiro’s arrival was expected to signal the end for McTominay as a regular in the holding role, but he has instead dug deep to produce a fine run of form. The Scotland international was outstanding in the wins over Liverpool and Arsenal at Old Trafford, where his energy and combative brand of football impressed.

McTominay’s tenacity has been a tonic for Christian Eriksen’s guile in the centre of the pitch, with Casemiro forced to watch on as he waits for a chance in Ten Hag’s team.

🏴󠁧󠁢󠁳󠁣󠁴󠁿 @McTominay10 has been *everywhere* so far this season! 💪#MUFC pic.twitter.com/YpIH6mwUv9

McTominay’s performances have reached a level where he has kept out the man signed to replace him. He deserves huge credit, having rose to the challenge of Casemiro’s arrival with his best football for some time.

Marcus Rashford appears to be getting back to his best and, perhaps more crucially, enjoying his football once again.

Rashford endured a disappointing campaign in 2021/22 as he struggled for form, favour and fitness, with the impact of shoulder surgery post-Euro 2020 impacting his performances. The 24-year-old scored just four league goals last season, but has shown flashes of his finest football during the opening months of Erik ten Hag’s reign.

Clinical from the Reds on Sunday 🔥

Rashford has five goal contributions in just six Premier League appearances this season, just one less than his entire total from last season. He has impressed in a centre-forward role for the Red Devils, where his pace to stretch defences and inter-changeability with Jadon Sancho and Antony have provided a more mobile front line.

A slight knock prevented his chances of an England recall this month, but he will be in contention for the World Cup if he can maintain the levels that have seen him nominated for September’s Premier League Player-of-the-Month award.

Raphael Varane formed part of a headline transfer window last summer, one which included the arrivals of Cristiano Ronaldo and Jadon Sancho and stirred tentative talk of a title challenge.

While not quite the transformative signing hoped as injuries played their part, United were a better team with Varane in it last season and that point has been re-emphasised since the Frenchman’s return to the side.

Varane has been excellent in recent weeks and has formed a fine understanding with Lisandro Martinez. The class and composure of the four-time Champions League winner has helped to settle the summer signing from Ajax, after a Premier League baptism of fire.

This club, this team, your support !! 😍 pic.twitter.com/i4k9WxRLbn

Varane has started five fixtures this season in all competitions and has been on the winning side in each, while United have conceded just twice across that run. The 29-year-old captained France this week – keeping another clean sheet – and the Red Devils will hope he can reach the levels of his Real Madrid peak this season.

Bruno Fernandes has rediscovered his form in recent weeks with Ten Hag having made the midfielder a key part of his plans.

Fernandes has been exceptional since signing for the Red Devils from Sporting Lisbon in January 2020. He has provided 63 goals and assists in 93 league appearances and won back-to-back Sir Matt Busby Player of the Year awards in 2019/20 and 2020/21.

Last season saw a drop off in both performances and output from the Portugal international, who struggled to adapt to a new role as Cristiano Ronaldo’s arrival saw the summer signing take talisman status.

Fernandes scored a respectable ten league goals, but it was no doubt a decline from the elite levels he set when arriving at Old Trafford. Those numbers are yet to return this season – he has one goal and one assist from six games – but there has been an upturn in performance from the midfielder who has excelled when wearing the armband in Harry Maguire’s absence.

Manchester United have yet to lose a match with Bruno Fernandes as captain 💪 pic.twitter.com/mpylBMJJbB

Fernandes’ game has been less erratic and he has discussed the discipline that Ten Hag has brought to the team. His role in the Red Devils’ revival – which includes leading the Premier League for through balls – has not gone unnoticed and he is the prime candidate to become captain on a full-time basis, as Maguire struggles for form and favour under the new regime.