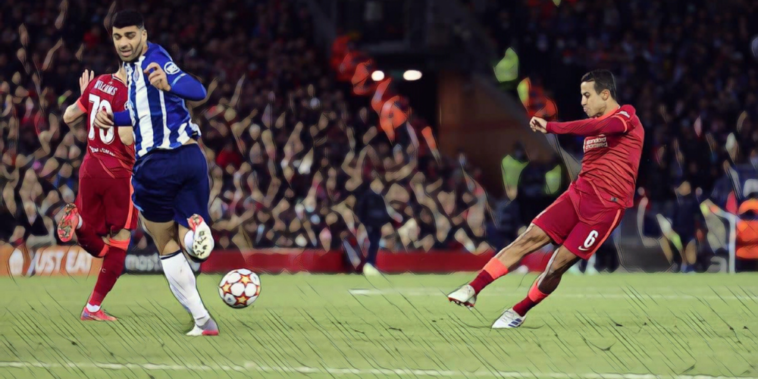 Liverpool’s 2-0 win over Porto saw midfield maestro Thiago Alcantara steal the headlines with a stunning, fizzing volley from just outside the area, the strike the latest sensational long-range effort in the Champions League this season.

There may still be a game to go in the group stages of the competition, although this year’s edition has already been blessed with a collection of belting strikes, with there still no better sign in football than a player leathering the ball into the back of the net from distance.

Here’s a look then at the club’s who have scored the most goals from outside the box in the Champions League so far this season:

While their hopes of qualification to the knockout stages have now been distinguished, Moldovan side Sheriff have been one of this year’s surprise packages, the unknown quantity having initially made a breathtaking start to the group stages with two wins from two.

After a 2-0 home win over perennial Champions League participants Shakhtar Donetsk, Sheriff followed that up with a huge shock, clinching a dramatic 2-1 win over Real Madrid at the Bernabeu.

Despite a succession of chances for the hosts, the two sides found themselves level heading into the closing stages, only for the away side to snatch a winner against the run of play through Sebastien Thill, the 27-year-old firing in an outrageous long-range effort in the final minute to secure a memorable victory.

🗣️ "It's the best and most important goal of my career, that's for sure!"

Sheriff threatened another shock after drawing level with Inter Milan at the San Siro, courtesy of a Thill free-kick, though the Italian champions recovered well to seal a 3-1 win.

That first defeat in the competition for the tournament debutants was followed by two further losses against Madrid and Inter to end any hopes of progression, although they are guaranteed third spot in the group – and a place in the Europa League – heading into the final round of fixtures.

Group C has largely been a tale of Ajax dominance, the Dutch side having won five out of five thus far, although Portuguese champions Sporting CP have upset the odds to secure second spot ahead of last season’s quarter-finalists Borussia Dortmund.

Two defeats from their opening two games had looked to have quickly curtailed any hopes of progression, before back-to-back thrashings of Besiktas revived those ambitions.

Those 4-1 and 4-0 triumphs saw Portugal international Paulinho net two stunning strikes from outside the area, first curling home a delightful effort in Istanbul to seal the win, before again adding the fourth goal of the game from distance in Lisbon.

The most recent outing saw Sporting overpower Dortmund to dump the German side out of the competition, with Pedro Goncalves bagging a brace to continue his fine form, notably curling in a delicious effort from just outside the area to put the hosts 2-0 up.

The 23-year-old – who previously made just a solitary appearance during a two-year stint with Wolves – has four goals in Europe so far this season and 11 in all competitions, adding to the 23 league goals he plundered en route to the title last season.

Bayern Munich are one of just three teams left in the competition still with a 100 per cent record – alongside Ajax and Liverpool – after navigating their way through Group E with relative ease, having scored 19 and conceded just three thus far.

While much of that damage has been inflicted by the ever-lethal Robert Lewandowski, who is currently joint-top of the scoring charts with nine goals, the Poland international has typically done much of his work inside the penalty area, notably netting an overhead kick last time out.

The club’s first outside of the box goal in the competition this season also happened to be their first goal in the group stage, Thomas Muller’s speculative effort hitting the back of the net via a helpful deflection to hand his side the lead against Barcelona at the Nou Camp.

Their second long-range strike came courtesy of Leroy Sane in the 5-0 win over Dynamo Kiev on matchday two, the former Manchester City winger seeing what looked to be an attempted cross float into the back of the net from the left flank.

The 25-year-old followed that up with a superb free-kick to put the Bundesliga giants ahead in their 4-0 thrashing of Benfica on matchday three, having been reborn under Julian Nagelsmann after a difficult start to life in Bavaria last term.

Joining Bayern in the last-16 is the competition’s most successful side Real Madrid, the 13-time European champions currently top of Group D with one game left to play, although a loss to Inter in the final round of fixtures would see them relinquish top spot.

It has largely been smooth sailing for Carlo Ancelotti’s side in Europe thus far, albeit with the notable bump in the road having come at home to Sheriff on matchday two, as they squandered a host of chances before succumbing to a late Thill wonder-strike.

After two successive wins over Shakhtar, Los Blancos exacted revenge on Sheriff last time out with a commanding 3-0 win away from home, the game seeing all three goals netted from outside the box.

Summer signing David Alaba curled in a deflected free-kick early on for just his second goal for the club in all competitions, before World Cup winner Toni Kroos swept home from just outside the area, with his effort striking the crossbar and just about dropping over the line.

The win – and progression to the last-16 for the 25th year running – was ensured just after the break as talisman Karim Benzema got in on the act, the Frenchman netting his fifth goal in the competition this season after firing in from just inside the D.

Amid all the turbulence surrounding the managerial position following Ole Gunnar Solskjaer’s departure, Manchester United secured their place in the knockout stages with a 2-0 victory over their Europa League final conquerors Villarreal.

The win over the La Liga side not only steadied the ship after a dismal recent run of results, it also ensured the Red Devils will progress as group winners, despite having endured a rocky road in the competition so far this season.

In truth, United largely have Cristiano Ronaldo to thank for that place at the top of Group F, the Portuguese icon having scored in every game in the Champions League so far this season.

After netting the first of his six goals in the opening game defeat to Young Boys, he followed that up with dramatic late winners against both Villarreal and Atalanta, before bagging his first outside of the box effort with a clinical volley to clinch a 2-2 draw in Bergamo.

The most recent outing in Spain saw the summer signing once again come up clutch to put United ahead with just over ten to play, Ronaldo lifting the ball over Geronimo Rulli in expert fashion from just outside the area.

The award for the Red Devils best strike of the competition so far, however, may have to go to full-back Alex Telles. The Brazilian rifled in on the volley from 20+ yards after a well-worked corner routine to draw the hosts level in that win over Villarreal at Old Trafford.

Six-time winners Liverpool have made light work of a potential group of death, securing their place in the last-16 with two games to spare, before continuing their winning start to the competition with a 2-0 win over Porto in matchday five.

That triumph saw the aforementioned Thiago fire in a simply exquisite half-volley into the bottom corner, scoring just his second goal for the club. The Spaniard’s effort was also the Reds’ fifth goal from outside the box in the competition this season.

The first had come in that opening game thriller with AC Milan at Anfield, captain Jordan Henderson completing a stirring comeback with a drilled second-half strike, the effort evoking memories of former teammate Steven Gerrard’s thunderbolt against Olympiakos back in 2005.

On matchday two, Roberto Firmino capitalised on some shaky goalkeeping from Porto stopper Diogo Costa to effectively pass his effort into an empty net from distance to make it 4-1, before bagging his second of the game moments later.

The Merseyside club’s other two long-range efforts came in the dramatic 3-2 win over Atletico Madrid on matchday three, Mo Salah opening the scoring with a deflected effort after making space for himself just outside the area, before Naby Keita volleyed home just moments later in superb fashion.