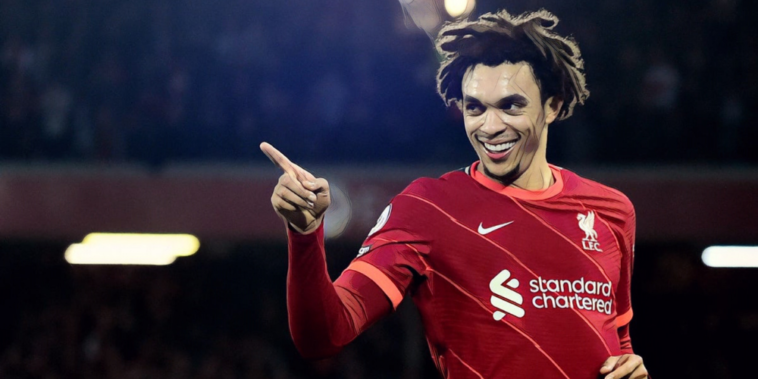 Trent Alexander-Arnold made his 150th top-flight appearance for Liverpool this week, the right-back reaching the landmark during the Reds’ 2-0 win over Leicester.

Alexander-Arnold has established himself as one of the club’s key figures since his emergence from the Liverpool academy system, setting new standards for creative output from full-back.

Still just 23, he has won both the Premier League and Champions League with the Merseysiders, in addition to being named as the PFA Young Player of the Year during the club’s 2019/20 title-winning campaign.

Following his 150th appearance for Liverpool, we look at the five youngest players to have reached the milestone mark for the club.

Tommy Smith made his debut for Liverpool after impressing Bill Shankly, the 18-year-old coming on as a substitute during a 5-1 win over Birmingham City in 1963.

It was not until two seasons later that the defender became a first-team regular, but soon cemented his place in the side and earned the nickname the ‘Anfield Iron’ for his uncompromising manner of football.

Smith made his 150th top-flight appearance aged 23 years and 137 days, edging out Steven Gerrard (23 years, 190 days) as the fifth-youngest Liverpool player to reach the landmark.

He made 638 appearances in all competitions for the Reds, winning a wealth of honours including four league titles, the European Cup and two UEFA Cup trophies.

Trent Alexander-Arnold is now fourth in the rankings after making his 150th top-flight appearance against Leicester, with the right-back having starred since his emergence in the senior side.

Alexander-Arnold has been a vital part of Liverpool’s recent successes, reaching two Champions League finals – winning the latter – and forming part of the side that ended the Reds’ 30-year wait for a league title in 2019/20.

He set a new record for most assists by a Premier League defender in a season (12) in 2018/19, before eclipsing his own landmark the following season with 13 assists.

The 23-year-old already ranks fourth for all-time assists in the division by defenders with 43, just one behind Graeme Le Saux in third and only 10 adrift of Leighton Baines’ record.

Given his prolificacy and age, it should be a record he beats by some distance.

Liverpool secured the signing of Emlyn Hughes from Blackpool in the late sixties, an investment that proved one of the club’s greatest ever purchases.

Hughes became a huge fan’s favourite across his 12 seasons on Merseyside, his infectious enthusiasm and will-to-win seeing the versatile star become captain for club and country.

He became the first Liverpool captain to lift the European Cup after the Reds’ final win over Borussia Monchengladbach in 1977.

Hughes was named as the PFA Footballer of the Year that season and captained the side to a second successive European Cup the following season, part of 13 trophies won during a glittering career at Anfield.

Robbie Fowler’s emergence was one of the most exciting of the early Premier League era, with the Toxteth-born forward rising from the ranks to enjoy an explosive start to his Liverpool career.

Having infamously hit five goals in a League Cup clash with Fulham as a teenager, he earned a regular run in the side and scored with spectacular regularity.

Fowler hit the then fastest-ever Premier League hat-trick against Arsenal, netting three times against the Gunners in under five minutes during a clash at Anfield in 1994.

Regarded as one of the Reds’ most natural goalscorers of all-time, he remains the youngest ever player to reach 50 Premier League goals after achieving the feat aged just 20 years and 252 days.

Fowler won back-to-back PFA Young Player of the Year awards in 1995 and 1996, but his career gradually declined with the forward leaving Liverpool for Leeds in 2001.

He remains the most recent Liverpool player to reach 30 goals in all competitions in three consecutive campaigns.

Liverpool’s academy system was brimming with goalscoring prospects during the nineties, with Michael Owen following Fowler from the ranks into the senior side.

Owen made a goalscoring debut for the Reds as a 17-year-old, before ending his first full season as the Premier League’s joint-leading scorer to win the division’s Golden Boot.

After starring for England at the 1998 World Cup as a teenager, he secured a second Golden Boot on his return to club action and netted 158 goals for Liverpool before moving on to Real Madrid.

Owen’s most successful season came in 2000/01 as he scored 28 goals in all competitions, including two in the FA Cup final against Arsenal as Gerard Houllier’s side won a FA Cup, League Cup and UEFA Cup treble.

He was named as winner of the Ballon d’Or in 2001 and remains the last Englishman to win the award.