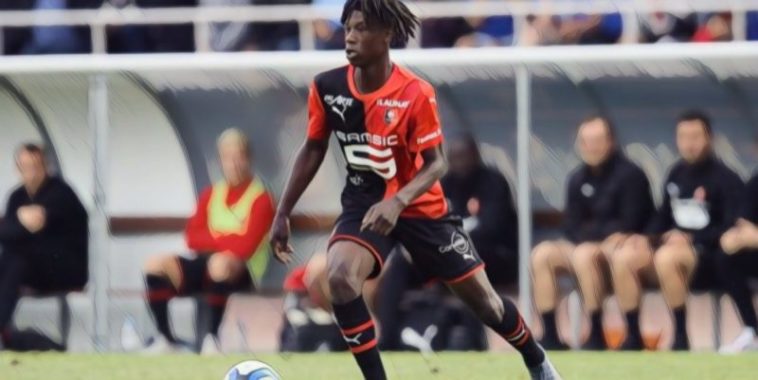 Premier League fans have been treated to regular appearances from the likes of Manchester United’s Mason Greenwood and Arsenal duo Bukayo Saka and Gabriel Martinelli, but where do that trio rank alongside the teenagers enjoying the most senior action across the continent?

Here are the five teenagers to have played the most minutes in Europe’s top five leagues:

Premier League fans unfamiliar with the talents of Alphonso Davies will have a better indication of the Canadian’s potential following a starring performance in the Champions League against Chelsea last month, the 19-year-old producing a scintillating performance as Bayern thrashed the west London side at Stamford Bridge.

The teenager made the move to Germany from MLS side Vancouver Whitecaps last year and has quickly established himself amongst the senior set-up in Bavaria, the jet-heeled winger having been utilised at left-back by the Bundesliga leaders for much of the current campaign.

Davies has made 17 league starts for Bayern this season with a further four substitute appearances, scoring once and providing a further four assists during his 1592 minutes of top-flight action.

The Canada international has also added a further four appearances and two assists in the Champions League, the youngster tipped for a huge future at one of world football’s biggest clubs.

The most established player on this list, Sancho’s precocious talents have been nurtured during three seasons at Borussia Dortmund.

Exposure to regular first-team football has seen the former Manchester City youth player develop into one of the most promising attacking players in world football, the 19-year-old starring in the Bundesliga this season scoring 14 goals and providing another 15 assists.

That tally has come in 1807 minutes of action in Germany’s top flight, Sancho remarkably averaging a goal involvement every 62.3minutes for Lucien Favre’s title challengers, whilst only Kevin De Bruyne and Thomas Muller have managed more assists across Europe’s top five leagues.

Dortmund’s faith in young talent is well documented and continues to pay dividends, Sancho one of a selection of young stars currently flourishing in front of BVB’s famed Yellow Wall.

The Swedish midfielder came through the academy ranks at Italian side Atalanta before starring on-loan at divisional rivals Parma this season, the 19-year-old playing predominantly from the right-hand side but capable of fulfilling a variety of midfield roles.

Kulusevski has started 22 of his side’s 25 Serie A fixtures this season and made one further substitute appearance, scoring five goals and providing seven assists for a Parma side enjoying a top-flight renaissance following their previous financial turmoil.

The teenager’s impressive showings have quickly caught the eye of Europe’s leading clubs, Juventus securing a deal to sign the left-footed youngster in a deal worth an initial €35m, before loaning their new addition back to Parma for the remainder of the campaign.

A name familiar to many fans due to his regular appearance in gossip columns, it seems every major club on the continent has been linked with the young midfielder in recent months – and with good reason.

The 19-year-old was called up to the senior Italy squad whilst still playing in Serie B with Brescia last season, helping the club to promotion to earn his opportunity at the highest level.

Inevitable comparisons have been made with Andrea Pirlo and it is easy to see why, both players deep-lying playmakers with distinctive hairstyles, fine set-piece takers and beginning their respective careers at Brescia.

In truth, Tonali perhaps has more strings to his bow, capable of driving forward at pace and offering more grit than the silky-skilled former Italy international.

Pirlo himself has labelled Tonali as ‘the best midfielder in Serie A’, despite Brescia’s struggles at the foot of the division. The prospect has scored once and provided five assists for the relegation-threatened side, playing 2041 minutes – the second highest of any teenager in Europe’s top five leagues.

Brescia’s season may ultimately end in a return to Serie B, though Tonali is unlikely to stick around with Europe’s giants closely monitoring his progress.

Real Madrid are amongst the clubs to be keeping a close eye on the development of teenage prodigy Eduardo Camavinga, the midfielder currently leading the Champions League chase for French side Rennes.

The Angola-born youngster would make his first-team debut as a 16-year-old in April before cementing a regular first-team position during the current campaign, playing more minutes than all but four of his teammates and producing a series of performances that could be mistaken for a senior pro.

Eduardo Camavinga compared to U21 players in Europe’s top five leagues this season:

The first player born after January 1 2002 (yes, we feel old too) to start in one of Europe’s top five leagues, Camavinga has imposed himself on fixtures against the likes of Paris Saint-Germain and Marseille this season, shielding the defence from his defensive midfield position.

Barcelona, Bayern Munich, Arsenal, Tottenham and Borussia Dortmund have also been linked with the 17-year-old who has played 2112 minutes during Rennes’ impressive Ligue 1 campaign, his maturity defying his limited experience as he continues to thrive with regular first-team minutes.