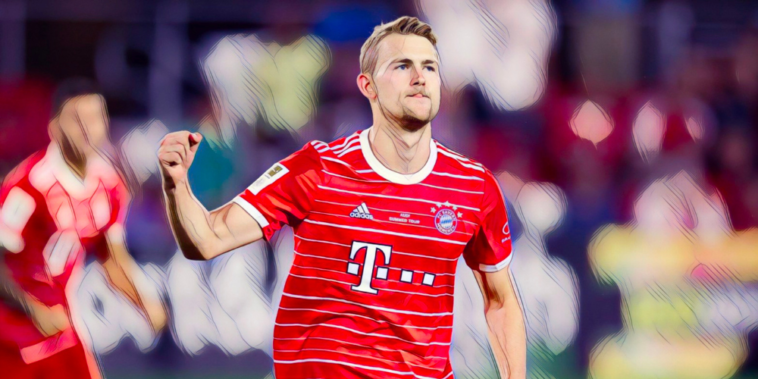 There’s been some major moves during the summer transfer window with millions of pounds traded between Europe’s elite clubs once again.

The Premier League leads the way for summer spending with the riches in English football again evident, though there has also been a number of marquee moves elsewhere on the continent.

With less than a month to go until the transfer deadline, we’ve decided to rank the five most expensive transfers of the 2022 summer transfer window so far.

Antonio Conte’s demands for backing have been answered at Tottenham this summer, with the north Londoners having embarked on a summer recruitment drive.

Conte’s arrival galvanised the squad last season and led to Champions League qualification. The club’s board have now backed the Italian in the transfer window, with six summer signings arriving at Spurs.

The most expensive of those has been the £50m arrival of Richarlison from Everton, as Spurs look to improve the quality and depth of their forward line.

Richarlison scored 53 goals in 152 appearances across four seasons at Everton and the 25-year-old has been courted by some of Europe’s top sides. His versatility in operating across the front line and willingness to chase lost causes will appeal to Conte, who has added the Brazil international to an attacking contingent featuring the talents of Harry Kane and Son Heung-Min.

Richarlison is not the only Brazil international to make a big-money move this summer, with Raphinha having departed the Premier League to sign for Barcelona.

Raphinha has excelled across two seasons at Leeds United, in which the winger provided 29 goals and assists in 65 league appearances.

The 25-year-old shone despite Leeds’ fight against relegation last season and his performances have earned him a £50m move to the Camp Nou.

Raphinha owes it all to Marcelo Bielsa 🥺❤️ pic.twitter.com/p5PPoRBWFp

Raphinha will hope to follow in a long lineage of Brazilian talents to have impressed in Catalonia, as he looks to stake his claim for a starting spot in the Selecao’s World Cup squad.

Erling Haaland’s name has dominated the gossip pages in recent campaigns and the forward has been linked with each of Europe’s richest clubs since his stunning emergence.

That fee represents a potential bargain given his goalscoring exploits in recent campaigns, with the 22-year-old having scored 115 goals in 116 appearances across spells at Red Bull Salzburg and Dortmund.

Despite having not operated with an out-and-out number nine for much of the past two campaigns, Pep Guardiola will hope the signing of Haaland can continue City’s domestic dominance and lead to an elusive Champions League title.

After being pipped to the Premier League title last season, Liverpool have countered Manchester City’s signing of Haaland with a £64m move for Darwin Nunez.

Nunez catapulted himself into the consciousness of leading sides with a 34-goal campaign for Benfica last season, a haul which included scoring against Liverpool in the Champions League and one that earned the 23-year-old the Primeira Liga Player of the Year and Top Scorer awards.

Liverpool’s deal could reach a club-record £85m with add-ons and Nunez will offer a different profile of forward to Jurgen Klopp’s side, one which has operated without a traditional number nine for much of the German’s reign.

After a four-goal haul in a friendly win over RB Leipzig last month and a goal off the bench in the Reds’ Community Shield win at Wembley, the hope on Merseyside will be that the Uruguayan can hit the ground running when the Premier League resumes.

Bayern Munich have rebuilt ahead of the new campaign following a disappointing performance in the Champions League last season, with Matthijs de Ligt’s £68m arrival the most expensive of the club’s four summer signings.

De Ligt joins Sadio Mane, Ryan Gravenberch and Noussair Mazraoui in moving to the Bundesliga champions, having made 117 appearances across his three seasons at Juventus.

The Netherlands international is viewed as one of the best young centre-backs in world football and believes Julian Nagelsmann’s high intensity brand of football is suited to his strengths.

“First of all, the club,” he told ESPN when discussing his reasons for joining.

“The board showed me they really wanted me, that says a lot because it’s important for me. The club suits me: attacking football, hard training, high intensity. That’s what I’m looking for.

“I knew about the coach [Julian Nagelsmann] before because he’s a famous coach in the football world. I know how he plays and that he’s really good in training young players. That’s good, but the most important thing was the confidence that the club had in me.”

Aurelien Tchouameni is the most expensive signing of the summer transfer window so far after completing an £80m move to Real Madrid.

The European champions have bolstered their midfield with the signing of Tchouameni, beating off competition from Liverpool and Paris Saint-Germain to land the Monaco midfielder.

Tchouameni has established himself as one of the most promising talents in Ligue 1 across the past two campaigns, having earned inclusion in the league’s Team of the Season in successive seasons.

🤍 A new generation of midfielders to dream about, @realmadriden fans… 💫

The 22-year-old was also named as the division’s Young Player of the Season in 2020/21 following a breakthrough season, having ranked second in Ligue 1 for tackles won.

Already established at international level with 12 caps for France since making his debut last September, he arrives to compete with the silverware-winning axis of Casemiro, Luka Modric and Toni Kroos in Carlo Ancelotti’s side.