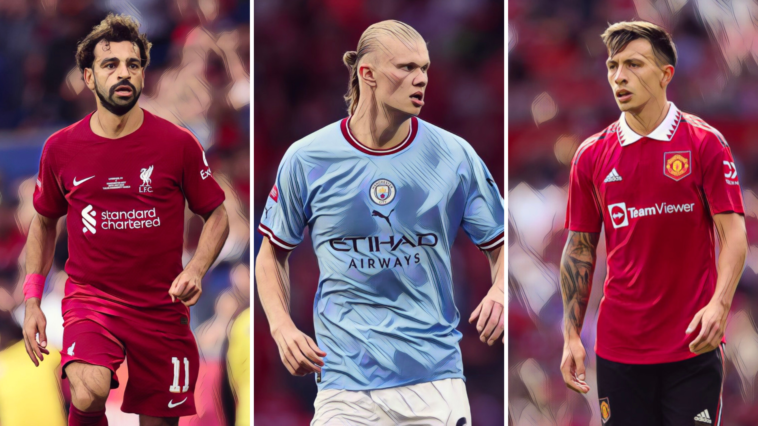 Premier League football makes its much-anticipated return this weekend with the opening fixtures of the 2022/23 campaign.

A new season brings new hope and expectation across the Premier League, with Manchester City the defending champions and looking to continue their recent dominance of the division.

Liverpool are expected to pose the biggest threat to Pep Guardiola’s side, though the likes of Chelsea, Tottenham, Arsenal and Manchester United will all be looking for marked improvement in their bid to challenge at the top end of the division.

Elsewhere, West Ham, Newcastle and Aston Villa have all made eye-catching additions, while Nottingham Forest return to the Premier League for the first time in 23 years

Ahead of the season’s kick-off, we preview each of the 20 Premier League sides. Here is part two, including all sides alphabetically from Leicester to Wolves.

After finishing fifth in consecutive campaigns, last season was one of regression for Leicester despite the entertainment of a run to the Europa Conference League semi-finals.

An eighth-placed finish papered over the cracks of a disappointing domestic campaign, in which poor defending, inconsistent form, and injury problems prevented a genuine push for European qualification.

Leicester are the only team in the division to have not made a signing this summer and much of the remainder of the transfer window will be focused on potential exits.

No way through ⛔@Wesley_Fofanaa wasn't going to give up the clean sheet in #LeiSev 👊 pic.twitter.com/xFM95zcEyY

Youri Tielemans has entered the final 12 months of his deal and has been linked with Arsenal, while James Maddison (Newcastle) and Wesley Fofana (Chelsea) are subject of interest from Premier League rivals.

If Brendan Rodgers can keep the core of his team together, the absence of European football could aid Leicester’s push to return to continental competition next season.

The loss of Tielemans, Fofana or Maddison would be sizeable however, while the exits of two or three would leave a late (and unlikely) dash to find replacements of sufficient quality.

For the second time in four seasons Liverpool missed out on the title by just a single point, following Manchester City’s thrilling comeback win on the final day of the season.

For all the talk of an unprecedented quadruple, the Reds’ end to the season contained disappointment with their title agony and defeat to Real Madrid in the Champions League final.

Jurgen Klopp’s side are geared for another assault on the major trophies and have evolved over the summer. Darwin Nunez will provide a different profile in attack and impressed off the bench in the Community Shield, though the departure of Sadio Mane is a significant void the Uruguayan will attempt to fill.

As ever, Mohamed Salah will be central to the Reds’ hopes of success. The Egyptian finished as the leading goalscorer (joint) and assist provider in the Premier League last season. After ending speculation over his future with a new deal, he is primed for another prolific season around goal.

A fourth title in five seasons underlined the domestic dominance of Pep Guardiola’s side, who will be bidding to become just the second team (after Manchester United 1999-2001 and 2007-2009) to win the Premier League in three consecutive campaigns.

City have, whilst bringing in a profit, arguably improved from last season. Erling Haaland is the arrival that has most captured the attention and points to a shift in style from the champions, who have operated without a recognised centre-forward for much of the past two campaigns.

Haaland’s arrival will add a new layer of potency to the champions who, despite perceptions over wayward finishing on occasion, outperformed their xG (expected goals) figure in the Premier League last season.

Rival fans have been quick to jump on a wasteful performance from the Norwegian in the Community Shield, but make no mistake City remain the team to beat this season.

Favourites for the title and with good reason, Guardiola’s team are also geared up for another crack at an elusive Champions League title.

It proved a miserable season on the red half of Manchester last time around. As rivals City celebrated another championship, a disconsolate fanbase were left reflecting on the remarkable swing in fortunes between United and their cross-town neighbours across the past decade.

Ole Gunnar Solskjaer’s reign was brought to an end in November, with the appointment of Ralf Rangnick a left-field appointment that was akin to putting a plaster on a gunshot wound.

Erik ten Hag’s arrival has breathed cautious optimism back into the club and the Red Devils’ pre-season showings have been encouraging, with the likes of Anthony Martial and Jadon Sancho among those to have shown promising signs.

August = the start of the new season.

Bringing the best from Bruno Fernandes should be a focus for Ten Hag, after the midfielder struggled to adapt to a changed role last season as Cristiano Ronaldo commanded centre stage.

The circus surrounding Ronaldo’s future has also been an unwanted distraction, but Ten Hag should, at the very least, provide a brand of football that the supporters can relate to.

After almost a decade in the wilderness, a positive direction is all the fans can ask for at present.

A season of two halves for Newcastle in 2021/22. The Magpies became the first team in the Premier League era to survive after failing to win in their opening 14 games, as Eddie Howe – backed by a new regime with cash to spend – oversaw a transformation of the side.

Howe’s signings in the winter window were impressive and made an immediate impact, though Newcastle have so far resisted temptation to spend huge amounts of their Saudi owners cash this summer.

Upgrades in key areas have arrived with Nick Pope and Sven Botman set to improve their solidity, while Matt Targett’s loan from Aston Villa has been turned into a permanent deal.

🗣 "It's great to feel this atmosphere and to play here."

More impressive was Howe’s improvement of current personnel, with a revitalised Joelinton claiming Newcastle’s Player of the Season award after being reinvented in central midfield. The Brazilian’s partnership with compatriot Bruno Guimarães can provide the platform for a strong season, while an improved £50m bid to James Maddison suggests there might be a marquee arrival before the window slams shut.

Nottingham Forest are back in the Premier League after a 23-year absence, with Steve Cooper having overseen an incredible transformation of the side.

Forest were bottom of the division after losing six and drawing one of their opening seven games, but Cooper’s arrival in late September led to a resurgence that ended with Premier League promotion.

Forest also reached the FA Cup quarter-finals – beating Arsenal and Leicester in the process – and a raucous City Ground will not be a trip any side relishes in 2021/22.

🤑 Forest are keen to stay up!

Brennan Johnson ignored interest from rival sides to pen a new deal and the 21-year-old, who scored 19 goals and provided 10 assists last season to be named as EFL Young Player of the Season – will be looked towards for inspiration.

It’s been a busy summer of recruitment for Forest who have brought in 12 new faces, the most notable the captures of Dean Henderson (loan) and Jesse Lingard. Taiwo Awoniyi, who scored 20 goals in all competitions for Union Berlin last season, has been tasked with scoring the goals to secure safety.

Southampton have stagnated since the progressive period under Mauricio Pochettino and Ronald Koeman, with the Saints having finished higher than 15th in just one of the past five campaigns.

Ralph Hasenhuttl remains highly rated and implements a brand of football that – when on song – can lead to inspired performances, but Southampton remain frustratingly inconsistent and prone to capitulation.

Ready for the season 🦁 @SouthamptonFC pic.twitter.com/MwKasSW6HU

After hovering above the relegation places in recent campaigns, could this be the season that the Saints are dragged into the bottom three? James Ward-Prowse remains a cut above most midfielders outside the Premier League’s ‘big six’ clubs, but there is little match-winning quality elsewhere.

Hasenhuttl has again looked towards youth with his summer recruitment, with just one of Southampton’s five summer signings over the age of 20.

After winning just one of their final 12 games last season, the Saints need a strong start to avoid a relegation battle this time around.

Antonio Conte’s demands have been answered with backing in the summer transfer window, bringing in six new signings as Spurs prepare to return to the Champions League.

Conte’s arrival galvanised the north Londoners following the failed experiment of Nuno Espirito Santo and, despite occasional outbursts of frustration, the Italian seems to have bought into the project for now.

The 53-year-old is a serial winner and one of world football’s leading coaches, with the secret to keeping Conte content ensuring that he believes Spurs are capable of challenging for major honours.

The arrivals of Richarlison and Yves Bissouma are improvements in depth and quality, adding to the impressive signings of Rodrigo Bentancur and Dejan Kulusevski in January.

Having added strength in depth and with a full pre-season of Conte’s methods behind them, Spurs – who will be built around the world-class talent of Harry Kane and Son Heung-Min – will hope to take a huge step closer to the division’s top two.

David Moyes continues to have West Ham performing above all expectations, with the Hammers having largely made a mockery of those who suggested a drop-off in performances would come as a result of juggling European commitments.

West Ham again emerged as the strongest challengers to the Premier League’s ‘big six’, securing another season of continental football in addition to reaching the Europa League semi-finals.

Nayef Aguerd and Gianluca Scamacca are big-money arrivals who will strengthen the spine of the side, the latter a particularly impressive addition given he was courted by the likes of Paris Saint-Germain.

Scamacca, who scored 16 league goals in Serie A last season, has been likened to Zlatan Ibrahimovic and the 6ft 5in forward looks tailor-made for West Ham as the club look to ease the burden on Michail Antonio.

Moyes will hope Flynn Downes can be another shrewd signing from the second tier and the midfielder could partner the ever-improving Declan Rice, who will captain the club this season and remain at the London Stadium for another campaign at least despite admirers from England’s elite.

Last season was one of transition for Wolves as Bruno Lage replaced Nuno Espirito Santo, with hopes that the new boss would bring an attacking brand of football failing to materialise.

Wolves competed for a place in Europe for much of the season, but their challenge was built on the defensive solidity – alongside heroics from summer signing Jose Sa in goal – that defined the tenure of Lage’s predecessor.

Wolves boasted the best defensive outside the top four, but a lack of goals proved problematic. Raul Jimenez top scored with just six and it is a statistic that must improve if the club are to not regress this season.

Their lack of firepower contributed to a late-season slump and fall down the table. The return of Pedo Neto – who has impressed in pre-season after a lengthy spell out injured – should aid their pursuit of creativity.