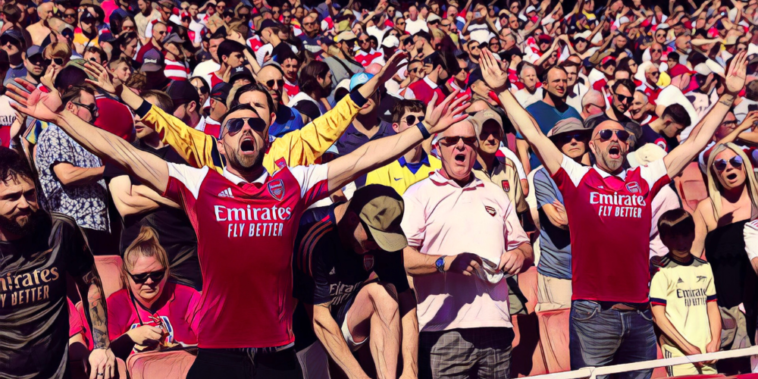 Premier League tickets are always in high demand, and unless you are a season ticket holder they can often be difficult to acquire.

However, there are options to buy tickets for a single game from third-party websites. Our friends over at Ticket Compare recently did a study to find out which 22/23 Premier League games are the most expensive to buy a ticket for.

With that in mind, let’s check out what the five most expensive Premier League games are this season…

A final day trip to Southampton is priced on average at £806 among the online sellers checked, with the hope that the Reds could again be involved in the title race during the season’s final stages.

Last season the Premier League title race went to the final day for the second time in four campaigns, with Liverpool missing out to Manchester City following a dramatic day of action.

Liverpool’s final home fixture of the campaign is the fourth most expensive ticket of the 2022/23 season, averaging at £833 across the online sellers compared.

The fixture will see Steven Gerrard make his latest return to the club he once served as captain, while the Liverpool players will also embark on the traditional lap of honour to send thanks for the season’s support.

More optimistic fans will hope the final Anfield fixture of the campaign could even see the presentation of the Premier League trophy, though last season’s runners-up will need to markedly improve after beginning the season winless in three games.

Fans planning to bring in the New Year with Premier League football on the South Coast will have to spend to do so, with Brighton vs Arsenal containing an average price of £840 among the online sellers.

The two teams have formed an unusual and unexpected rivalry in recent campaigns, following the memorable altercation between Neal Maupay and Matteo Guendouzi in 2020.

Guendouzi never featured again for Arsenal and Maupay could well leave Brighton before next week’s transfer deadline, but Graham Potter’s improving Seagulls will no doubt relish the chance to take on the Gunners in their final fixture of 2022.

Ranked second among the Premier League’s most expensive games of 2022/23 is Newcastle vs Arsenal.

Both teams appear on the rise during the season’s opening weeks with Arsenal top of the division with the Premier League’s only perfect record.

Newcastle are also unbeaten after holding Manchester City to a 3-3 draw last weekend and both sides will be hoping to be among the European places come their meeting on May 6th.

Arsenal’s push for Champions League football unravelled at St James’ Park last season and Mikel Arteta will be keen to avoid a repeat.

The most expensive Premier League ticket of the 2022/23 campaign is Leicester vs Liverpool. The price is somewhat skewed given just two online sellers have stated price points, but Brendan Rodgers’ clash with his old side has a staggering average of £1348.

Both sides have struggled during the season’s opening weeks and will demand improvement after the success of recent campaigns.

Five teams failed to win any of their first three Premier League games this season:

Jürgen Klopp was not expecting to be a part of that list. 😬 pic.twitter.com/zBoat2jIbX

Leicester have won the past two meetings between the teams at the King Power Stadium, including a 1-0 win in December 2021. That defeat was one of just two suffered by Jurgen Klopp’s team last season, as the Reds finished as runners-up in the Premier League.