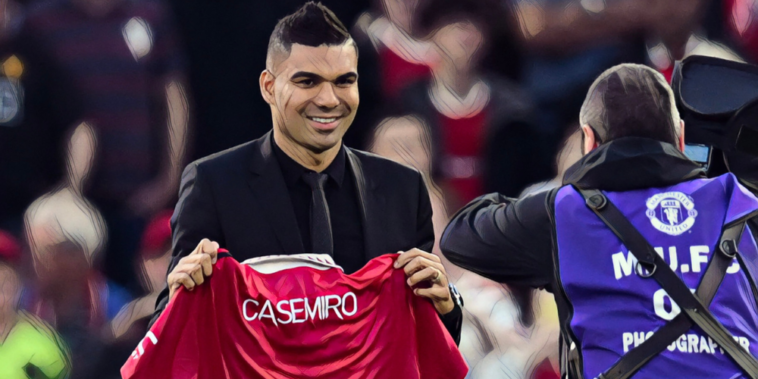 Casemiro has outlined his ambition to win the Premier League at Manchester United following his move to Old Trafford.

The Brazilian midfielder was introduced on the pitch ahead of United’s 2-1 win over Liverpool on Monday evening as the club’s fans were given a first glimpse of the marquee arrival from Real Madrid.

The 30-year-old arrives after a decorated career at Real Madrid, in which he won five Champions League winners’ medals and three league title. Speaking at a farewell press conference on Monday before travelling to Manchester, the midfielder outlined his intention to continue winning major trophies at Old Trafford.

“It’s a club with great history, I will have to work hard to make a name for myself because there, I have won nothing yet. At Manchester United, first of all, what I want is to transmit the way I feel about the club, my respect.

“Everything I did here [at Real] I want to do there, too.

“I want to show my fighting spirit, capacity to work hard and professional attitude. I want to win the league. I am going through one of the best moments of my career. I feel I’m really fit, mentally I feel great, and I want to continue to enjoy. It’s a great moment to take this decision.”

Casemiro’s deal will make him one of the highest-paid players at United, but the new arrival has dismissed suggestions he has moved for money and insists now is the right time to take on a new challenge.

“Those who think I’m leaving for money is because they don’t know me. At the end of the Champions League final [when Real beat Liverpool in May] I had the feeling that my cycle was over. After the holidays, with a clear head, the feeling was the same.

“It wasn’t that fast [a decision]. I already spoke with the club as soon as the Champions League finished. People: don’t forget the club I’m going to [is] the biggest team in the world and that can compete with the greatness of Real Madrid, although now it doesn’t.”