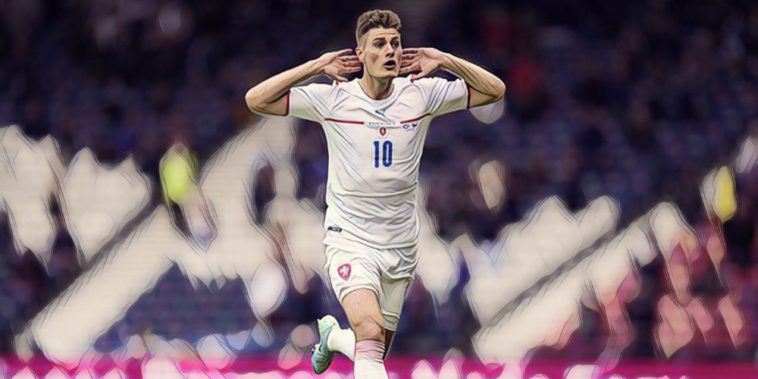 Major tournaments always provide an opportunity for players to put themselves in the shop window and Euro 2020 saw Patrik Schick gain plenty of attention.

Schick finished as the joint-leading scorer – alongside Cristiano Ronaldo – at the European Championship, netting five of the Czech Republic’s six goals on their way to the quarter-finals.

The forward’s goalscoring exploits have led to predictable transfer rumours surrounding his future, with a number of Premier League sides reportedly monitoring the Bayer Leverkusen star.

With transfer business expected to accelerate as we approach the end of the window, interest in  Schick’s signature is starting to heat up.

So for those of you interested in the best exchange betting sites, we take a look at the Bookies favourites to sign the highly-rated frontman this summer.

Brighton have been priced at 20/1 odds to sign the Czech Republic international this summer, with Graham Potter keen to reinforce his forward line with the signing of a new number nine.

The Seagulls won admirers for their attacking style of football last season despite flirting with relegation, a lack of goals preventing a more comfortable campaign with Brighton far underperforming in terms of xG.

Only four teams scored less than Brighton’s 40 goals last season, despite the Seagulls compiling an expected goals figure of 51.6 – the 11th highest in the Premier League.

The signing of Schick would go some way to helping Brighton correct their exasperating habit of spurning opportunities and failing to turn dominance into points, the 25-year-old boasting almost identical goals and xG figures after scoring nine Bundesliga goals in 20 starts for Leverkusen in 2020/21.

Another side seeking reinforcements at centre-forward, West Ham’s sixth-place finish and securing of continental qualification came despite spending much of the season without a recognised striker.

Michail Antonio’s injury issues saw the likes of Jarrod Bowen and Jesse Lingard share forward duties, with David Moyes now understood to be keen on adding an established number nine to his ranks ahead of the 2021/22 campaign.

Schick would help alleviate some of the burden on Antonio with the Hammers set for an increased number of games given their Europa League participation, whilst the forward’s link-play and aerial prowess seems suited to the style Moyes has implemented at the London Stadium.

West Ham are yet to replace Sebastien Haller after cutting their losses on the club-record signing in January and Schick could prove to be a fine addition if he can replicate his Euro 2020 performances on a consistent basis.

With fellow Czechs Tomas Soucek and Vladimir Coufal enjoying huge success after arriving in recent windows, the Hammers could be keen on adding a third ‘Czech mate’ to their new fan favourites.

Tottenham have been credited with making enquiries into Schick’s availability this summer, with the north London side in the process of rebuilding under new manager Nuno Espirito Santo.

Carlos Vinicius underwhelming loan spell last term has seen the forward return to Benfica, leaving Spurs without recognised cover for Harry Kane – whose own future is uncertain after expressing a desire to leave.

Manchester City have seen one offer already rejected for the England captain and the signing of a new forward shapes as a huge priority for Spurs before the closure of the window.

Southampton’s Danny Ings and Chelsea’s Tammy Abraham are two names linked with the club of late, though Schick could be an addition that really excites the fans following his performances this summer.

Aston Villa have been ranked as 8/1 second favourites to sign Schick, with the club’s ambitious ownership have shown a willingness to invest in the side in recent transfer windows.

Dean Smith has overseen impressive progress since guiding the club back into the Premier League, with Villa pushing towards the European places last season before stuttering towards the end of the campaign.

Villa have been linked with various centre-forward additions in a bid to alleviate the pressure on Ollie Watkins, who starred following his £28m arrival from Brentford last summer with 16 goals in all competitions.

Ranked at 6/1, Liverpool are the bookmakers’ favourites to sign Schick from Leverkusen.

Jurgen Klopp is keen to add to his forward options with the Reds lacking depth beyond their first-choice front three, whilst the Africa Cup of Nations provides a selection headache with both Sadio Mane and Mohamed Salah set to miss a period of the 2021/22 campaign.

Liverpool have largely operated without a recognised number nine, with the arrival of Schick – both mobile and physical – potentially providing a different option to the false nine system often used with Roberto Firmino.

Tournament performances should be taken with caution as Liverpool know only too well, but Schick has the quality and attributes to become a success in the Premier League.

The 2020/21 season saw Liverpool put more crosses into the penalty area than any other side in the division, a source of ammunition that could see Schick thrive with the forward ranking in the 89th percentile for aerial duels won in the Bundesliga last season.