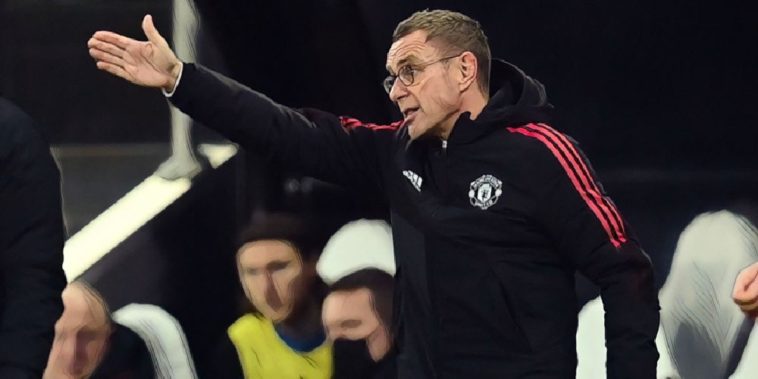 Ralf Rangnick has discussed Manchester United’s form, motivation and inability to sustain their performances as the club prepare to take on Norwich in the Premier League this weekend.

United have won just one of their last five Premier League fixtures to drop to seventh in the division, six points behind fourth-placed Tottenham in the race for Champions League qualification.

The Red Devils produced a poor performance to lose 1-0 at struggling Everton last weekend and Rangnick has opened up on the side’s struggle for consistent results.

The interim boss believes United have ‘had moments’ but admitted his disappointment that the club have been unable to sustain their promising performances.

“We’ve had moments when we’ve played well,” he told his pre-match press conference.

“I think we’ve had quite a few games where we really played well in the way that we played together as a team. But what we haven’t done [so far] is do it in a sustainable way and over a longer period of time, and I’m disappointed about that.”

Rangnick was asked whether his side lacked motivation, given the difficult task to reach the top four and confirmation of a fifth consecutive season without silverware.

“It shouldn’t be a problem at a club like United,” he said. “The players at United should always have a level of internal motivation.”

Rangnick suggested that injuries and absences had played a part in the side’s lack of consistency, but conceded that his team have not performed at their best for a sustained period of time.

“I can imagine what the reasons are. Without using it as an excuse, we have lost a few players since the West Ham game, for example, we lost three of our strikers, who were all part of that game and part of that last second goal that we scored.

“Right now, we are missing quite a few others players with Fred and McTominay, our two defensive midfielders, so this is probably one reason, but in total, it’s that we’re not sustainably playing at the highest possible level.”

Rangnick confirmed a number of absences ahead of the clash with the Canaries, with midfield duo Fred and Scott McTominay out. Raphael Varane will also miss the fixture, alongside both Luke Shaw and Edinson Cavani.

Shaw missed last weekend’s defeat at Everton after being forced off at half-time during the 1-1 draw with Leicester earlier this month, with the left-back having since undergone surgery to remove the bolts inserted into his leg after he sustained a double leg-break in 2015.

The England international is currently recovering, though Rangnick doubted whether Shaw would return before the end of the season.

“As it seems, he will be out for another at least four weeks, if not five weeks, so I think for him it will be difficult to be available for one of the remaining seven games.”