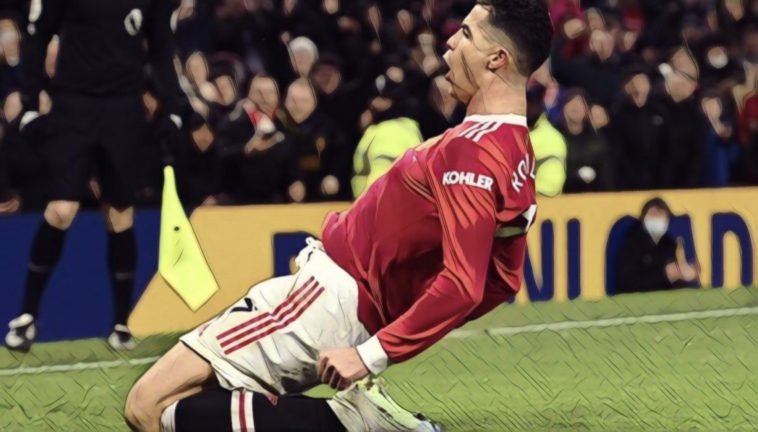 Manchester United got their bid to finish in the top four back on track tonight by beating 10-man Brighton 2-0 at Old Trafford.

Both side would have clear cut chances to take the lead within the first six minutes, but first Brighton’s Jakub Moder and then Man United’s Jadon Sancho both fired straight at the goalkeeper after finding themselves clean through on goal.

Old Trafford is far from the fortress it once was and as the game began to settle it became clear that Graeme Potter’s side looked by far the more confident and threatening when in possession.

United once again had David de Gea to thank for keeping the scores even, with the Spanish keeper pulling off a brilliant stop to deny Moder’s powerful header.

A super David De Gea save from Jakub Moder’s header the highlight, as the score remains goalless at the break#MUNBHA pic.twitter.com/8lAz3HNLI9

Portuguese superstar Cristiano Ronaldo had been poor throughout the first-half, having come into the game without a goal since December. However, in the 51st minute the 37-year-old would prove the old adage that form is temporary, class is permanent when he drove forward to the edge of the box, beat a couple of men and fired a ferocious strike low into the bottom corner.

Just a few minutes later and United’s chances of winning seemed to increase even further when Brighton skipper Lewis Dunk was shown a red card for hauling down Anthony Elanga – even though replays seemed to suggest that Adam Webster would have made it back in time to prevent it from being a clear goal scoring opportunity.

Ronaldo would twice miss the chance to extend his sides lead and as the game went on tension began to rise in the home support having twice seen their team blow a one nil lead over the last week.

Those nerves seemed justified when the lively Moder finally did beat de Gea, only for the Poland international to see his long range effort cannon off the bar.

Former Red Devils striker Danny Welbeck would then come off the bench and head a glorious chance wide from six yards out. However, as the 10 men pushed forward they left themselves open at the back and in the seventh minute of injury time a breakaway goal from Bruno Fernandes would see United seal a much needed three points.

Speaking afterwards United’s interim coach Ralf Rangnick seemed well aware of his sides problem with stringing together a 90 minute performance, while accepting that getting over the line and securing the win was vital.

“First half was Mr Hyde, second half Dr Jekyll and for a change it (the result) was different. In the end it was important to get the three points against an in form team,” Rangnick told BT Sport.

”Brighton are very possession based, full of confidence and we had to take more risks in the second half, it paid off. We scored the goal and got the red card for Lewis Dunk with a brilliant interception from Anthony Elanga.

“We realised that they had too often possession of the ball and could only intercept in few situations. Should we change to a formation to back three?

United had been booed off at half-time and Rangnick admitted he understood the home crowd’s frustration.

”In the first 10 minutes of the second half we had more success moments and it raised the crowd, they were not moaning and were getting behind the team. I can understand if it feels to them like Brighton have 60% possession, that is not what they want to see.”

Next up for United is an away clash with bitter rivals Leeds United next Sunday.