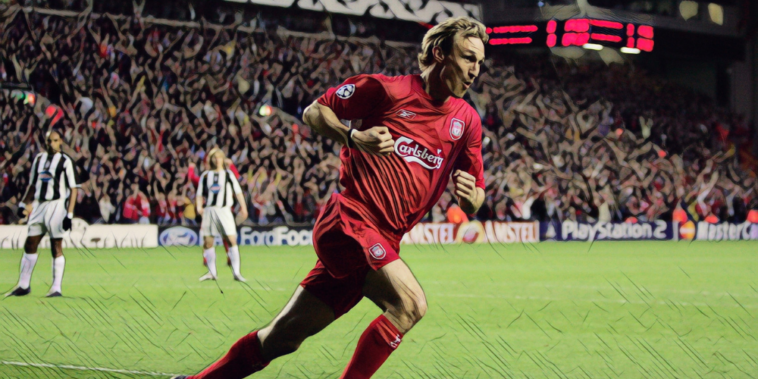 Liverpool travel to face Inter Milan in the first leg of their Champions League last-16 tie on Wednesday evening, a clash between two of Europe’s biggest clubs at the San Siro.

Jurgen Klopp is seeking to reach a third Champions League final with the Reds, though the 2019 winners have been given a difficult challenge against the Italian champions in the first knockout round.

Liverpool have enjoyed some memorable clashes with Serie A sides in continental competition and their two-legged tie with Inter Milan promises to be another fascinating encounter.

Ahead of the first leg, we look back at five of Liverpool’s best wins against Italian opponents during the Champions League era.

Liverpool faced Roma in their final fixture of the 2001/02 second group stage, needing to win by two clear goals against the Serie A champions to progress to the quarter-finals.

Roma arrived with a star-studded side that included the likes of Gabriel Batistuta, Francesco Totti and Cafu, with the Italians under the management of Fabio Capello.

On an emotional evening that saw Gerard Houllier – against doctor’s advice – return to the touchline for the first time since having life-saving heart surgery five months earlier, Liverpool secured a crucial 2-0 win to book their place in the last eight.

The Frenchman was greeted with a rapturous welcome from the home crowd upon his arrival in the dugout, with an atmospheric Anfield providing the backdrop to a memorable win.

"It was one of the best nights" ❤️

On what would have been his 74th birthday, we remember Gerard Houllier's emotional Roma return at Anfield: pic.twitter.com/raPphMzgRi

Jari Litmanen opened the scoring from the penalty spot after just six minutes to get the Reds off to a perfect start on Merseyside, before Emile Heskey rose to meet Danny Murphy’s free-kick and head home the crucial second.

Few expected Liverpool to pose much of a threat during the Champions League’s knockout rounds in 2004/05, but Rafael Benitez’s side upset the odds to progress to the latter stages.

The Reds were underdogs ahead of the visit of Juventus in the quarter-finals, but a side containing a teenage Scott Carson in goal and the unheralded talents of Djimi Traore, Igor Biscan and Anthony Le Tallec produced a fine performance to earn a first leg win over the Turin giants.

The Spaniard lashed a bouncing ball up and over Gianluigi Buffon from distance and Liverpool hung on to secure the win despite Fabio Cannavaro’s header reducing the deficit.

A goalless draw in the return saw Liverpool progress to the semi-finals as Benitez’s side eliminated one of the tournament favourites.

Arguably the greatest individual night in Liverpool’s long history and the most dramatic Champions League final of all time.

Liverpool came from three goals down to take AC Milan to penalties in Istanbul, with Jerzy Dudek’s shootout heroics crowning the Reds as European champions for a fifth time.

AC Milan were the strong favourites and had won the trophy two seasons earlier, a stellar side racing into a comfortable half-time advantage through Paulo Maldini’s goal – the fastest ever in a Champions League final after just 50 seconds – and Hernan Crespo’s brace.

Down and seemingly out at the break, a sensational seven-minute spell transformed the tie as Liverpool fought back at the Atatürk Stadium.

⏪ 2005: THAT Liverpool comeback against AC Milan in in Istanbul… @LFC | #UCLdraw pic.twitter.com/yHm3QtTGTH

Liverpool rode their luck – including a sublime double save from Dudek to deny Andriy Shevchenko in extra time – to reach penalties, with Dudek’s decisive save from Shevchenko sparking wild celebrations in Turkey.

The late 2000s saw Liverpool become regulars in the Champions League’s latter stages, with Rafael Benitez having turned the Reds into a competitive force among Europe’s elite.

Having reached a second final in just three seasons during the previous campaign, Liverpool were again looked to progress to the business end of the Champions League and met Inter Milan in the last 16.

The Nerazzurri had emerged as Serie A’s dominant force in the wake of the Calciopoli scandal and had won the past two league titles in Italy, but were beaten over both legs as Liverpool reached the last eight.

Having secured a 2-0 win courtesy of two late goals at Anfield, the Reds kept another clean sheet to secure a hard-fought win at the San Siro.

THAT TURN + THAT FINISH = 🔥🔥🔥#OnThisDay in 2008, @Torres silenced the San Siro… pic.twitter.com/nDLkEIhQBu

Fernando Torres – in the midst of an impressive first season with Liverpool – bagged the game’s only goal, scoring brilliantly on the turn to seal a comfortable aggregate victory for the visitors.

Champions League semi-finals can often be cagey affairs, but Liverpool ripped up the script to dismantle Roma in a ruthless performance during the 2017/18 season.

Having beaten Manchester City courtesy of a blitz of Anfield goals in the quarter-finals, the Reds repeated the trick to score five times inside the opening 68 minutes on Merseyside.

Mohamed Salah was in scintillating form against his former side, scoring twice – his 42nd and 43rd goals of a sublime first season with the club – and creating two more as Liverpool ran riot.

Roberto Firmino also scored twice for the home side, with Sadio Mane netting the third of the evening as Jurgen Klopp’s side secured a commanding first-leg advantage.

Late goals from Edin Dzeko and Diego Perotti added some respect to the scoreline for Roma, who were unable to prevent Liverpool’s progress to the final despite winning another entertaining contest in the return.

The damage had been done in the first meeting in a performance that truly announced Salah as a star on the Champions League stage.