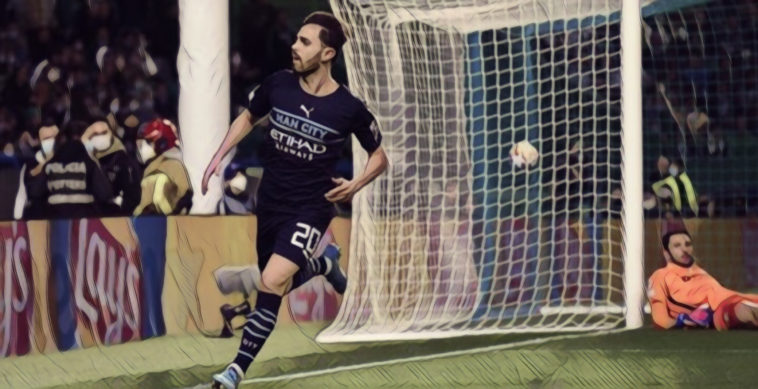 Manchester City effectively secured their place in the Champions League quarter-finals after hammering FC Sporting 5-0 tonight in Lisbon, in their last 16 first-leg tie.

The runaway Premier League leaders began the rout on seven minutes when Riyad Mahrez fired a Kevin De Bruyne pullback into an empty net from six yard’s out.

On 17 minutes Portuguese international Bernardo Silva slammed a superb half-volley into the roof of the net, before Mahrez turned provider for Phil Foden who slotted home the Algerian’s delivery from close-range to make it three.

Before half-time City effectively killed the tie all-together, when Silva’s deflected effort ended up in the back of the Sporting goal.

The Citizens would complete the scoring on 58 minutes through Raheem Sterling, and it seems the prolific attacker saved the best for last.

Unstoppable? Manchester City have scored five goals or more for the third time this season…

Sterling picked the ball up 25-yards-out before curling an unstoppable strike into the top corner to seal an emphatic win for Pep Guardiola’s side.

Speaking afterwards Guardiola praised his sides clinical edge, while he also showed his perfectionist tendencies by insisting his team can play even better.

”The difference between the two teams is not 5-0 but we were so clinical. We punished them,” Guardiola told BT Sport.

“There is one rule in football when you have the ball and that’s not to lose it. We had some simple passes that we lost. Against the top sides in Europe we would be punished.

“It is a fantastic team. They are the champions of Portugal. They have incredible runners. They have a good team but I am very pleased because we make a big step towards the next round.

“Wow, what a goal [from Bernardo Silva]. I always push him to say he needs to score more goals. He has everything and the ability to score more like he has today. I am pretty sure he is happy.

“It’s just a game with a fantastic result. We have one more game to be in the quarter-finals and this is what you want. The players know me and the way we work that we can do better. I’m incredibly happy, please don’t misunderstand me, but we can do better.”

Next up for Man City is a home clash against Spurs on Saturday evening.