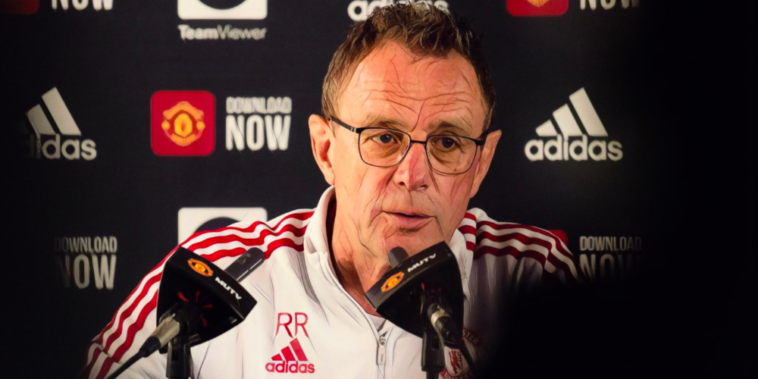 Ralf Rangnick is confident that Manchester United will be ‘a lot better’ next season as the club prepare for a new era under Erik ten Hag.

United face Chelsea in the Premier League on Thursday evening, with the club’s hopes of securing a top four finish all but over after losing three of their past four league fixtures.

It’s been a disappointing campaign for the Red Devils who sacked Ole Gunnar Solskjaer in November, before installing Rangnick as interim manager until the end of the season.

United have watched on as rivals Manchester City and Liverpool have competed for major trophies and Rangnick was asked whether the quality of City’s Champions League win over Real Madrid this week underlined how far his side have fallen behind the elite.

Rangnick, however, is confident that Ten Hag’s appointment and the new regime can lead to improved performances at Old Trafford next season.

“For me, it is now important that we take care of the future of the club,” he told his pre-match press conference. “As I said, I strongly believe that there is a lot of things that can become better and will become better with a new manager and hopefully with some new players, with some fresh energy in that squad.

“It’s obvious that quite a few players’ contracts are expiring, that there will be a number of new players. With this group of new players and the quality of players that are already here, together with the new manager, I am very positive that next season will be a lot better.”

United are sixth in the Premier League at present, but could miss out on European football entirely with both West Ham and Wolves in pursuit of qualification.

Rangnick believes a lack of European football next season could be a potential advantage for his side as the club bid to improve their Premier League performance, but has dismissed the notion that the Red Devils would ‘give away’ any of their remaining four fixtures.

“That could be an advantage, but that does not mean we will give away any of the remaining four games. For us it’s clear, and this is our obligation, this is our job, my job, the job of the players, that we try to get the best possible results then we will see at the end of the season in which position we will finish.

“Now, to speak about whether that would be an advantage or not, doesn’t make sense because this would be interrupted again…for me it’s important that we get results, that we play as good as we possibly can, because this will affect the mood for the new season.”