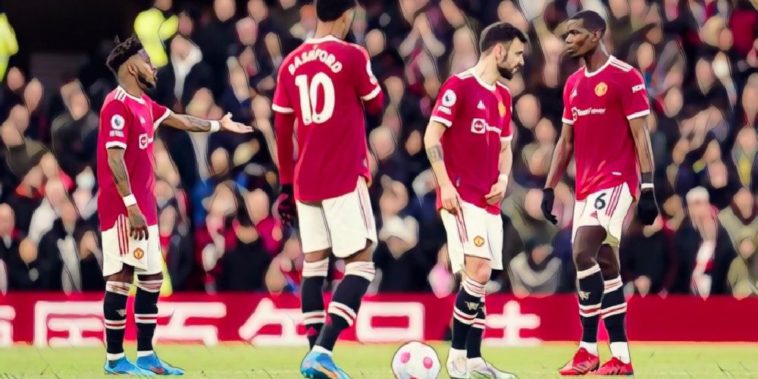 Manchester United continued to stutter their way out of top four contention, with the Red Devils’ latest mediocre showing ending in a 1-1 draw against Leicester at Old Trafford today.

Despite Cristiano Ronaldo and Edison Cavani being unavailable United boss Ralf Rangnick decided to leave the out-of-form Marcus Rashford on the bench and start without a recognised striker. It was therefore no surprise that although the home side produced some decent build up play during the opening exchanges, things quickly became insipid once they entered the final third.

Harvey Barnes looked a bright spot for Leicester, with the English winger pinning Diogo Dalot back and twice trying his luck from distance.

Bruno Fernandes had the best chance of the first half but visiting ‘keeper Kasper Schmeichel did well to deny the Portuguese playmaker, but all-in-all, the opening period was a dreadful watch with both sides lacking intensity or purpose.

Leicester began to sense the weakness of this Man United side as the second half progressed and Brendan Rodgers men would be rewarded in the 63rd minute when Kelechi Iheanacho’s stooping header from a brilliant James Maddison cross gave the visitors the lead.

Man United would reply almost instantly though, Brazilian midfielder Fred pouncing on a parried Fernandes effort and firing into the roof of the net from eight yards out.

Leicester thought they had won it late on through James Maddison, but the goal was disallowed after Iheanacho was adjudged to have fouled Raphael Varane in the build up.

United also had chances, although their performance was rather comically summed up when Anthony Elanga attempted to take the ball off Marcus Rashford’s toe after it looked like the England striker was about to fire home.

“The second half was the better one, we were struggling to find the rhythm in the first half possibly because of the international break,” Rangnick told Sky Sports.

”We gave away a goal on a transitional moment but the reaction after was good and scored a goal. In the end we are not happy with the result but the second half was OK.

When quizzed on his controversial decision to leave Rashford on the bench and start without a recognized striker the German coach revealed that the poor recent form of the 24-year-old was a contributing factor in his decision.

“The only one we had was Marcus Rashford. We knew this morning Cristiano could not play and decided to start Paul Pogba. After 60 minutes we made the change and had a central striker on the pitch.

“It is no secret that he was not full of confidence in the last couple of weeks. In training he is looking well but it was a question between Paul and Marcus, we went with Paul.”

Man United sit in sixth in the table after today’s result, four points behind fourth placed Arsenal and with Mikel Arteta’s side having two games in hand.