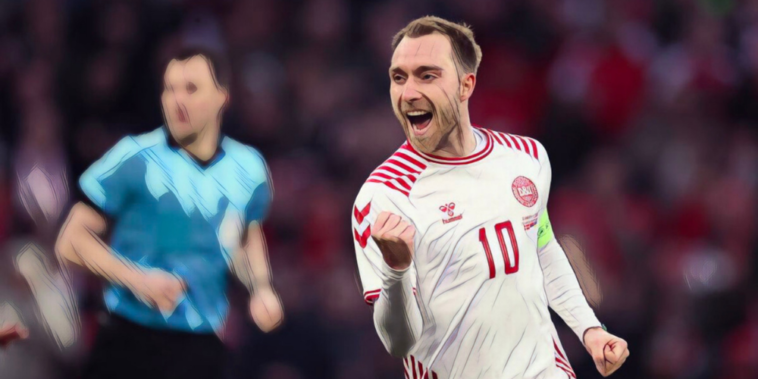 World Cup qualification has been on the line for several nations during the latest international break, the final pause in the Premier League season.

The break has provided a number of names with a chance to shine for their respective nations and there’s been plenty of Premier League faces who have impressed over the recent international fixtures.

Here are six Premier League players who have shone during the international break.

Bruno Fernandes scored twice to secure Portugal’s place at the World Cup finals in Qatar, netting both goals as the Portuguese beat a stubborn North Macedonia side in their play-off tie.

North Macedonia had upset Italy to reach the play-off final and frustrated the home side for much of the contest at the Dragão Stadium in Porto, restricting Fernando Santos’ side to just three shots on target.

However, two of those ended in goals for Fernandes, first opening the scoring after a one-two with club teammate Cristiano Ronaldo, before volleying home Diogo Jota’s cross in emphatic fashion.

Portugal survived late drama to beat Turkey last week, before Fernandes came to the fore to earn their place in Qatar. The 27-year-old has failed to replicate his prolific goal return in the national side, but delivered on a big occasion to send Portugal to a sixth straight World Cup finals.

Christian Pulisic is leading a new wave of talent from the United States, with the Chelsea winger all but assuring America’s place in Qatar with a brilliant hat-trick against Panama.

The USA – who missed out on qualification to Russia in 2018 – now just need to avoid a six-goal defeat to Costa Rica on Thursday to guarantee their place at the World Cup.

Pulisic is the highest-profile name in a squad packed with emerging talent making their name in Europe, with Sergino Dest (Barcelona), Weston McKennie (Juventus) and Brenden Aaronson (Red Bull Salzburg) among the names who have competed in the Champions League this season.

Pulisic’s treble – which included an audacious hat-trick goal – took him to 21 goals from 47 caps and he will hope to take that form into the Premier League run-in with Chelsea.

Ollie Watkins was given a chance to stake his claim as Harry Kane’s first-choice deputy with England this week, with the Aston Villa forward the only out-and-out striker, alongside Kane, included in Gareth Southgate’s squad.

Tammy Abraham had been expected to earn a chance following a superb season with Roma, but his withdrawal from the squad opened up an opportunity for Watkins.

The 26-year-old was handed his first start for the national side against Ivory Coast on Tuesday and marked the occasion with a goal, turning in the impressive Raheem Sterling’s centre from close range.

🗣 "It's an unbelievable feeling."

Ollie Watkins on making his first start for England and score at Wembley wearing the number 9 jersey pic.twitter.com/1DiabC3f1D

Watkins shook off an early knock to produce a strong all-round performance, posing plenty of problems for the Ivorian defence and working tirelessly leading the line.

Chances to impress will be limited for alternative centre-forwards as we approach Qatar, but Watkins has perhaps given himself a strong chance of selection as the likes of Dominic Calvert-Lewin and Patrick Bamford struggle for form and fitness.

Sometimes the pause for internationals can provide a welcome change of scenery for players and that certainly seems to have been the case for Josh King this international break.

King has failed to score a Premier League goal since November for Watford, but took less than an hour to help himself to a hat-trick in Norway’s 9-0 thrashing of Armenia.

The 30-year-old opened his account from the penalty spot – despite the presence of a certain Erling Haaland in the Norwegian side – and added two further goals as Ståle Solbakken’s side ran riot.

Haaland and Alexander Sorloth each added braces in a huge win for Norway, one which saw King take home the match ball after a 15-game drought in the Premier League.

He will hope it can prove the start of a purple patch, with Watford running out of time to escape from the Premier League’s relegation places.

Steven Bergwijn relished the latest international break after a frustrating spell on the sidelines at Tottenham, scoring three goals across the Netherlands’ fixtures with Denmark and Germany.

Bergwijn has started just four league games this season and has featured for only 167 minutes of Premier League football across Spurs’ last 10 games.

He scored a brilliant brace as the Dutch beat Denmark 4-2 in an entertaining contest, first rising to head home an opener before bending an unstoppable finish beyond Kasper Schmeichel.

Steven Bergwijn gets his second goal to make it 4-2 to the Netherlands! pic.twitter.com/lnjjrGVhai

Bergwijn’s thumping leveller then ended Germany’s eight-game winning run and the winger later admitted he could look for a change at club level to keep his World Cup aspirations alive.

“I don’t get to play much at the club. I am happy that the national coach has called me up, that’s not obvious [thing to do],” he told reporters, as per Sports Witness.

“You don’t forget about football. But of course, you feel that you don’t play that much. It was nice to be here again. We have a good and fun group.

“I wouldn’t know [whether form for the Netherlands can improve situation at club], we’ll see. Everyone wants to play of course. I have to keep my head up and work hard in training. Then we’ll see what happens in the summer.”

Christian Eriksen made a dream return to the Denmark side during this month’s international break, his first appearances for the national team since his collapse and cardiac arrest at Euro 2020 last summer.

Eriksen scored just two minutes after coming off the bench in the 4-2 defeat to the Netherlands, arrowing a finish into the top corner to mark his return in style.

The Brentford midfielder then captained Denmark to a 3-0 win over Serbia at Copenhagen’s Parken Stadium – the scene of his traumatic collapse last year – and got himself on the scoresheet once again in front of a raucous home crowd.

Christian Eriksen has just scored at the Parken stadium, 290 days after he suffered a cardiac arrest on the very same pitch.

He received a fitting standing ovation upon his substitution and admitted it was a ‘lovely feeling’ to captain the side and score on his first appearance back in Copenhagen.