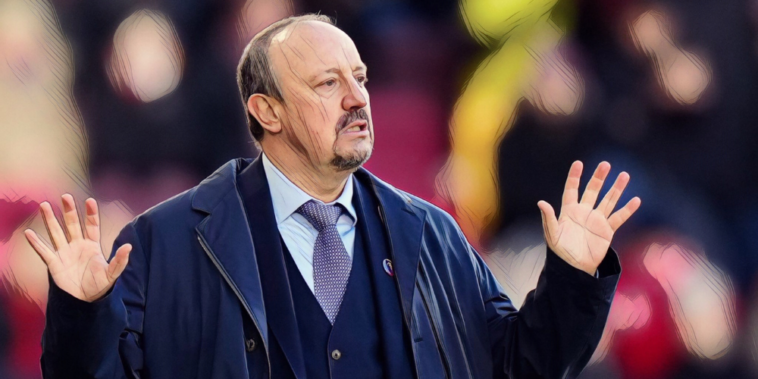 It is just over 17 years to the day that Rafael Benitez walked into the hostile atmosphere of Goodison Park for the first time as Liverpool manager. On the 11th of December 2004, a Lee Carsley goal handed the blue side of Liverpool a 1-0 win over their city rivals, making it just seven wins in 16 to begin the Spaniard’s reign on Merseyside.

Fast forward to the present day and the former Liverpool boss finds himself with a similar record for the blue half of the city. Should Everton win on Sunday, the record would read 6 wins, 3 draws and 7 defeats for the side currently sat in 12th, numbers eerily identical to Liverpool’s record of 7 wins, 3 draws and 6 defeats at the start of the 2004 campaign.

It was this previous stint on Merseyside that had caused tension between Everton fans and their new manager before a ball was even kicked this season, as they felt it was abhorrent for a former Liverpool boss to take control of the club they love – which was notable the moment Southampton took the lead at Goodison Park on matchday one – but now that anger seems to be shifting.

Following the humiliating 4-1 defeat to Liverpool last week, the Everton board had abuse hurled its way from a few of the Goodison Park faithful and the result was the departure of the club’s director of football Marcel Brands, following years of uninspiring signings and a lack of direction for the club.

This has taken some of the pressure off Benitez for now and the 2-1 win over Arsenal on Monday relieved it further. The former Reds boss could be the man to whip the blue half of Merseyside into a proper plan of direction. His time with the Reds had a similar beginning in terms of results but can it have a similar ending?

A Hectic Start to Life

It’s a common line heard amongst football’s characters, that if Real Madrid come calling you go and that is exactly the stance Carlo Ancelotti took over the summer. It left Everton and their owner Farhad Moshiri turning in the direction of Rafael Benitez and so began the hectic start to the season for the blue half of Merseyside.

As a result of misspending in previous transfer windows, Benitez was left with a measly £1.7 million to spend on Demarai Gray, with the rest of the players recruited being brought in on free transfers. It goes without saying that the sum was a microscopic one for a Premier League club and it made the Spaniard’s job harder than it already was.

This did not show however at the start of the season. It was crucial that Benitez got off to a good start to win over the Goodison Park faithful and that’s exactly what the former Liverpool manager got.

Everton lost just one of their opening seven games which culminated with a positive 1-1 draw against Manchester United at Old Trafford leaving a lot of Evertonian’s getting behind their new manager. The blues were a very organised outfit, hard to beat and scoring plenty of goals but that was about to change.

Along this run, injuries fell upon several of the club’s important players such as club captain Seamus Coleman, Yerry Mina, Richarlison, Dominic Calvert-Lewin and Abdoulaye Doucoure later on. With these key figures absent, the weaknesses in the playing squad as a whole became highlighted, leading Everton into a winless run of eight matches and many fans wondering where all the money the club had spent has gone.

The club has spent over £500 million since the arrival of Farhad Moshiri in 2016 and have very little to show for it. The match against Liverpool signified why the Toffees were enduring the run they were on, bringing on Anthony Gordon, Fabian Delph and Cenk Tosun in a bid to try and get Everton back into the match – with £34 million signing Alex Iwobi left as an unused sub – a prime example of the money that has been wasted.

The match was seen as the final straw by a lot of Everton fans and that’s why the anger boiled over post-match as the direction the club is currently going in is not a positive one, especially having witnessed that their city rivals are miles ahead of them having spent a similar amount of money (£514 million) since Jurgen Klopp arrived on Merseyside in 2015.

Monday night’s match against Arsenal however showed that there is still life left in this Everton side and most importantly that the players are still behind the manager. After the Liverpool game, Moshiri stated that Benitez would be given time to put his stamp on the club and if the blue’s owner stands by his words, one wonders what the Toffees could achieve.

Becoming a Legend in Blue

When you are already an established legend of Liverpool Football Club, reaching that status at Everton becomes almost impossible. It can still be achieved, however, and the main ingredient needed to achieve this is time.

As of now, Rafael Benitez has been given time and has been backed publicly by owner Farhad Moshiri, who told talkSPORT:  “Football is about crisis one day and glory the following day. Rafa is a good manager and underperformance is largely due to the injuries. Next two weeks, we will get to a full squad and, in the meantime, results will improve. Rafa needs time to have his mark on the squad. He will be supported to add depth to the squad. Managers need time. I have no doubt that we will have a strong second-half to the season.”

Moshiri highlighted two important points in his statement: injuries and squad depth. This means that the Everton owner is aware of the current problems, whilst willing to back Benitez in the upcoming windows, which is something the Spaniard will desperately want.

It has been a vital week for the former Liverpool boss, as he has had this public support from the owner, the departure of Marcel Brands gives him more control over transfers and the Arsenal result showed that the team is still behind him and that he is capable.

The structure of the club is starting to develop some shape now, as Moshiri and chairman Bill Kenwright seem to be putting a lot of faith into Benitez, primarily due to the success he has had at other Premier League clubs. If this is the case, then the club must start recruiting to their manager’s style in order to move forward.

Similar to what has been happening at Manchester United, Everton over the last five years have been buying players with a name and reputation, rather than players that match with the identity of the coach or the one the club wants to have.

This does not work anymore in the modern game, and it is evident in the recent success of both Liverpool and Manchester City. Manchester United seem to have realised this by appointing Ralf Rangnick, so now can the blue side of Merseyside follow suit?

Benitez traditionally wants his teams to be organised, compact and devastating on the counter, and the Blues will need to start by fixing their recent defensive woes. The Toffees have conceded the fifth-most goals in the league this season with 25 – seven of which have been from set-pieces – which equals the amount they conceded throughout the whole of last season.

Once the right bodies are recruited and the current players have more time to adapt to Benitez’s ideas, the fruits of the Spaniard’s labour should truly start to show themselves.

There should be no doubts over Benitez’s capabilities as a manager, he is experienced and tactically capable of taking Everton to where they want to be. Most of the questions surround the club’s recruitment and it looks like that is now being placed into the hands of the Spaniard as well. There is also a question of time, the owner and chairman seem to be all in but that could change due to results and the pressure from the fans.

The fans are a big part of the battle for Benitez at Everton, but it will be easy to change their tune. Should the former Liverpool boss end the club’s trophy drought the fans will find it hard not to sing his name and legendary status should not be too far away.