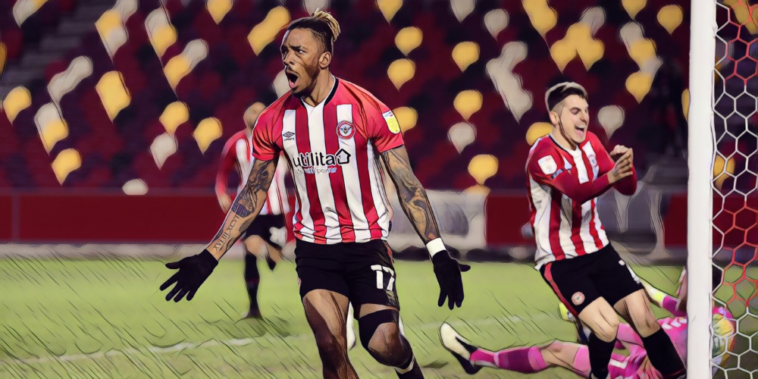 Norwich, Watford and Brentford are the three new teams ahead of the 2021/22 top-flight campaign, each having earned promotion to the Premier League last season.

The arrival of new teams into the division always provides a sense of intrigue, with plenty of unknowns as to how each will handle the step-up in quality following gruelling Championship campaigns.

With the new season now less than two weeks away, we’ve picked out some of the leading names from the promoted sides and the players we’re most looking forward to seeing in action.

Here are five promoted players we can’t wait to watch in the Premier League this season.

Ivan Toney’s incredible season last time around was a major reason behind Brentford’s promotion, with the Bees set to compete in English football’s top tier for the first time since 1947.

Signed last summer in a £5m deal from third-tier Peterborough, the forward filled the void left by the departed Ollie Watkins and Said Benrahma to break the second-tier single-season goal record in 2020/21.

Toney scored 31 league goals and provided a further 10 assists, both leading totals amongst his Brentford teammates, with the 25-year-old ready for the step into the Premier League after developing his game in the lower leagues.

The forward struggled for opportunities after signing for Newcastle as a teenager, but after winning back-to-back Golden Boot accolades in League One and the Championship is primed to make an impression on the top tier.

Toney’s finishing ability was demonstrated by the underlying statistics with the star’s 33 goals in all competitions outperforming his expected goals figure (28.69), his intelligent movement and instincts around the area set to be crucial to Brentford’s hopes of consolidation.

Whilst names such as Ben Godfrey and Jamal Lewis sealed immediate returns to the top tier with transfers, Cantwell remained to play an important role in Norwich’s promotion as Championship winners.

The 23-year-old scored six goals and provided seven assists in 30 league starts for Daniel Farke’s side, performances which have seen him routinely linked with Premier League clubs in recent months.

After seeing his early season interrupted by transfer speculation involving Leeds and a hip injury, the ‘Dereham Deco’ returned to the side in fine form and his average of 1.6 key passes and 1.6 dribbles per 90 minutes both ranked amongst the second-tier’s leading players.

Cantwell’s fearless approach to his first Premier League season won admirers and 2021/22 provides the winger a chance to showcase his development since – if Norwich can keep the star out of the clutches of Aston Villa.

The Midlands side reportedly eyeing the former England u21 international as a potential Jack Grealish replacement, though the Canaries will not allow Cantwell to leave on the cheap.

Watford broke their transfer record to sign Sarr for £30m from Rennes two seasons ago, with the winger showing signs of promise despite the Hornets’ relegation from the Premier League during his maiden campaign.

Sarr’s electricity on the flanks played a crucial role in Watford’s immediate return to the top tier with a second-place finish, the Senegal international finishing as the club’s leading scorer with 13 league goals last term.

Sarr remains a raw talent but possesses scintillating speed and a direct approach that terrifies opposition full-backs, his performances for Watford having seen him linked with moves to the likes of Liverpool and Aston Villa this summer.

Watford have so far been able to keep hold of their prized possession and Sarr will be a major part of the Hornet’s attacking play this season, the 23-year-old – with two seasons of development in English football now under his belt – better prepared for his second shot at the Premier League.

The former Arsenal academy graduate has found a home at Brentford, maturing into one of the EFL’s most talented players during his three seasons with the Bees.

Dasilva came through the ranks at the Gunners but made just three senior appearances before signing for Brentford on a free transfer, with the newly-promoted side’s faith in the midfielder having been rewarded with a number of star showings.

Provided a licence to join the attack on the right side of Brentford’s midfield three, the 22-year-old has scored 17 league goals across the past two seasons, drifting into forward areas and combining with the club’s front players to great effect.

Dasilva’s mix of physical attributes and technical elegance make him appear tailor-made for the Premier League, possessing an ability to drive forward from midfield in possession and carry Brentford up the pitch.

Before the hip injury that curtailed his Championship season in February, Dasilva ranked amongst the second-tier’s leading midfielders for progressive runs per 90 and dribble success rate.

No timescale has been put on Dasilva’s return after his season was cut short, but Brentford will be hoping the influential star is back sooner rather than later ahead of the club’s first top-flight season in 74 years.

Another talented young player who made an impression in a relegated side two seasons ago, Max Aarons remains a part of Norwich’s newly-promoted squad despite continual links to some of Europe’s biggest clubs.

Barcelona, Manchester United, Arsenal, Everton and Tottenham have all been credited as admirers of the 21-year-old, who has become an integral part of the Canaries’ side since his debut as a teenager in 2018.

Aarons possesses explosive pace and acceleration, attributes which help him both burst forward to join the attack and recover defensively as a modern front-footed full-back.

Whilst hauls of just two goals and two assists across 45 league appearances last season must be improved in order for the youngster to reach the next level, his 61 key passes from open play ranked second in the Championship last term and highlighted his ability to be progressive in the final third.

Like the aforementioned Sarr and Cantwell he has had a taster of Premier League football once before, but returns to the top division a much-improved player and one of Norwich’s brightest talents.