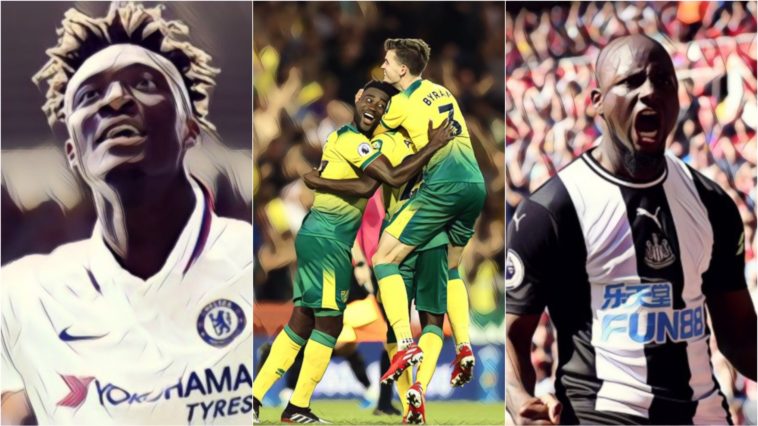 Few things can match the elation and unbridled joy of getting one over the big guns. Norwich City did just that with their 3-2 giant killing of Manchester City.

Watch the reaction.… such explosions of sheer joy https://t.co/LTUz7kBogE

After the final whistle it was unsurprising to find so many Canaries fans describe it as their best moment as a supporter.

If you weren’t convinced Tammy Abraham was the real deal before this past weekend (I see you doubters out there), then maybe his superb performance against Wolves will convince you otherwise. His hat-trick displayed the excellent timing, positioning and finishing ability he possesses all in one game.

The former Aston Villa loanee is now the joint top scorer in the league alongside Sergio Aguero with seven goals, and while I expect his goal scoring rate to slow down somewhat, he is still on course to have a fantastic season with the Blues.

Jetro Willems hit an absolute rocket into the far left corner of Liverpool’s net on Saturday, and his shot was at the perfect angle for the hard camera to give viewers the most satisfying view possible. Unfortunately for the Dutchman, Newcastle United ended up losing 3-1 at Anfield.

Fikayo Tomori also scored a rocket for Chelsea against Wolves that deserves recognition.

Who doesn’t love a good one-two? Well, this flick from Roberto Firmino to set up Mo Salah’s goal against the Magpies was delightful.

This video gives a fuller picture of the entire move from different angles, letting us see just how well worked it was from the two players.

It wasn’t the worst miss you’ll ever see, but against Southampton David McGoldrick was straight through on goal, one-on-one with the goalkeeper, in point-blank range — and he shot it straight at Angus Gunn.

What makes it especially egregious is the fact that the Sheffield United striker has now squandered big chances in three different games. Those missed opportunities can make such a difference at the end of the season. How long will Chris Wilder entertain the Irishman?

1 – Tammy Abraham is the first player in Premier League history to score a hat-trick and an own goal in the same game. Involved. pic.twitter.com/3uPLkp5HCr

If you watch this video closely, you can see the exact moment Nicolas Otamendi‘s brain fell out his arse:

With John Stones also starting in the 3-2 away defeat to Norwich, Manchester City’s centre-back pairing on the night cost £83m. Pep Guardiola might want to look for the receipt.

Jamie Carragher called it “so dozey”, but the Argentine defender wasn’t the only one making mindless decisions over the weekend. Sokratis inexplicably passed the ball into the path of Watford’s Gerard Deulofeu, who gave it to Tom Cleverley to allow the opposition back into the game.

Arsenal shooting themselves in the foot against Watford

Arsenal gave up a two goal lead to draw 2-2 at Vicarage Road after David Luiz gave away a penalty, which Roberto Pereyra slotted home for the equaliser.

It probably seems a bit weird to do this after their team just completed a rousing comeback against one of the league’s better teams, but this week’s Donkey is the decision makers at Watford.

The Hornets have had a poor start to the league, with no wins in five games, and that’s been a continuation of the indifferent form they’ve been on since the tail end of the previous campaign — they have won just two of the last ten league games. In response, they sacked manager Javi Gracia and replaced him with Quique Sanchez Flores, the second time the Spaniard has taken the reins at Vicarage Road.

From this view, however, it looks like a bad decision. Yes, recent results have been bad, but Gracia lead the club to their highest finish in the Premier League era and a place in the FA Cup final. That cup run may have masked some of the problems the side was enduring the whole time, but it’s difficult not to look at his time in charge on the whole as a success. And it’s even harder to see why they have rehired Flores.

The former Real Madrid full-back’s style of play is far from exciting, and in his previous stint at the club, he did a similar but not quite as impressive job as his predecessor — a mid-table finish and FA Cup semi-finals. In 2015/16 his side lost two games more and scored 12 goals fewer than Gracia’s last season.

Watford looked re-energised and willing to fight for every ball on Sunday, but in the long-run the change of managers might do more harm than good. (Even if I’m happy it means I got at least one prediction right this year.)