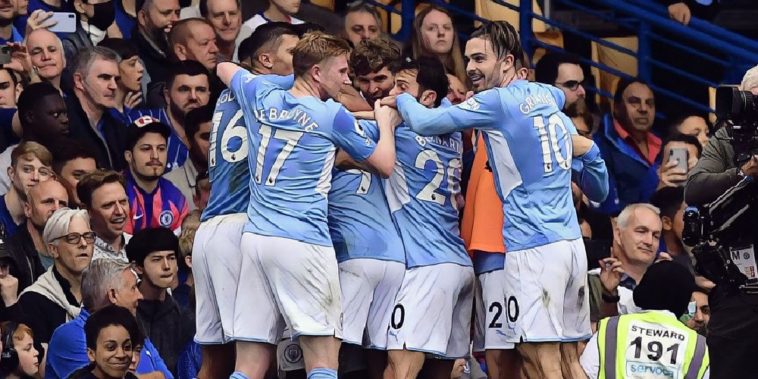 Each week we delve through the Premier League’s weekend action and compile our divisional Team of the Week, with the latest round of fixtures serving up plenty of shocks and surprises, particularly at the top of the table.

Chelsea’s unbeaten run came to an end at home to champions Manchester City, while Manchester United suffered a third defeat in four games in all competitions at home to Aston Villa, with Bruno Fernandes missing a stoppage-time penalty.

Elsewhere on Saturday Liverpool were held to a thrilling 3-3 draw with newly-promoted Brentford, while West Ham United’s – and Michail Antonio’s – fine start to the season continued as the forward netted a late winner against Leeds at Elland Road.

Sunday’s standout fixture saw Arsenal run out comfortable winners in the north London derby following a first-half blitz at the Emirates, with the Gunners having now overtaken their rivals after previously being at polar opposite ends of the table after three games played.

Honourable mention must go to Aston Villa’s Emi Martinez for his late penalty sh*thousery in the win at Old Trafford, while David Raya and Aaron Ramsdale both made impressive saves for  Brentford and Arsenal, respectively, yet we’ve opted for Wolves’ stopper Jose Sa for his clean sheet against Southampton.

The latest in a long line of Portuguese imports at Molineux, the former Olympiacos man was handed a difficult task in filling the shoes of Roma-bound Rui Patricio, yet after an initial tough start in English football, the 28-year-old looks to be finding his feet for Bruno Lage’s side.

There was a shaky moment early on at St Mary’s for the Wolves ‘keeper as he laboured on the ball before firing it straight to the feet of Oriol Romeu, although he redeemed himself with a strong second-half display that included an excellent double save to deny both Mohamed Elyounoussi and Che Adams.

Sa also reacted quickly to turn Tino Livramento’s drilled near-post effort behind for a corner, before capping his afternoon with some quick thinking to send striker Raul Jimenez through over the top for the Mexican to net his first goal in almost a year, following his horrific head injury suffered last October.

While the forward did most of the work for the game’s solitary goal in truth, the ‘keeper can still just about claim the assist, meaning he is the only Wolves player to have registered one in the league this season – a worrying statistic for new boss Lage.

Matty Cash netted his first goal for Villa in the win over Everton last weekend and followed it up with another fine display against Manchester United, producing a real threat from his right-wing back berth and keeping the hosts attacking unit relatively quiet throughout.

While his task was made somewhat easier by the withdrawal of Luke Shaw to injury midway through the first-half, his relentless energy and will to drive forward made him a constant outlet on the break for Dean Smith’s side, the 24-year-old notably teeing up fellow wing-back Matt Targett who should’ve slotted home at the back post.

Arsenal’s summer signing Takehiro Tomiyasu also deserves a nod for his fine display against Spurs, while the aforementioned Livramento was also once again impressive in the defeat at home to Wolves.

Manchester City enjoyed a dominant display at Stamford Bridge against title rivals Chelsea, yet were once again thankful for the rock-solid defensive showing of last season’s top-flight Player of the Year, Ruben Dias, who marshalled the backline brilliantly against an improved Blues forward line in the second-half.

His most pivotal involvement saw the former Benfica man make an excellent sliding block to deny Mateo Kovacic’s second-half strike, with that moment a further indication of the defender’s old-fashioned willingness to put his body on the line for his side.

It is also no surprise to have seen him elevated to the status of captain in the absence of Fernandinho, such has been his impact since his arrival last summer, with the 24-year-old having conceded just 22 goals in the 38 Premier League games he has played in.

Netting a late winner at Old Trafford and shackling arguably one of the world’s best players in Cristiano Ronaldo, it doesn’t get much better than that for a defender, with Villa’s Kourtney Hause enjoying a fine return to the starting XI.

The irony is that his inclusion only came about due to the enforced absence of on-loan United man Axel Tuanzebe, who was ineligible to face his parent club, with Hause going on to impress alongside Tyrone Mings and Ezri Konsa in the centre of a stubborn back three.

The former Wycombe Wanderers man not only kept the Red Devils forward line at bay, but produced a fierce header just minutes from time to snatch a deserved victory for his side. He would, however, concede a late penalty for handball, only to be reprieved by Bruno Fernandes’ howler.

Not too many standout performances at left-back this weekend, yet we’ve opted for Brentford’s Rico Henry, with the 24-year-old putting in an aggressive and front-foot display from left-wing back against Liverpool to help the newly-promoted side snatch a late point.

What was most impressive from Henry and co was their resilience to keep coming back at Jurgen Klopp’s side, as they twice came from a goal down to draw level, with substitute Yoane Wissa netting an 82nd minute equaliser in what was a barnstorming encounter at the Brentford Community Stadium.

That result has moved the Bees up to ninth in the table after two wins and three draws from their opening six games in their debut Premier League campaign, with all the indications suggesting that Thomas Frank’s men will be more than just survival hopefuls this season.

Another star of City’s assured victory over Chelsea, Bernardo Silva was the heartbeat of the champions’ midfield, putting in a trademark all-action display as Pep Guardiola’ side bounced back from their limp display at home to Southampton last weekend.

The Portugal international had looked set to be departing the Etihad over the summer – with his manager even publicly announcing his desire to leave – yet he is seemingly rubber-stamping his importance to his side with each passing game, not least for his flexibility.

Comfortable in midfield or anywhere across the front line, the former Monaco man is a rare commodity and one that simply cannot be allowed to exit the Etihad any time soon, despite the plethora of attacking options at Pep Guardiola’s disposal.

After their dismal start to the season, Arsenal look to be back on track after picking up three successive victories in the league, the most convincing of which came at home to an out-of-sorts Tottenham side at the Emirates on Sunday.

That 3-1 mauling saw notable displays from the likes of Martin Odegaard and Thomas Partey, yet it was young Emile Smith Rowe who really caught the eye once again, the 21-year-old netting the game’s early opener before teeing up Pierre-Emerick Aubameyang for the second after a blistering counter-attack.

🤩 The goal
🔥 The celebration

In truth, Mikel Arteta’s simply outplayed their London rivals, with Smith Rowe the beneficiary of what looked to be a more front-foot approach from the Spaniard.

It may be early days still in his Gunners career, yet a senior international call-up can’t be too far away for the playmaker.

Another of Brentford’s star performers on Saturday, midfielder Vitaly Janelt put his name on the map with a hugely impactful showing against the Reds, capping his fine evening’s work with a scrappy headed goal to draw his side level at 2-2.

Like all three of their goals on the day, his header was far from pleasing on the eye, yet illustrated the hunger and desire that this Bees side have to mix it with the big boys and prove that they will be no pushovers for any side this season.

The new campaign may still be in its infancy, yet Janelt and co are already looking like being this season’s surprise package, so long as they can keep their impressive core XI free from injury.

Bukayo Saka looks to have shaken off the disappointment of his penalty miss at Euro 2020, with his performance against Nuno Espirito Santo’s side the latest indication of just how talented a player he really is.

Like Smith Rowe, the 20-year-old registered a goal and an assist on the day, creating the opener for his fellow Englishman with a fine pull back, before racing through on the break and slotting home for what was a third goal inside just 34 minutes.

The away side may have been far from their best, but they simply could not live with the pace and the trickery of the Gunners attack, with manager Arteta having perhaps found a winning formula after a disrupted early season start due to injury and Covid-19.

Aged 20 years and 21 days, Bukayo Saka became the youngest player in #PL history to score and assist in a north London derby 👊

All the talk over the summer was about Man City’s lack of an out-and-out centre forward, having missed out on both Harry Kane and Cristiano Ronaldo, while Chelsea had gone out and splashed the cash on the returning figure of Romelu Lukaku.

As Saturday’s win proved, however, the champions fluid forward line is no match for anyone on their day, with Brazilian international Gabriel Jesus the star attraction against the European champions, showing some fine footwork to work a yard of space for himself in the box and squeezing his effort past Edouard Mendy.

That winning strike was no more than City or Jesus deserved, with the versatile forward proving once again that the signing of a striker is not integral to whether the club has a strong season or not.

He may have lined up on the right-wing at the weekend, yet wherever he starts for Guardiola’s side he is likely to make an impact, having already scored twice and registered three assists in the league thus far.

Rounding off our team this week is Leicester City’s Jamie Vardy, following the Englishman’s brilliant brace in the 2-2 draw with Burnley on Saturday, taking his early season tally to five goals in just six league games.

The others are Tammy Abraham, John Barnes, Niall Quinn and Wayne Rooney#LEIBUR pic.twitter.com/W7h1WCVZSJ

The veteran striker had got off to the worst possible start after turning into his own net from an inswinging corner, yet more than redeemed himself by calmly slotting home an equaliser, before snatching a point late on after rounding the onrushing Nick Pope and sliding the ball into the empty net.

The only disappointment for the Foxes, and for Vardy, will be that his deadly double couldn’t inspire them to victory, with Brendan Rodgers’ side perhaps suffering a slight hangover from another top-four slip-up in the latter stages of last season.