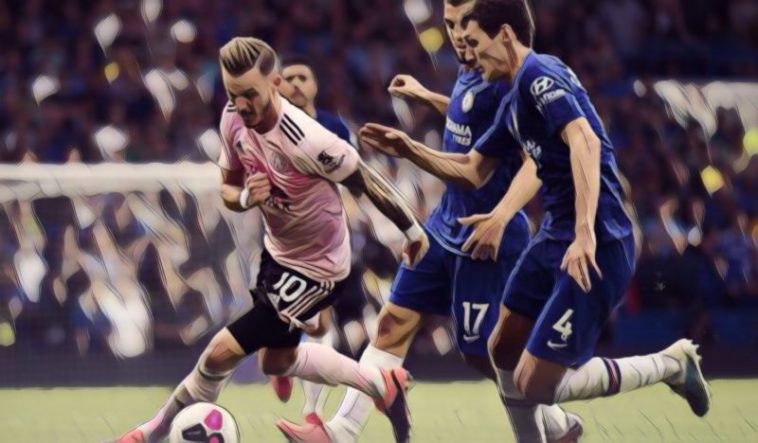 Frank Lampard’s wait for a first win as Chelsea boss goes on after the Blues drew 1-1 with Leicester City today at Stamford Bridge.

Chelsea flew out of the blocks and deservedly took the lead via a superb Mason Mount finish. However, the home side were unable to turn their dominance into a second goal and Leicester grew into the game after the break, eventually equalising through a powerful Wilfred Ndidi header.

Almost cost his side with his overconfidence on the ball during the first period, although he had no chance with the goal and made a few smart stops late on as Leicester began to dominate.

Normally a model of consistency, sadly not for the first time so far this season, the Spaniard looks to be a player whose powers are on the wane.

Showed his pace on several occasions to stop the threat of Jamie Vardy, and scrambled well a couple of times late in the game as the Foxes started to cut Chelsea open for fun.

Has performed well over the last couple of games after his horror show at Old Trafford, although question marks remain as to whether the Frenchman is good enough to be a regular for a top-six side.

Got through a mountain of work as always and he showed just how much his passing range has improved at times.

Is steadily proving many of the doubters wrong, the Italian looks to be revelling playing with extra freedom under Lampard, and it seemed like a strange decision to withdraw him with 20 minutes to go.

A solid display from the former Barca man, full of energy and skill.

Made the opener with his intelligent pressing and finished brilliantly under severe pressure. Looks a real danger whenever he picks the ball up in the final third and work-rate is top class, it’s easy to see why Lampard has so much faith in the youngster.

By no means bad, but the American seemed to skirt around the edges of the game, never really looking like a threat from the left of Chelsea’s attack.

Showed what a valuable asset his hold up and lay off play can be, almost notching three assists within the opening stages. Will be disappointed how poor his sides delivery was when they worked their way into decent positions out wide.

Unlike with Mount, it is actually hard to see why Lampard reckons Abraham can make an impact at the elite level. A Championship striker.

Horrendous. An absolutely abysmal display 20-minute cameo from the Brazilian, who looked like he would rather be anywhere else than out on the Stamford Bridge turf today.

Buzzed around the middle of the park, without much effect.

Made a couple of smart stops during the first half, when his side was under the cosh.

A really intelligent player, who looked a real threat down the right throughout.

His distribution was good and coaxed his backline through the home sides early onslaught.

While he has big boots to fill after Harry Maguire’s departure, the Turkey international showed enough promising signs so that Leicester fans don’t have to worry too much about their side not signing another centre-back this summer.

Looked rusty at first after featuring just twice last season, but grew into the game and got forward well during the second period.

Started terribly after he was pickpocketed by Mount for the opener. However, the Nigeria international would find redemption, powering home a header to seal a point for his side.

Fully of energy and ingenuity, although his final ball let him down at times. Does look to be a decent addition to Brendan Rodgers side though.

Neat and tidy, but nowhere near as effective as during the second half of last season.

Recovered from a shaky start to do a decent job in the middle of the park.

Was a peripheral figure on the left of Leicester’s attack during the opening 45 minutes, but came alive to run the show after the break. The talented youngster did though miss one guilt-edged chance that would have sealed the win for his side.

His movement kept Chelsea’s defence busy and he had a couple of half-chances, but the former England man never found that clear cut opportunity he craved.

Took up some good positions and competed well on his Premier League debut.

Industrious down the right-wing after his last introduction.

Read Also: Five of the best goals from the Halfway line