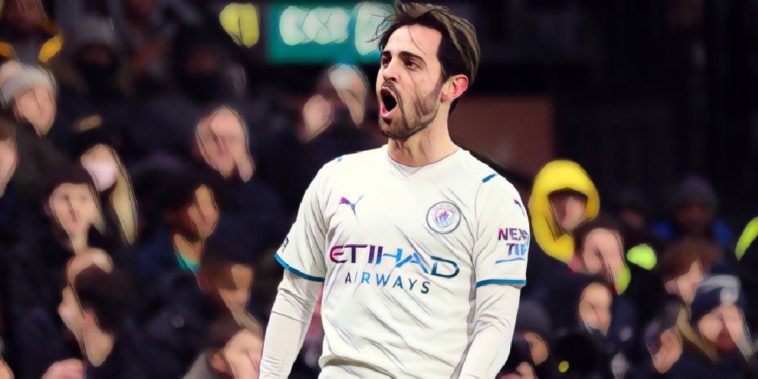 Each week we delve into the Premier League’s weekend action and compile our divisional Team of the Week.

Chelsea surrendered their position at the top of the Premier League following a 3-2 loss at West Ham, with Manchester City and Liverpool moving ahead of them following their wins over Watford and Wolves respectively.

Manchester United got the Ralf Rangnick era underway with a 1-0 win over Crystal Palace, while mega-rich Newcastle finally registered their first three points of the season as they beat fellow strugglers, Burnley, at a somewhat relieved St James Park.

It’s incredible to think a ‘keeper who conceded three makes it into our Team od the Week, but here we are, Daniel Bachmann prevented Man City from racking up a cricket score at Vicarage Road as Pep Guardiola’s side took advantage of Chelsea’s defeat to move to the top of the table.

The Austrian made nine saves on Saturday evening – the joint-most by a goalkeeper in the Premier League this season – including eight from inside of his own box as City peppered the Hornets goal, with Jack Grealish being denied on a number of occasions by the former Stoke ‘keeper.

Daniel Bachmann made nine saves against Man City, the joint most by a goalkeeper in a Premier League game this season.

Keeping the score down. 🧤 pic.twitter.com/Amd3Uny1yw

While he didn’t add to his already impressive goal involvement stats, the Liverpool right-back was always available down the Reds right as Jurgen Klopp’s side continually probed Wolves before Divock Origi’s latest 94th minute winner.

The Scouser showcased his wide array of passing and crossing abilities, completing more passes in the attacking third than any other player in the match (23) as well as completing the most crosses (5).

While Callum Wilson grabbed the headlines as Newcastle gained their first win in 15 attempts this season, the victory was only possible because they were able to keep their first clean sheet of the campaign.

Burnley are often a handful up front, though Lascelles did well at the back as he won 11 of his 13 aerial duels and made six clearances as Eddie Howe’s side moved level on points with the Clarets and to within three points of safety with a potentially vital 1-0 win.

"He's a hugely important player because he has physicality and pace in our back line and they're qualities we need. I really like Jamaal and I think there's a lot more to come from him. I think we can take his game to new heights." pic.twitter.com/tSMKHJKlGr

While he could have perhaps closed down Harvey Barnes a little quicker for the Leicester opener, he certainly made amends as he helped Steven Gerrard to his third win in four games since taking over at Villa.

Konsa made three clearances and won three of his five aerial duals, though it was his match-winning contribution at the other end that earns him a place in our Team of the Week, the 23-year-old getting the finest of touches to steer home a header to level the scores. Before squeezing his second-half header into the back of the net, beating Kasper Schmeichel at his near post from a corner.

The Brazilian hasn’t been afforded too many opportunities since his move from Porto last year, though with Luke Shaw’s continued absence, Alex Telles has certainly shown his new manager and the Old Trafford faithful what he is capable of.

After putting in a decent performance against Arsenal in midweek, the 28-year-old followed that up with another good showing against a Crystal Palace side who have earned plenty of plaudits this so far this season.

The left-back was defensively solid and provided plenty of threat going forward, seeing a first-half effort from a corner go narrowly wide of the post, while a second-half free-kick from a narrow-angle clipped the bar.

Alex Telles made more tackles + interceptions [11] than any other player on the pitch vs. Crystal Palace.

His last couple of performances will give new boss Ralf Rangnick something to think about when Shaw makes his return to fitness.

A much-maligned player for a number of years since his £50m move to Manchester United, and while he has plenty of flaws in his game, he has shown some of the qualities that he does possess in recent outings.

Having often been deployed as a deep-lying midfielder under Ole Gunnar Solskjaer, Michael Carrick and Ralf Rangnick have chosen to play the Brazilian slightly further forward, utilising his bundles of energy to retrieve possession higher up the pitch.

The midfielder ranked first for both tackles (7) and passes (72) against Crystal Palace, and ranked second for passes in the opposition half (45), while he also won nine of his 15 duels and made two clearances. He capped his performance with a superb match-winning strike with his unfavoured right-foot, his goal even leaving Herr Rangnick surprised to see his curling effort fly past Vicente Guaita.

🗣"I had to ask my assistant coach who scored! He said Fred and I said Fred with his right foot!?" 🤣

Ralf Rangnick was not expecting Fred to score with his right foot pic.twitter.com/6PVddcxbU9

The Portuguese admittedly wanted to leave Manchester City in the summer following a lack of opportunities last season, but after being denied an exit, he has responded in the perfect manner and has been one of the best players in the Premier League so far this season.

The City playmaker had already netted five times so far this season – including three in his last five for the Citizens – and added two more to his tally as he sent his side back to the top of the table.

He was involved in the buildup before finishing off his first, sliding a perfectly weighted ball into the path of Ilkay Gundogan, though the German’s effort was saved by Bachmann. The ball dropped to Bernardo inside the area, and after wriggling past the attentions of three Watford defenders, he slipped the ball into the back of the net from a narrow-angle to double his side’s advantage.

Bernardo had scored an absolute stunner in the midweek win over Aston Villa, and he scored another superb strike to double his tally, receiving the ball down the right, being allowed time and space to cut in on his favoured left foot, before curling a wonderful effort beyond the Watford ‘keeper.

🗣 "He danced inside and curled it deliciously into the top corner!"

Aside from his goals, his all round play was superb, playing four key passes, and finishing the game with a pass completion percentage of 93.4% in what was his latest influential display.

While Chelsea surrendered their position at the top of the table following their 3-2 defeat to West Ham, Mason Mount continued his good form as he contributed to both of the Blues first-half goals.

He provided the assist from a corner as Thiago Silva opened the scoring with a header, before restoring the Blues lead just before the interval with a superb strike. The 22-year-old demonstrated excellent technique as he connected to a raking Hakim Ziyech cross-field ball, striking a sumptuous right-footed volley low past Lukasz Fabianski.

What a hit from Mason Mount! 🎯

The technique on this volley 🤤 pic.twitter.com/pLZYp6c9Po

He played four key passes and completed five of his attempted 10 crosses, while also being responsible for three of the Blues five shots on target.

Deployed on the right, but constantly showed excellent awareness to find pockets of space, floating inside and showing plenty of desire to get forward and be a real nuisance against Chelsea.

Bowen won on the penalty for West Ham’s first equaliser, putting the press on Edouard Mendy who ultimately made a clumsy challenge to bring down the 24-year-old, before he scored the Hammers’ second of the game with a fine strike from the edge of the area.

He could ould have had a second with 15 minutes to play but couldn’t get the requisite contact on Michail Antonio’s cross as he arrived at the back post unmarked.

Some strike from Jarrod Bowen! 🚀

He places the ball through the defender's legs and into the back of the net and West Ham are level again! 🎯 pic.twitter.com/dUUVFUD81u

While Raheem Sterling has been one of the key components of England’s success in the last 12 months, his fortunes in a Manchester City shirt have been of a stark contrast.

However, the former Liverpool man has shown signs of getting back to his best in recent weeks and has seemingly regained the trust and favour of Pep Guardiola, registering three goals and an assist in his previous five outings for the champions going into their game against Watford.

The 26-year-old opened the scoring inside four minutes as he set City on the road to reclaiming top spot, meeting a Phil Foden cross to nod past Daniel Bachmann in the Watford goal.

He played the full 90 minutes and had a number of chances to extend his goalscoring tally but was thwarted by Watford stopper.

Antonio Conte continues to try to put his stamp on this Tottenham side, and while he will be judged by results against better sides than Norwich, the comprehensive 3-0 win kept the North Londoners within two points of the top four.

It looks as though Heung Min Son will once again be an integral figure for his side, extending his position as the club’s leading goalscoring as well as registering his second assist of the campaign, laying off the ball to Lucas Moura who wriggled past his man before unleashing a thunderous strike beyond Tim Krul to open the scoring.

The South Korean was a constant threat going forward as he linked with Moura and the misfiring Harry Kane, before netting the games final goal, receiving the ball from Ben Davies, doing well to evade the attentions of his marker as he shifted onto his right foot and lashing low past Krul.