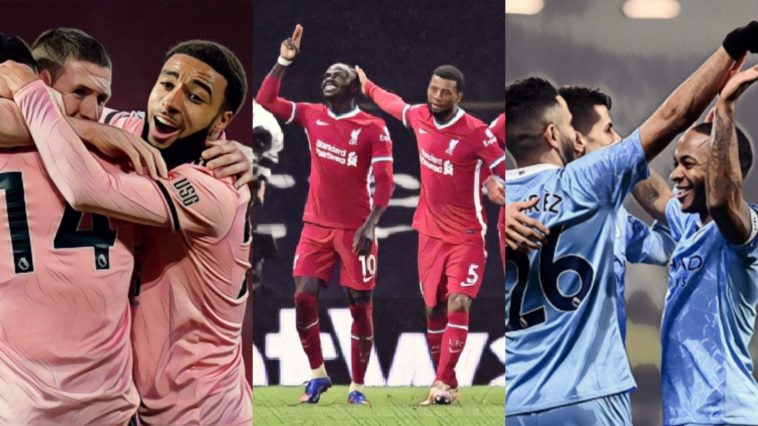 Presenting some of the standout statistics from the midweek games in the Premier League, featuring Liverpool’s first goals in over a month, Sheffield United’s shock win over Manchester United, Manchester City’s unbeaten run, and more.

Liverpool gave the perfect response to José Mourinho’s jibes during the week by beating his Tottenham Hotspur side 3-1 at their own ground, ending their goal drought in the process.

Roberto Firmino scored in injury time of the first-half to score their first goal in 32 days, a run that saw them fail to find the net in 482 minutes of action and 93 shots taken. The Brazilian is the first Liverpool player to score in three successive league matches against Spurs since Luis Suarez.

With a goal and assist on the night Trent Alexander-Arnold grew his tally since the beginning of last season to 21 goal involvements (five goals, 16 assists), more than any other defender in that time.

Sadio Mané got the third of the night, taking his overall Premier League tally to 70 – one more than former Reds striker Luis Suarez. Having assisted the opener as well, the Senegalese attacker has at least two goal involvements in five away matches in all competitions this season.

6 – José Mourinho has lost six of his 23 home league games in charge of Tottenham Hotspur, more than he has at any of his previous clubs. Stormed. #TOTLIV pic.twitter.com/AXcWqjX2mT

Mourinho has now lost his last three league battles with Liverpool, his longest losing run against an opponent in his top-flight managerial league career.

Sheffield triumph in Battle of the Uniteds

Sheffield United managed their first away victory of the season by beating Manchester United 2-1 on Wednesday, but it was also a fairly historic one. The Blades became the first Yorkshire outfit to win at Old Trafford in the Premier League since the rebrand. Only two teams from the region have previously managed it: Leeds United (FA Cup, 2010) and York City (League Cup, 1996).

Chris Wilder’s charges have won more matches in all competitions in the month of January (3) than they had in the preceding five months (1).

Before Liverpool’s win on Thursday, Oliver Burke’s winner meant that his two wins and one goal scored was more than the Reds had managed in the Premier League since 30 December (for 24 hours anyway). Before that, the Scot endured the longest winless run from the start of any Premier League player’s career, going 25 games without a victory.

At the age of 38 years and 163 days, Phil Jagielka was the oldest outfield player to start a Premier League match at Old Trafford against Manchester United since Richard Gough, who was 38 years and 304 days old, in February 2001 for Everton.

Before last season five goal wins were de rigueur for Manchester City under Pep Guardiola, boring even. And while they did indeed tonk a good few opponents in 2019/20, they just weren’t the same formidable, unbeatable force that steamrollered their way to consecutive Premier League titles.

Following their 5-0 win over West Brom on Tuesday, the Citizens ended the day on top of the table for the first time this season. That makes them the ninth different side to do so, the most within a single top-flight campaign since 1986-87 (also nine).

City have won seven consecutive top-flight games for the first time since August 2019, when they were on a run of 15 wins. They also possess the longest active unbeaten run in Europe’s top five leagues, having gone 11 games without defeat.

The erratic home form of Manchester United struck again on Wednesday night, as they succumbed to their fourth league defeat out of ten at Old Trafford this season. This is the most they have suffered in a single campaign since 2013-14, when they lost seven times in their own stadium.

Sheffield United’s opening goal came from a corner, a particular weak point for the Red Devils. Man United have conceded 14 goals from corners since the beginning of last season, the joint-most in the top-flight. Only Brighton and Chelsea have conceded as many.

2 – Manchester United have lost two of their last four @premierleague home games against the side starting the day bottom of the table (also 0-1 v West Brom, April 2018), one more loss than in their other 21 such matches in the competition (W16 D4 L1). Complacency. pic.twitter.com/UTkbtaWRnP

West Ham get new year off to a flyer

With their 3-2 win over Crystal Palace on Tuesday, West Ham United achieved something they had never previously done in the club’s history: win their first six competitive matches in a calendar year.

West Bromwich Albion have lost five Premier League home games in a row for the first time since December 2004, which was also a run of five.

That means Sam Allardyce is the first manager since Chris Ramsey at QPR in March 2015 to lose his first four home Premier League games in charge of a club. A sinking ship?

Read: Thomas Tuchel is a good tactical fit for Chelsea – but that may not be enough to guarantee success

See Also: Frank Lampard has learned that not everything in life is meant to come so easily