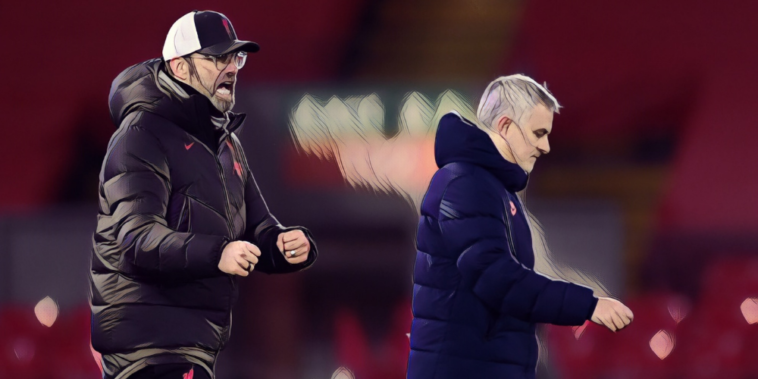 Jose Mourinho has taken a swipe at the lack of punishment for Jurgen Klopp’s touchline behaviour ahead of Tottenham’s huge clash with Liverpool this evening.

Spurs welcome the Premier League champions to north London this evening in a high-stakes encounter between the two top four rivals, just one point and one position separating the two sides at present.

Mourinho’s side will be looking to exact revenge on the Reds after slipping to a last-minute defeat in the reverse fixture six weeks ago, a contest that saw the two managers exchange words following the full-time whistle.

Mourinho spoke post-match on Klopp’s animated touchline style and has once again referenced the German’s behaviour ahead of their latest meeting, suggesting the Liverpool manager is handed preferential treatment.

“What I can say is when I didn’t behave well I paid the price,” he said. “And I paid the price in two ways: one was to see matches on TV in the dressing room and another price was big-money fines and I feel that, for some of the other guys, it doesn’t happen the same.

“It doesn’t happen the same with them.”

Mourinho also opened up on his relationship with Klopp and insists the duo are not friends, though says he has no problem with the Liverpool boss and outlined his ‘respect’ for this evening’s opposite number.

“I’m not a friend of Jurgen because I never had time with Jurgen,” Mourinho said . “When you know the person well you can say, ‘I like him, he’s my friend’ or ‘I don’t like him, he’s not my friend’.

“With Jurgen it’s five minutes before a match and five minutes after a match. What I can say about Jurgen is that he’s a colleague that I respect, that I don’t have any problem with.

“And I believe that he is the same way with me. No problems at all.”